Our resident expert beer taster GT Wharton has been doing the heavy lifting all year at The Full Pint, pulling no punches when tasting a wide array of new and classic craft beers. We are proud to present his agenda/bias free ‘Top 10 New Beers of 2019’ list for your reading and drinking pleasure.

This year’s list is limited to new recipes from American craft breweries that debuted between November 2018 and November 2019 and had in-depth reviews published. – The Editor

Allagash sadly ditched their outstanding Hoppy Table Beer but replaced it this year with a similar recipe, River Trip. Along with their flagship beer Allagash White, River Trip is the first Allagash beer to come in cans. “Bringing up the glass, you are rewarded with a delicate aroma of angel food cake, lemon squares, and faint esters like unripe pear. A soft array of fruity and grassy hops come front and center with no maltiness or alcohol to contend with. This is a hop-forward, ultra-dry beer. In the finish, River Trip evaporates off the palate, leaving you wondering if you drank anything at all. This is a superlative summer session beer that is boundlessly drinkable. It could be renamed Hop Gatorade. Even though you would not think that great Belgian farmhouse ale comes from a can in Maine, I believe River Trip captures the original purpose of farmhouse ales better than most Belgian varieties today. It is light-bodied, quenching, and most of all accessible.” Read my full review here.

This year, Sixpoint turned their Jammer Gose into a year-round offering. They also teamed up with outdoor retailer REI to release a Jammer Session Pack, a 15-pack of cans that includes five versions of the gose. I was fortunate enough to try four versions and decided to do a full write-up on the mixed berry version, though all of them were phenomenal. “After a few sips, Berry Jammer just hits it out of the park. Overall acidity is nicely tempered at a 5/10 level, but the acidity is also incredibly clean with soft lactic acid and nothing prickly or funky around the edges. The berry juices, far from tasting like melted popsicle or fruit punch, come across in a vinous manner providing a pop of sweetness and firm, leathery tannins. Lasting tannic bitterness really pushes this fruit sour to the next level. Berry Jammer combines high carbonation, berry skin tannins, zingy acidity, and just enough salt and sugar for a hands-down masterpiece.” Read my full review here. 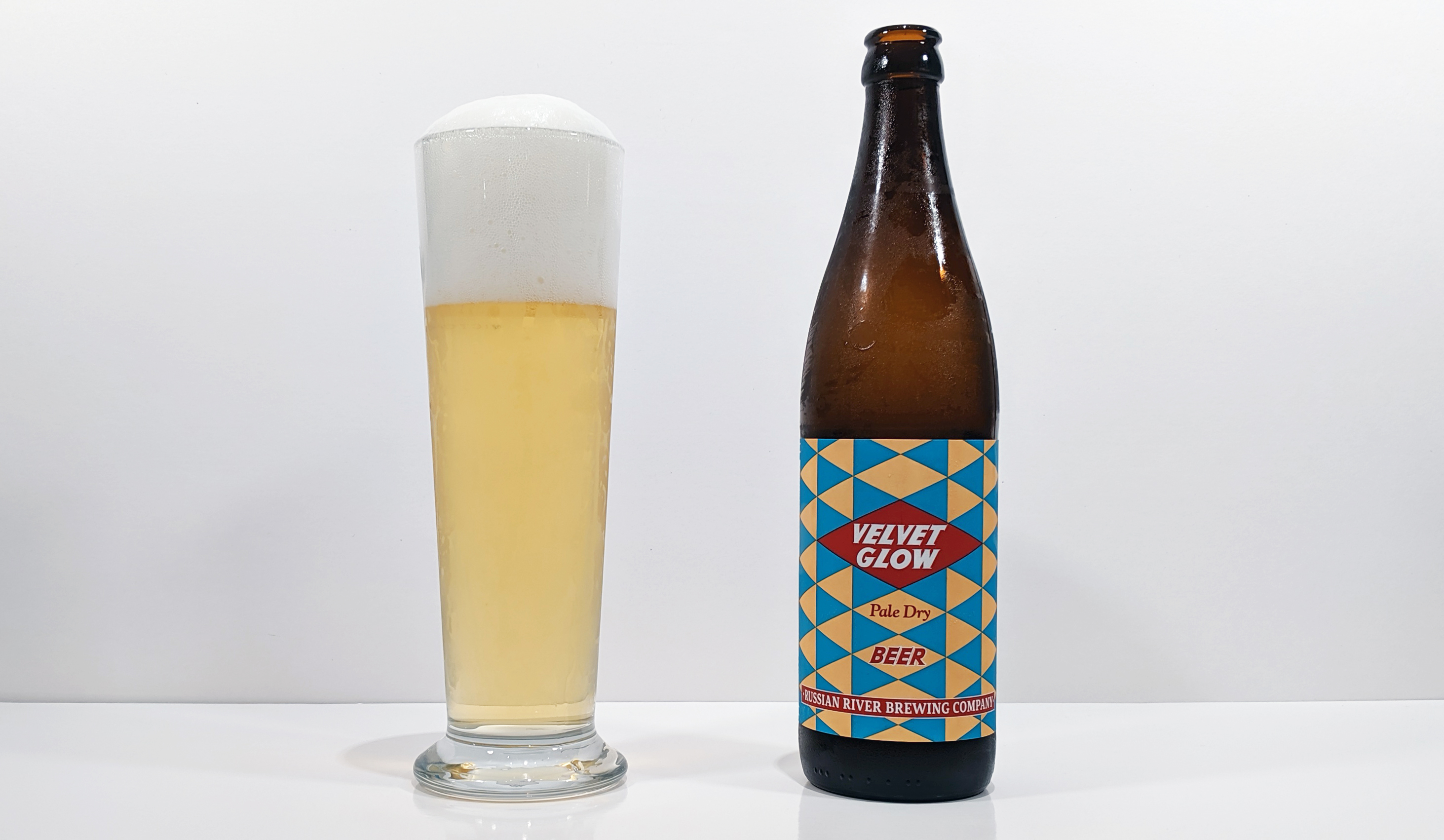 Russian River graced us with several “new” beers this year including Intinction with Sauvignon Blanc, a new version of Great Beer/Great Wine, and Velvet Glow. Like Happy Hops IPA, Velvet Glow is a brand revival from the Grace Brothers Brewery, which operated in Santa Rosa until the 1960s. “Aroma-wise, there’s tons of fresh yeast rolls and white sugar, which combine for a powdered doughnut aroma. Bright lemon is then layered atop for a freshly baked lemon squares character. In the flavor, Velvet Glow is malt-focused with minimal but not absent hoppy bitterness. Rich maltiness creates a ‘bread in a glass’ flavor but it’s met with bright lemon peel-like bitterness. The mouthfeel is spectacular with sparkling, high carbonation plus a nice coating oiliness and snappy, quick finish. There’s an evaporative quality after each sip that positions Velvet Glow as a phenomenal session lager. My biggest complaint is that I want more. This would do extremely well in 6-packs of cans like Russian River’s competition has gravitated towards.” Read my full review here.

Though we were sad to lose New Belgium to this year to macro producer Kirin, they still were able to release one of the year’s best nationally distributed IPAs. Juicifer was a major improvement over their first distributed hazy IPA, Juicy Haze IPA. “Digging in, Juicifer has so much in common with my favorite clear IPAs such as Pizza Port Swami’s or even Russian River Happy Hops. Fresh, chewy sourdough is prominent as is oatmeal and even more whole-grain flavors like bran and rye. There’s almost that raw, husky quality that I find in some Sierra Nevada beers. Chinook hops then punch through all that with a resinous verging on nutty bitterness like Brazil nut. The balance between sweet and bitter is perfect.” Read my full review here.

Stone has been on a tropical beer kick for the past couple of years. Tangerine Express IPA was a big hit as was Scorpion Bowl IPA. Vengeful Spirit was excellent too, but an imperial version had greater distribution this year that didn’t quite capture the same…uh…spirit. Tropic of Thunder was the first non-IPA to really join Stone’s overhauled, tropical-themed lineup; but it still more or less drank like an IPA. Thus, Notorious P.O.G. was an important beer for Stone to show they can excel at a non-hoppy style with a flavor profile that should attract a wide variety of palates. “Aroma-wise, this beer is loaded with tropical fruit with fresh orange juice; ripe, pink guava; and seedy, bright passion fruit all exploding out of the glass. All of that powerful fruit juice in the aroma translates perfectly to the flavor. It tastes scarily like pure fruit juice. There’s also very little sourness to this Berliner. Instead, Notorious P.O.G. is quite malty and even oily with a bready, thick base beer underneath and nicely tempered lactic acid.” Read my full review here.

Today’s craft beer landscape seems to be dominated by hazy IPAs. These murky beers have sadly converged into a quantum singularity where they are hardly discernible from one another. Thankfully, breweries like Victory are willing to take the plunge and release a super clean, clear IPA for 2019. New for this year, No Brainer IPA joins Victory’s core lineup along with Cloud Walker Hazy Juicy IPA and Twisted Monkey, a Belgian blonde with mango. “For the aroma, No Brainer is incredibly different from the IPAs I’m used to here in Southern California. You get lemongrass, super fresh bread like walking into a French bakery, buttery brioche, lemon pound cake, and tons of Victory’s famous pilsner malt that makes their hoppy lagers so exquisite. With the first sip, this beer presents as ultra-dry for the style and bitterness is thus nicely exaggerated. No Brainer is a snappy, pilsner malt-focused, grassy hop bomb that answers the question, ‘How to turn a pilsner into an IPA?’ or perhaps vice-versa. This is so dry, so clean, and so grassy hop focused; it resembles hardly any IPA I’ve ever had before. And for that reason, I absolutely love it.” Read my full review here.

Sour milkshake IPA with vanilla, graham cracker, and puréed fruit may sound appalling, but stay with me. County Fair Cobbler (CFC) is a series of beers rather than just one beer. And they are all shockingly good. I tried at least six different versions this year and each was worthy of this list. These beers tick about every flavor box imaginable. They are sweet, sour, salty, fatty, bitter, hoppy, tannic, fruit-forward – they are like Michelin-star desserts. “The aroma explodes with a dizzying variety: strawberry shortcake, peach and mango sorbet, rich pie crust, ice cream, and even rosé wine. There’s incredible depth that will keep you going for hours. Flavor-wise, CFC is like three beer styles rolled into one: tropical hop focused hazy IPA, fruited Berliner Weisse, and spiced golden milk stout. It’s a crazy beer that hits you in every direction but somehow doesn’t go overboard. The sweeter dessert side of things creates a melted sorbet flavor that is other-worldly. It’s dripping with luscious strawberries, white peaches, and mango.” Read my full review here. 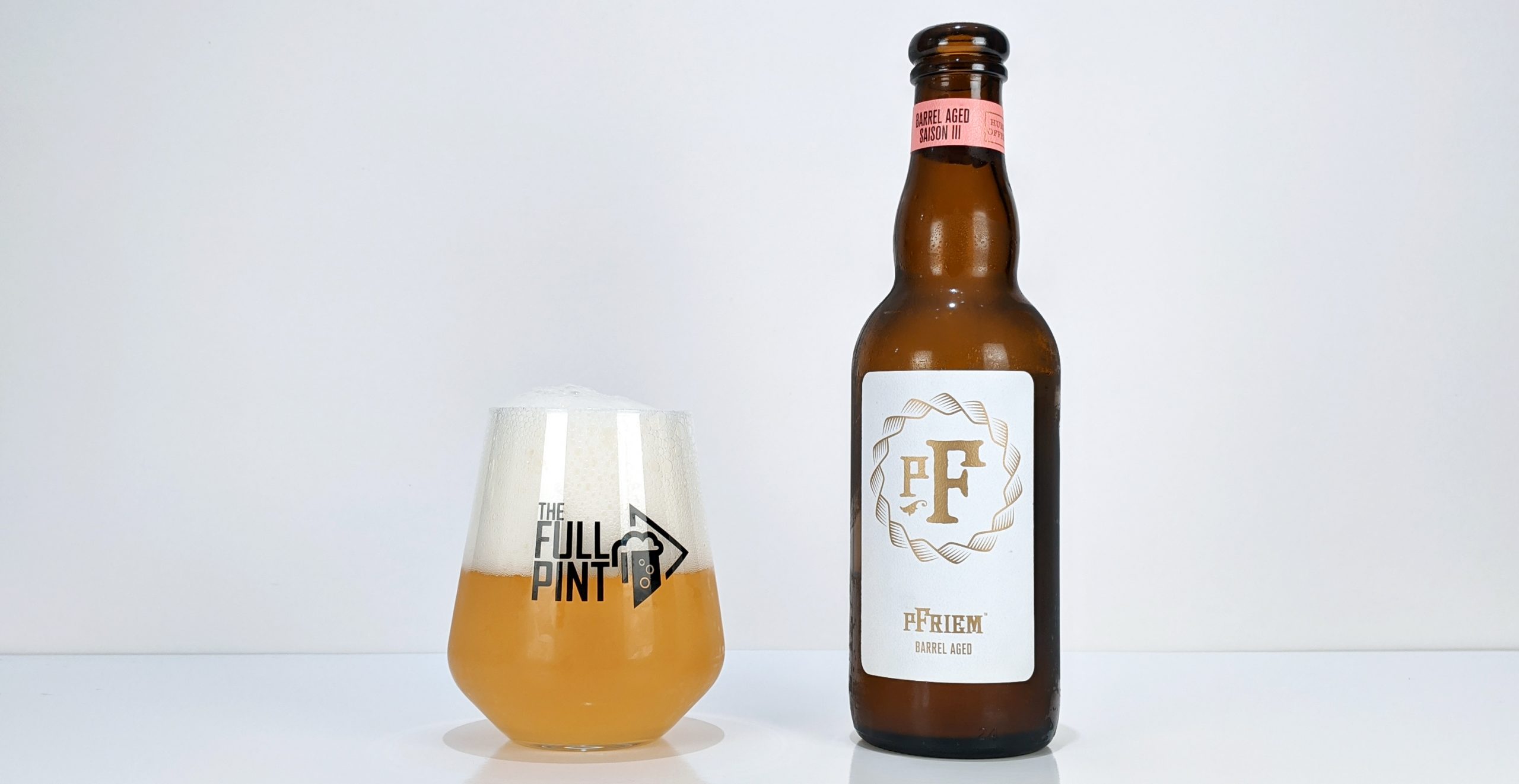 pFriem released an incredible number of barrel-aged beers this year including some fabulous Belgian-style sour ales. Their Flanders Red Kriek, Oud Bruin, Flanders Blonde, and Bosbessen were some of the best sours I’ve had from an American producer. However, pFriem really hit it out of the park with two saisons this year, Farmhouse Fleur and Barrel Aged Saison III. The latter rewards you with a symphony of gueuze-like aromas like leathery blood orange and Brett-driven barnyard funk. “Flavor-wise, Saison III is a complex mix of sensations. It’s ultra-light bodied and relatively dry with minimal sugar, but there is still firm graininess from the pilsner malt and even some sweet cream from the wheat. Barrel tannins compound with the leathery flavors from the Brett and bitter melon rind flavors from the hops to provide more than enough structure. The mouthfeel throughout is heavily aerated and buoyant giving it a soft, pillowy effect. The Sauvignon Blanc barrel provides fleeting butteriness and hints of green pear and white peach. A perfect saison in my book.” Read my full review here.

Oak-aged pilsner doesn’t sound particularly appetizing, but Modern Times pulled it off with aplomb. I’m a big fan of their regular Ice pilsner, which is now a year-round core beer for the brewery. But the foeder aging brought it to a whole new level. At least four versions of Foeder Ice came out this year, all dry-hopped with different varietals including Triskel, Saaz, Perle, and Saphir. “The aroma on this beer is just mesmerizing. Delicate, zesty citrus kicks it off reminiscent of blood orange and lime peel. This segues to malty aromas of pancake batter, fluffy buttermilk biscuit, and fresh out of the oven baguette. Atop all of that is a curveball from the heavy-toast oak foeders (think colossal barrels), which bring out bourbon-like spicy oak, black pepper, and vanilla. Digging in, Foeder Ice is simply a magical experience. It seems to glide around and evaporate, demanding one sip after another. A touch of savoriness from the wood aging gives it a unique flavor combination few beers can match. With such a delicate base beer, the foeder-aging and Saphir dry-hopping fundamentally transform Modern Times Ice from a decent pilsner to an ethereal masterpiece. So many disparate flavors converge into this dynamo of a sub-5% lager.” Read my full review here. 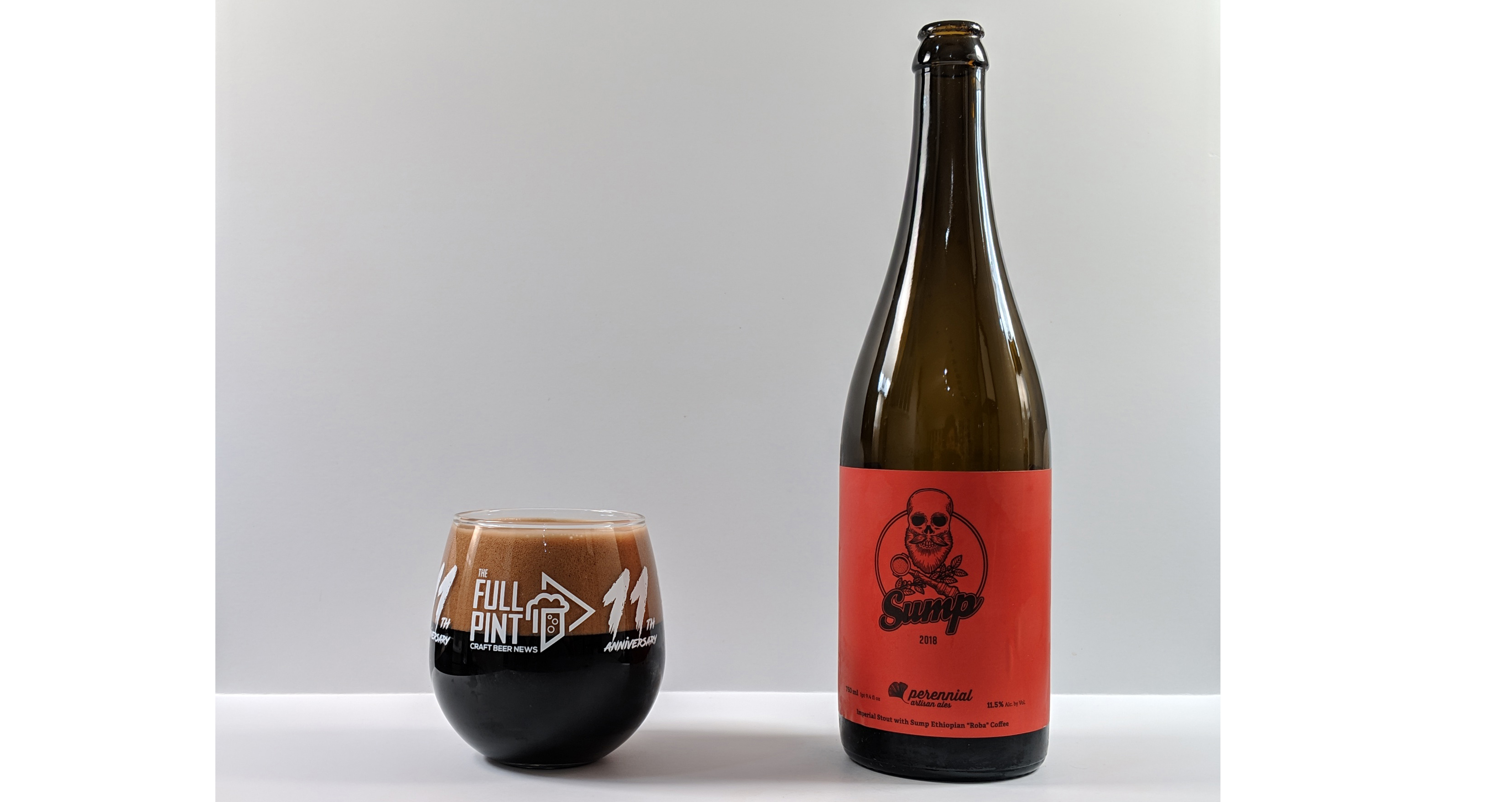 Perennial Sump has become a household name among coffee stout enthusiasts. Several different versions of the beer exist including a Colombian coffee version and barrel-aged version. After trying four different versions of Sump, I thought the Ethiopian Roba version stole the show. This ridiculously dark imperial stout rewards you with “cinnamon, dark bread, and licorice with building notes of blueberry, high-end dark chocolate, and Chambord liqueur. There is so much oil and fattiness to the texture here. It glides around the palate and has a satisfying dessert character like flourless chocolate cake with a Godiva liqueur sauce.” Read my full review here.