Product Description: Swami’s IPA is a special beer to the Pizza Port family as it was the first IPA brewed in our original location over 20 years ago in Solana Beach. With a more traditional hop profile, this beer is the quintessential example of a West Coast IPA as it showcases the fresh bitterness of citrus and pine. Swami’s is named after one of the most famous surf breaks in San Diego County, which, as perfectly depicted on the can, is always crowded with surfers and paddle boarders alike. The break itself gets its name from its proximity to a Self-Realization Fellowship, a landmark in Encinitas that is also perfectly pictured on the can. Whatever your form of meditation is, we hope that each and every sip contributes to your own self-realization! Hops: Chinook, CTZ, Cascade, Centennial, Citra, Simcoe. 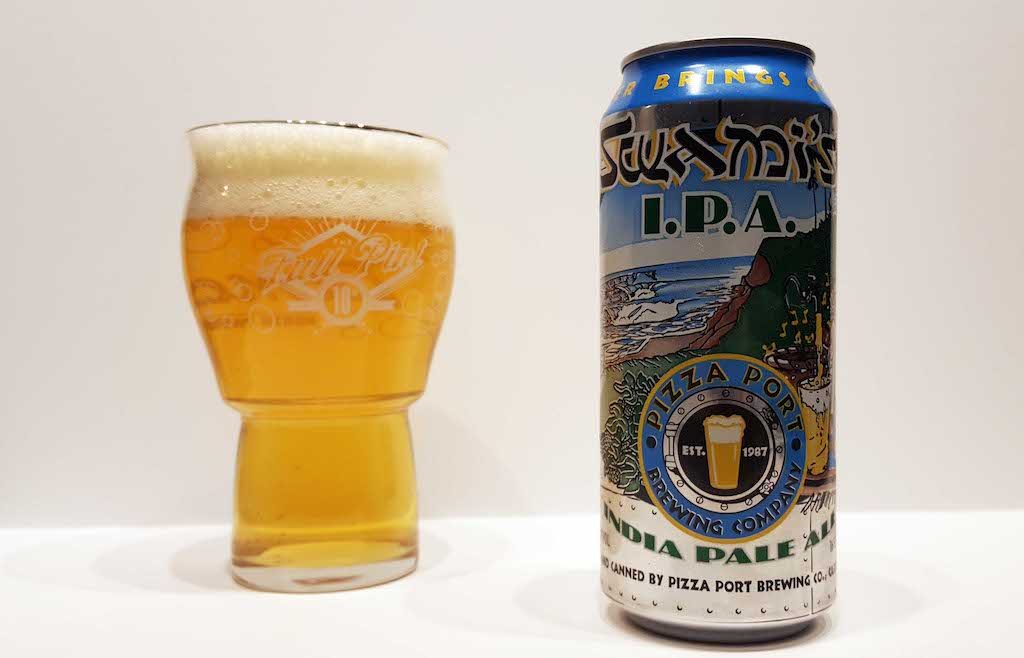 Swami’s is the most stocked beer in my fridge these days just based on price, availability, and consistency. At the brewery, Swami’s costs $13 for a 6-pack of 16 oz cans, which equates to less than 14 cents an ounce for a beer that is 6.8%. Now stack that against your typical 6-pack of 12 oz Sierra Nevada Pale Ale, which is $8.87 at Wal-mart. That is 12 cents an ounce for a beer that is 5.6%. Account for the higher ABV and Swami’s is cheaper. SNPA costs $2.20 per oz whiles Swami’s costs $1.99 per oz of pure alcohol. That means that by ounce and by ABV, you cannot possibly get better value in today’s saturated craft beer market. That is incredible. Granted, at the brewery purchase isn’t feasible for everything, but the markup at places like Sprouts and VONS is usually only $1 more in my experience for the 6-pack. And over the past few years, Pizza Port has expanded its distribution significantly. So I can’t be the only one enjoying the hell out of their flagship beer.

Sampled from a 48-hour old 16 oz can, Swami’s is crystal clear light gold to straw colored with enormous white foam with incredible retention. The aroma brings fresh orange juice, grapefruit, pineapple, and touches of herbs like chamomile and sage. As it warms and opens up, the aroma focuses less on volatile hop aromas and more on sweeter grain notes like white corn, butterscotch, and fresh dough. It’s a simpler aroma that hits all the marks for classic West Coast IPA.

At the front of the palate, Swami’s is very bitter like biting into red grapefruit pith then segues quickly to cornbread and fluffy sourdough biscuit. There’s a solid grain presence here, but it is quickly washed away by a bitter and persisting grapefruit presence in the swallow. The balance here is perfect and it’s endlessly drinkable. Let it sit around and warm up and you may get more pineapple and flashes of butterscotch, but the beer is still delicious. Swami’s is your bright, aggressively bitter IPA that should really be the starting point for those getting into this style.

Pizza Port has IPAs down to a science. Every detail from the water profile, the neutral yeast, the hop schedule, and chewy grain presence come from decades of making hundreds of amazing IPAs. Swami’s is a beer that is been around for quite a long time, debuting over 20 years ago, but the recipe has kept up with the times. (The Citra and Simcoe hops at least are new additions that could not have been part of the original recipe.)

In the future, I’d like to do a blind head to head test of Swami’s vs Bell’s Two Hearted vs Alpine Duet vs Stone IPA and other such IPAs we hold near and dear to our hearts. I really think Swami’s deserves to be in this group of classic IPAs that are still relevant today.