Side By Side Tasting: Left Hand Milk Stout Nitro – Can vs. Bottle

Product description: Dark & delicious, America’s great milk stout will change your perception about what a stout can be. Pouring hard out of the bottle, Milk Stout Nitro cascades beautifully, building a tight, thick head like hard whipped cream. Milk Stout Nitro is also good to go from the can with widget inside technology, or like a pro in a glass. The aroma is of brown sugar and vanilla cream, with hints of roasted coffee. The pillowy head coats your upper lip and its creaminess entices your palate. Initial roasty, mocha flavors rise up, with slight hop & roast bitterness in the finish. The rest is pure bliss of milk chocolate fullness. 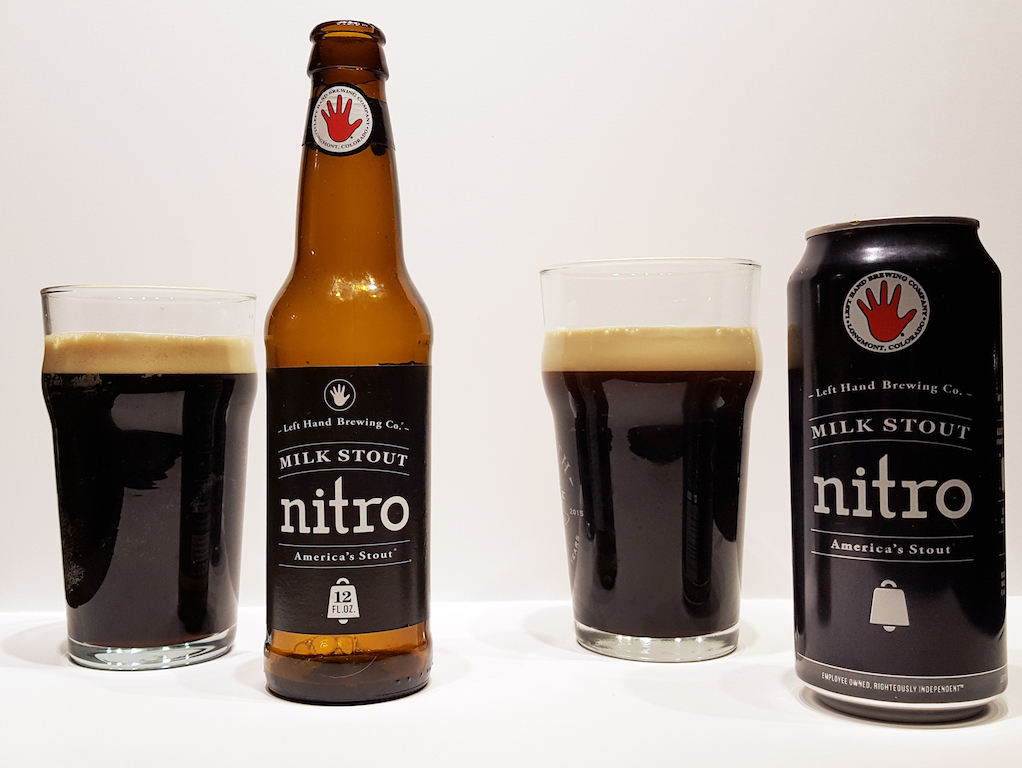 I’ve not actually tried the nitro version of this beer, so this will be a new experience for me. Not too many craft breweries even sell bottled/canned nitrogenated products. Modern Times has been doing it recently, but I haven’t ever achieved that real Guinness type of nitro looking cream head from their beers. A quick google search shows that this beer is really the only game in town. Versus Left Hand’s regular milk stout, I love the minimalist design on the nitro products. It works especially well with the can – standing out on a crowded shelf space.

Sampling the bottle first (best by 02/05/2018), the cap says to “pour hard,” but I didn’t read that in time. If you pour this normally like I did, you get relatively weak foam, which sort of defeats the purpose of the nitro. Halfway through I poured from a higher height and you finally get some creamy tan foam to form. But there’s no reverse cascade effect like you see from Guinness products. Still, you get a nice layer of creamy foam that persists indefinitely until you’ve finished the entire beer.

The beer looks jet black in the glass, but it is more of a clear deep brown color when held up to the light. The aroma is fairly muted with touches of tootsie roll and milk chocolate. Flavor-wise, this is similar to Guinness in that you get a very light body that betrays your lips since you are drinking a “dark beer.” The lactose addition that makes this a milk stout usually manifests itself in extra body (extra sugar), but this one is just barely sweet. Similarly, the roast character is mild and bitterness is restrained at only 25 IBUs. Compared to the canned version, this one’s mouthfeel feels dull, but it could be from my feeble attempt at pouring this correctly. The recipe does include oats, but the mouthfeel doesn’t have a silky feel to it. Overall, this is about as mild as I can imagine for a stout. That may be a good thing, though, especially for those averse to powerful roast flavors.

On to the canned version. This one is clearly marked with a best by date of 03/12/2018. Though the can size is 16 oz, the label reads 13.65 oz. That may be because some of the space inside is not beer liquid but is taken up with the nitrogen gas. Crack open the can and you get a really unique woosh sound that reminds you this is not normal beer. With a regular pour into the nonic pint glass, the canned version provides you with that perfect nitro stout pour with reverse cascade of brown foam in the center of the glass. At the top, a two-finger tall layer of micro-bubbled cream foam persists indefinitely until all the beer is gone.

The aroma on the canned version is more assertive with sweeter notes like raisinettes, vanilla, burnt sugar, caramel, and more tootsie roll expected in this style. For the mouthfeel, the canned version is a big improvement. It is creamier and faux silky thanks to the nitro bubbles on the tongue. This version tastes sweeter too with that expected lactose quality that was missing in the bottled version. But the roast character and bitterness in this one are absent. Since the flavors and the aroma focus on the Munich and Crystal malt additions rather than roasted barley, I would think this was a German Dunkel or similar if sampling blind. The body is simple and clean, so I would say some sort of amber lager over any ale.

Once both beers warm up to room temperature, the differences between them mostly subside. Both versions are good in their own right with my preference to the canned version for the better mouthfeel and visual aesthetics. And even though I typically shy away from milk stouts, these are less sweet than I expected. But then the roastiness and bitterness you expect in a stout just isn’t there in a meaningful way. That makes the beer a tad boring for the enthusiast, but I can see why this appeals to the larger American beer audience.