Product description: The flavor: cold. The crushability: maximum. Ice is our very first pils, and it brings the noise. Hopped with Czech Saaz and Australian Summer hops, before, like, so many weeks of lagering, Ice packs the flavor of the mighty San Diego mountains into a compact, low-ABV package. 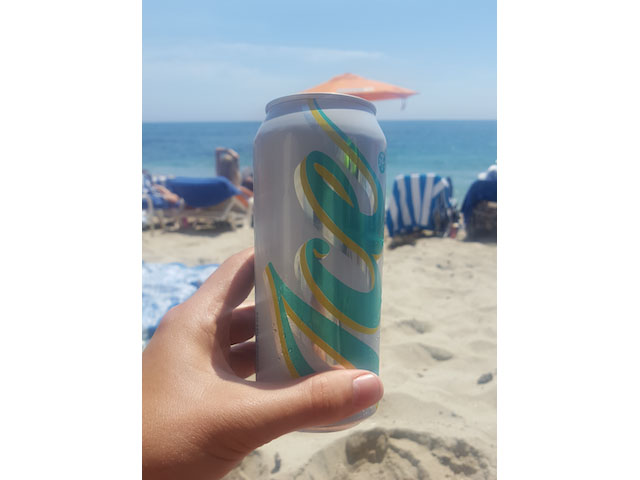 Combine two of my favorite things, Modern Times and pilsner, and this is the result. Modern Times Ice has now hit wider distribution with its stunning, retro can artwork. Originally, this was a tap-only offering that I felt was a solid attempt at the style but with a few kinks to work out. I’m happy but also surprised to see MT pushed forward with a pilsner in today’s world dominated by IPAs. Of their core brands and even seasonal beers, not even one is a lager. But I think with the success of Firestone Walker’s Pivo Pils and probably more relevant, the market success of local rival Pizza Port’s Pick Six Pilsner, that MT found the courage to pursue this oft-snubbed style for their July special release.

Into the pilsner flute, this is clear, pale straw in color with roaring carbonation. A thick meringue head settles down after a minute or so leaving behind clouds of foam along the glass. The aroma is fresh and inviting with mellow key lime pie, fluffy biscuit, and thick orange marmalade. There is a macro tinge of white corn grits and oatmeal that I would expect with pilsner, but that gives it the charm. In the body, Ice is quite heavy-bodied for the style with tons of sourdough biscuit. It isn’t complex allowing the pale malt character to shine through without any hoppy interruptions. The finish is lengthy and well-balanced with medium sugar, thick doughiness, and neutral bitterness. Flashes of chalk and paper in the mouthfeel hark back to the old kinks that needed working out from the original recipe I tried on draft. Even so, the high, persisting carbonation makes for one refreshing beer.

My wife did mention it smelled and tasted like a macro pale lager. I might have teared up a bit at this point. Fortunately (or unfortunately) for her, we happened to have one such macro pale lager in our fridge. I cracked one open and we did a side by side. To be fair, they look nearly identical and even smell similar. But as the macro beer warmed up after a few minutes, it smelled like apples as well with some candy corn and honey. The big difference was that the macro lager tasted like apples and the body was waterier with a baby powder-like finish. MT Ice is a thick beer in contrast, heavy-bodied to be honest, with so much more substance and flavor. I think in the back of a craft beer lover’s mind, Modern Times Ice may exhibit the aesthetics and flavors we equate with macro pale lager. That’s somewhat fair, I guess, as craft pilsners today probably taste similar to how macro lagers tasted decades ago. And Modern Times Ice makes no attempts to spin or modernize the style. Crazy aroma hopping, exaggerated bitterness, or boosted alcohol are passed up in this recipe for something subtler and more traditional.

Overall, Modern Times Ice is a simple, traditional pilsner with minimal bitterness. If you have a friend or family member who is die hard macro and won’t touch fancy craft beer, this would be the perfect beer to introduce them.