Product description: Our original single IPA made with Simcoe and Amarillo hops “in harmony.” 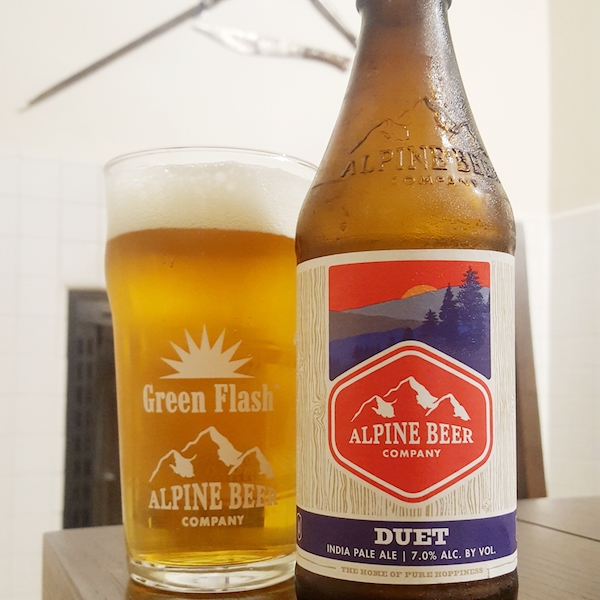 I’ve taken a long hiatus from buying Alpine bottles since the Green Flash takeover, so it is probably time to revisit my favorite of Alpine’s beers, Duet. Originally packaged in single 22oz bombers, the Green Flash takeover brought this recipe to a larger audience with wide distribution in 6-packs of 12oz bottles. Perhaps it will be packaged in cans soon as well since Alpine has recently been canning Truck Trail pale ale and Willy wheat. Unfortunately, these bottles have no bottling date – just a best before date reading Nov 30 2017. Not very helpful as the “freshness period” is unknown. I can say with certainty that Duet, an IPA, brewed in July is not going to be any good at the end of November. It’s the same deal with Green Flash bottles. That’s a big turn off for me.

Duet is clear, bright gold in color generating a rich, white head with good retention and lacing. It looks perfect. In the aroma, it is maltier than expected with thick honey, Hawaiian bread rolls, fresh grist, and something herbal like chamomile and mint. It’s a bit strange, but nothing of concern.

The flavor begins with a small alcoholic bite, settling down to starfruit and softer flavors of vanilla cake and buttercream frosting. It’s mildly bitter and there is great balance with touches of sugar. The IBUs are listed a 45, which is lower for the style. The mouthfeel is slightly salty and buoyant giving it a soft body rather than the aggressively bitter, nutty, heavy bodied IPAs that continue to dominate the market. In the mid-palate and finish it’s a bit chalky and dry but never harsh or astringent. That makes me think this bottle isn’t super fresh. With that said, it is still very good and refreshing in a way I would expect from an APA or Session IPA.

I think this larger batch, Green Flash-brewed version captures the original recipe well, though it lacks the perfection of the original. Namely, it lacks in the aroma department. Overall, this was highly enjoyable even if not at peak freshness.