Product description:
“A birthday is just another today.
Today will be just like yesterday, tomorrow.
Tomorrow will be the same as today, just completely different.
I brewed this beer for my friend Gabe’s 40th birthday on the suggestion of his wife Jacenda. Two finer people the likes of which
I have ever known.
-Ron” 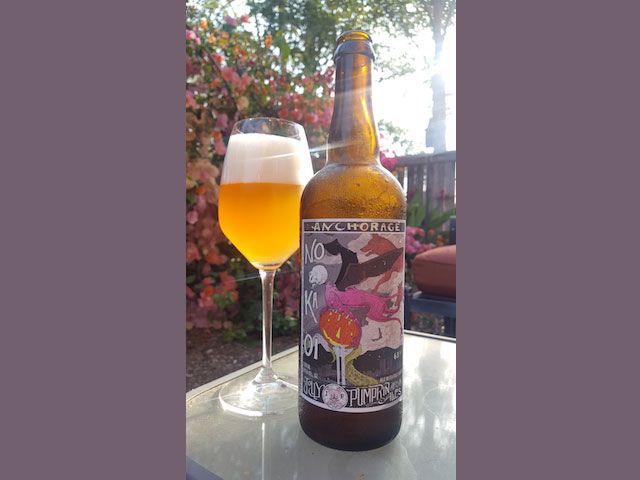 At $19 for 750mL bottle, this may be pricey, but what is inside is sure to live up to the reputation of these two outstanding American sour producers. This bottle is dated from December 2016, but since it’s a bottle-conditioned sour, the age shouldn’t be a big factor here freshness-wise.

In wine stemware, the beer is hazy, glowing white peach juice in color with rocky, persisting white foam, which is quite odd for an American sour but not for something like Belgian geuze. Streaks of brown yeast sediment look like cocoa powder dusted atop a cappuccino. The nose is absolutely phenomenal. In keeping with the geuze comparison, No Ka ‘Oï brings out the best of lambic producers Girardin and Drie Fonteinen with powerful Brett, cedar, wet wood, satsuma orange, and grapefruit zest. The Brett here brings a damp wine cellar and cobwebby character. Mesmerizing…

The flavor matches Girardin and Drie Fonteinen geuze with lower acidity and a focus on leathery grapefruit peel. The label itself has a nice sourness level indicator, which reads 3 out of 10. It could say 2 out of 10 and I would agree. The acidity is so low that I would say this is more just a Brett beer, but there is a lot more going on in the palate that reminds me of the best Belgian geuzes with perhaps extremely well-integrated lacto/pedio character. And though Brett is the focus here, it isn’t overly dry and astringent like some Brett-only saisons. Delicate flavors of satsuma orange, perfumed oils, and grapefruit juice dance around the tongue with tightly-bubbled, tingly carbonation. There’s tremendous depth of flavor here where it can’t just be picked apart. Fruit additions are mentioned on the label (raspberry and lime peel I found online as they aren’t on the label itself), but I can’t taste either of these at all. Perhaps the lime peel in the background accentuates what I detect as grapefruit zest and adds to the leathery, citrus peel quality. The beer is also slightly salty but not acetic by any means. This gives it some buoyancy in the mouthfeel. For the finale, there is some mothball/cobweb/cellar woodiness that dries it out.

Really, this has one of the best mouthfeels of any beer I’ve ever tried – right up there with the best from Girardin and Drie Fonteinen. It’s impossibly soft while maintaining the best characters of grapefruit juice: zesty, leathery, bright acids. It’s scarily drinkable like Gatorade after a workout.

This is some top shelf stuff here, about as close to geuze as possible outside of Belgium. No Ka ‘Oi means “the best” in Hawaiian. That can’t be overstated.