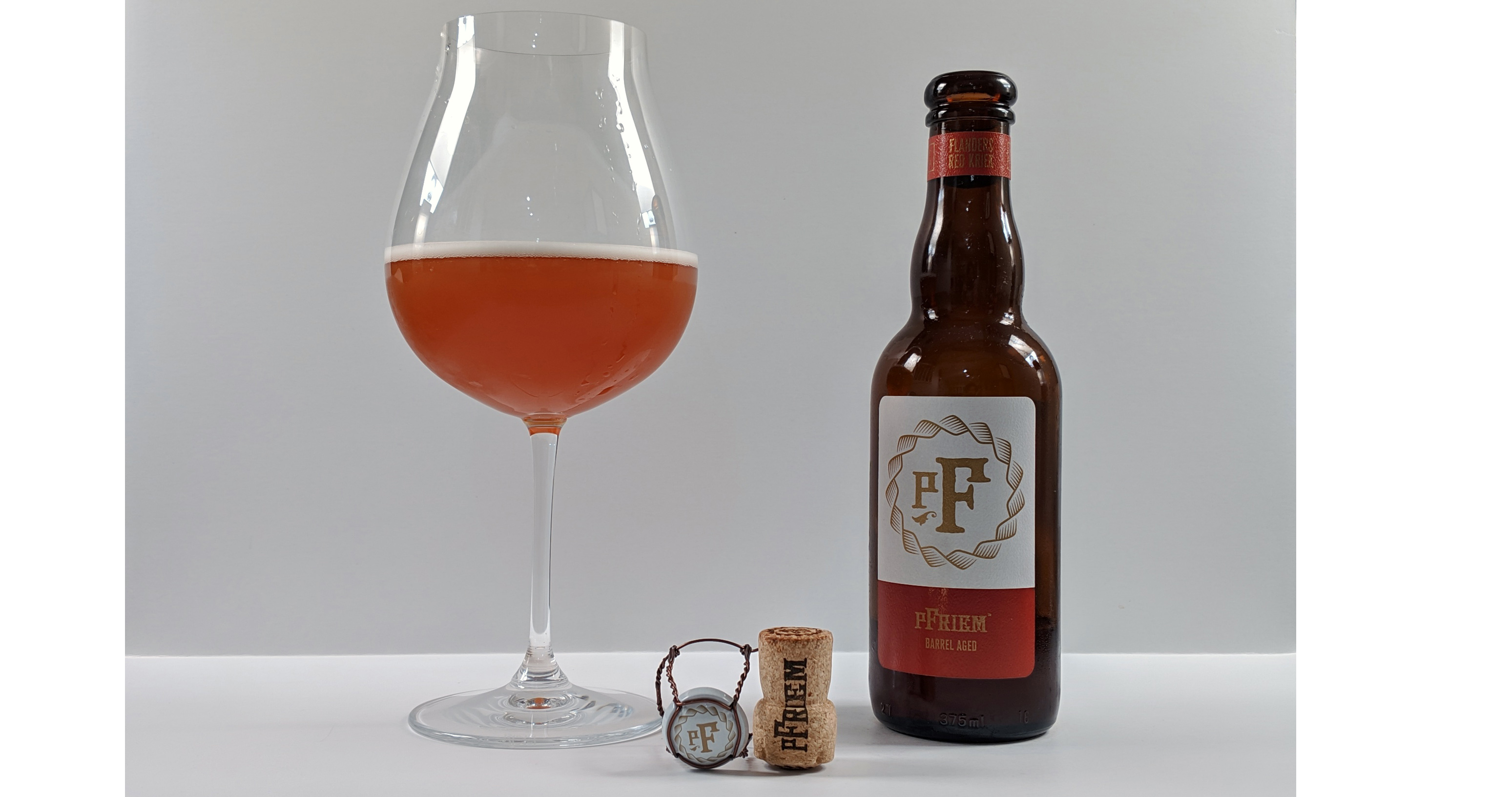 I recently had a chance to sample pFriem’s newest winter release sours, which include a Flanders-Style Red Ale, Flanders Red Kriek, Oud Bruin, and a Flanders-Style Blonde Ale. Because they were so good, I’m going to be reviewing three of the four, leaving out my least favorite of the bunch. pFriem’s unfruited Flanders-Style Red Ale (look for the pink neck label) was considerably less interesting than the Kriek version. Because the unfruited version serves as the base beer for the Kriek, I don’t think an in-depth review is necessary.

The presentation of pFriem’s Flanders Red Kriek is predictably impressive. The label and design language – for their whole lineup really – is my current favorite in the craft beer industry. Each beer looks so regal, sophisticated, and it primes me to take them seriously. The Kriek stands out from their other barrel-aged sours with a red lower half of the obverse label. But that main label just says “pFriem Barrel Aged.” Look at the small neck label for the actual beer inside.

With minimal effort, the cork pops out of the 375mL bottle with ideal force that sounds like bottle conditioning went perfectly. (This beer has considerable sediment at the bottom, so keep that in mind when serving.) Into wine stemware, pFriem’s Flanders Red Kriek is a clear orangish amber with modest beige foam. Though head formation isn’t huge by most standards, it is quite impressive for a sour ale.

Bringing up the glass, the kriek has an intense aroma that is immediately recognizable as cherry, or more exactly, the aroma of cherries that have gone through the refermentation process in oak barrels. Lambic lovers that dream of Cantillon Kriek will get that familiar aroma from pFriem’s version. Sharp phenols and intense cherry skins dominate the nose with an almost anesthetic-smelling, medicinal quality that is actually perfectly normal for kriek.

After a few sips, the flavor matches up with authentic Belgian kriek as well. Carbonation is very high with bubbles dancing around in the mouth, which brings vivacity and a refreshing quality. The cherry skins and tannic oak barrel bring a spicy, numbing flavor that syncs up with the intense phenols. This kriek is tangy, nicely leathery, but also well-mannered. My favorite aspect is that pFriem has figured out how to modulate overall acidity. Most American sour makers and even several Belgian lambic producers are perfectly happy with selling palate-wrecking sour ales that make you pucker and wince and warrant no more than a few sips before becoming undrinkable. pFriem’s kriek is sitting at a modest 6/10 acidity level, which is brought about by a super clean mix of lactic acid. No acetic acid (vinegar) rears its head, which I expect with Flanders-style dark sours. Compared to the unfruited base beer, it is difficult to pick out the Pinot Noir barrel, but that is simply a testament to its intense cherry character.

Some enthusiasts may be taken aback to see pFriem’s Flanders Red Kriek isn’t red or pink-colored and lacks the hot pink foam of krieks that typify the style. That may simply be a product of the Royal Anne cherries themselves, the amount used, or the time spent in the barrel. (The older the lambic, the more those hot red fruit juice colors dull out to orange.) The good news is that despite appearances, pFriem absolutely nailed it here! I can’t think of a more difficult, involved beer to pull off than authentic fruited lambic. It’s phenomenal in my opinion.