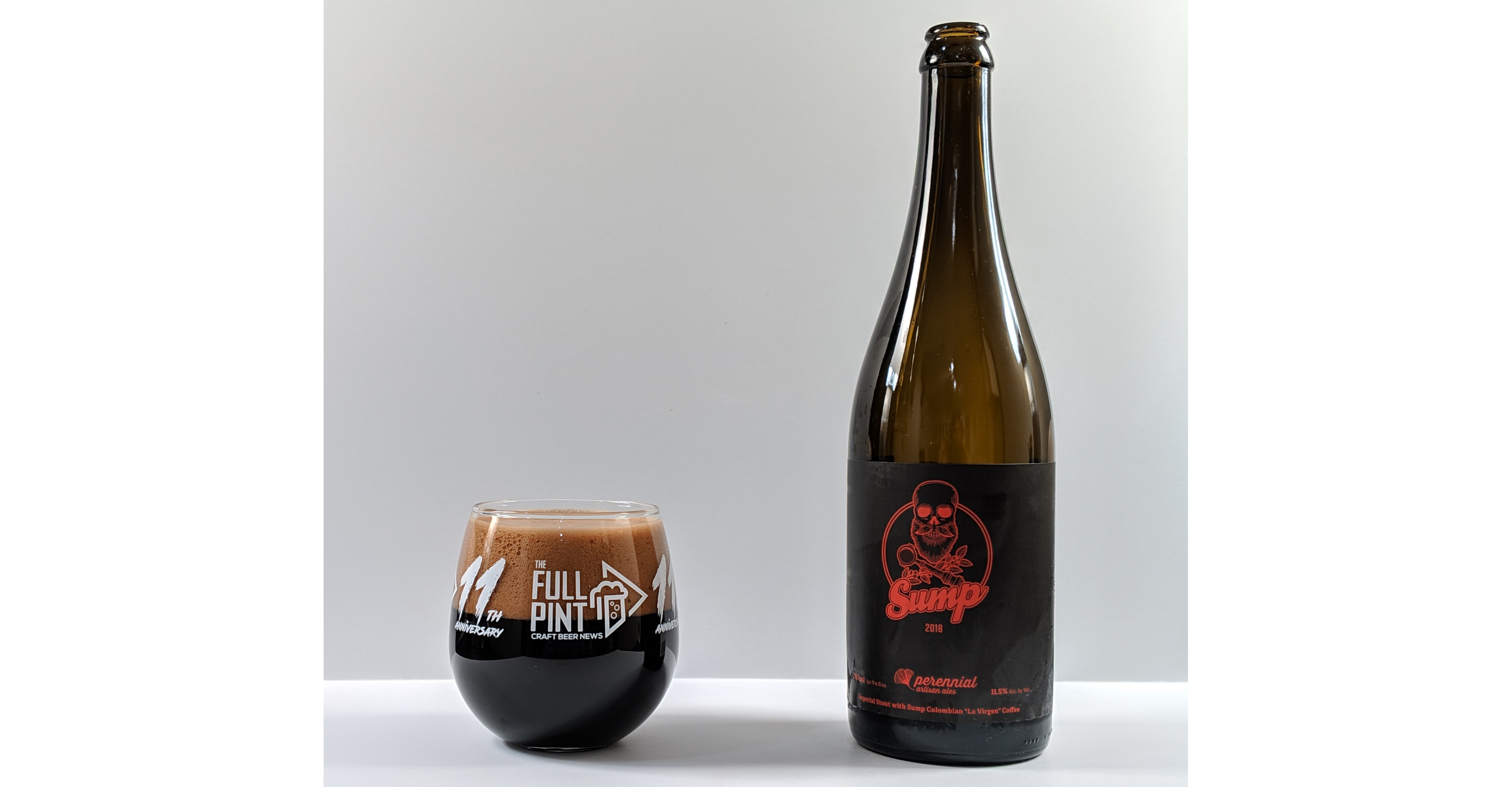 Consider this a companion review to the Ethiopian coffee version of Sump, which was mind-blowingly delicious. So, how does the Colombian coffee version compare? Now, some readers may be asking, “Hey, why are you reviewing so many Perennial coffee stouts back to back?” Well, I’m just following instructions. These coffee stouts are meant to be drank ASAP. In addition, trying them back to back allows me to do a direct comparison.

Like the other Perennial imperial stouts I’ve been reviewing lately, this one is incredibly opaque black in color. There’s no light penetration even when pouring the beer giving it a gluggy, used motor oil appearance. Once in the glass, beautiful dark brown foam rises up with nano-sized bubbles that create a thick nitro-looking head.

The nose begins with familiar dark bread, licorice, and cocoa powder. But unlike the Ethiopian version, which had many subtle layers of fruitiness and hardly anything I would call a typical coffee aroma, this version is completely different. Intense roasted coffee and dark chocolate dominate the nose with touches of grilled lemon. Alcohol vapors combine to give it a Godiva liqueur smell. As it warms, sweeter milk stout aromas of fudge and toasted marshmallow take over.

Flavors tend to be more straightforward in this version. Indeed, the difference in coffee varietal is fundamentally transformative. Earthy, bitter coffee flavors are cranked up to the maximum here with so much roast that it leaves a lingering lemon-like acidity. A silky rich palate is still there in the background, which keeps the beer from being astringent. Meanwhile, intensely bitter dark chocolate pushes overall bitterness to a 9/10 – much higher than the Ethiopian version. Another difference is that this version does have a little bit of an alcohol sting that its counterpart did not have. The overall beer is excellent, but it lacks the fun interplay of dark berries and exceptional oiliness in the Ethiopian version.

My overall takeaway is that the Colombian coffee version of Sump is very familiar. I had never tried any version of Sump until the Ethiopian version earlier this week. That beer was one-of-kind and incredibly special. This version, I hate to say it, tastes like so many other imperial coffee stouts I’ve had before. It’s hard to find something unique here. Still, it is outstandingly good and would impress most imperial stout and coffee lovers alike. If you love in-your-face, intense coffee, then this is the version for you. On the flipside, there’s little finesse or subtlety that characterized the Ethiopian version. If you get anything from this review, it should be that the coffee used in these beers is incredibly important. It can change everything from the aroma, flavor, and even the mouthfeel at a fundamental level. The Colombian version is very good, don’t get me wrong. But between the two, I greatly prefer the Ethiopian “La Roja” release.