(Brooklyn, NY) Sixpoint Brewery’s Jammer brand is back for the summer and it comes with some exciting new additions. The original Jammer is back for its fifth year and will, again, return alongside Citrus Jammer, which will be available throughout the summer. With the success of the Jammer family, and overwhelming positive fan feedback, Sixpoint will make Jammer available year-round as part of its core lineup. Building on the success of Jammer and Citrus Jammer, Sixpoint will also launch the new Jammer Session Variety Pack that will feature Jammer and Citrus Jammer alongside three new varieties—Berry, Tropical and Ruby—in a 15 pack of 12oz cans. 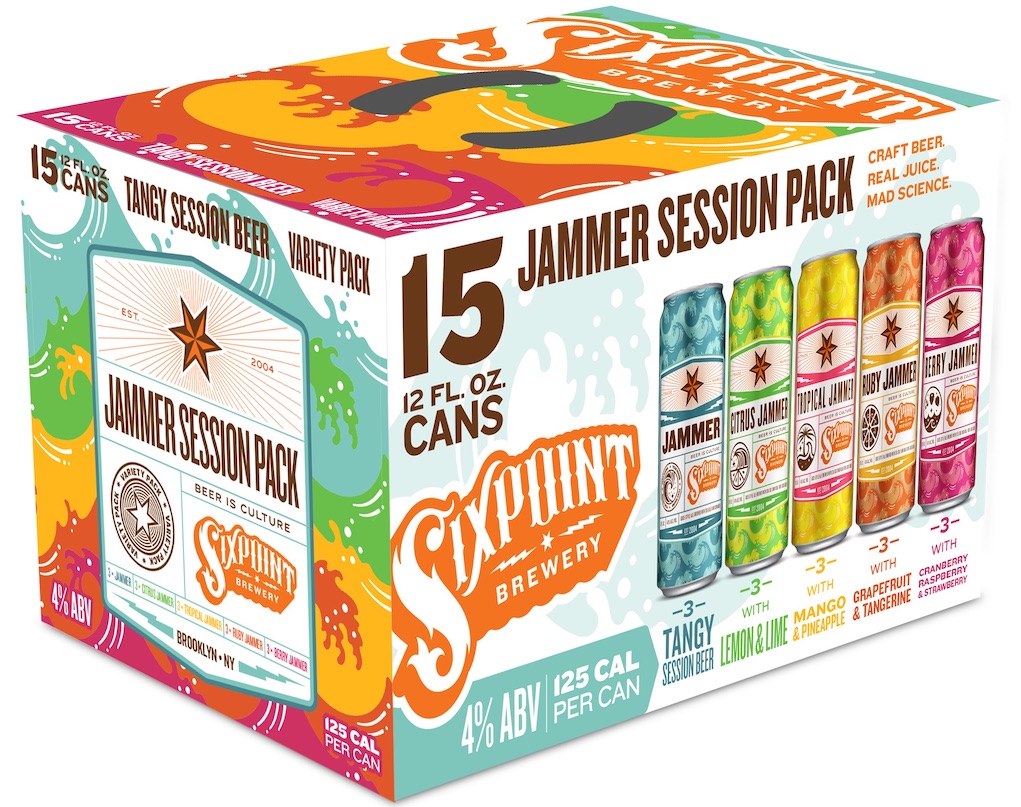 “The Jammer series is the perfect lifestyle beer for the active craft beer fan,” says Eric Bachli, Sixpoint’s Brewmaster. “At Sixpoint, we’ve always been huge fans of the traditional German gose, with its quenching repeatability. The original Jammer honors that heritage with a similar flavor profile, and, more and more, this refreshing formula is resonating with today’s drinker. The beer style is represented on the package as ‘Tangy Session Beer’ to better capture the gently tart, refreshing, super repeatable experience of drinking a Jammer. It’s brewed in the tradition of a classic German gose, with sea salt, coriander, and a tart element, but at 125 calories and 4% ABV, it’s the type of beer you want to drink as part of a long session. It also serves as an excellent base for experimentation with other fruit profiles.”

Berry Jammer is made with a blend of real raspberry, strawberry, and cranberry juice. It balances delicate sweet flavors from strawberry and raspberry with a nice push of tartness and enhanced drinkability from the tang of cranberry.

Tropical Jammer is the lushest of the Jammer’s, with juicy mango and pineapple giving an up-front kiss of sweetness balanced by just enough tang from the base gose.

Ruby Jammer is amazingly refreshing—grapefruit’s bright profile complements the tang of Jammer beautifully. It might just replace your morning grapefruit.

To support the 2019 debut of the newly expanded Jammer line, Sixpoint developed a marketing campaign tabbed “From Sea Level to Snow Caps” that embodies the active positioning of the Jammer lineup.

“With a super refreshing taste and lower ABV, Jammer is the ideal beer to come along for your crazy adventures from sea level to snow caps and everywhere in between,” Derek Detenber, Chief Marketing Officer, Sixpoint Brewery said. “The program will include on and off premise activations throughout the Sixpoint footprint, along with a heavy dose of traditional advertising, social media marketing and user generated content as we invite Jammer fans to bring us along for their adventures. We will also be partnering with REI to position the Jammer brands as the ultimate adventure beers.”

Select REI classes and excursions in the New York and surrounding area will be followed by Jammer happy hours. Sixpoint Marketing Manager, Max Nevins, weighed in on the partnership: “I can’t think of a better partner than REI to help launch the Jammer series, beers which are perfect for any outdoor activity, sun or snow. We were thrilled when they reached out to us about working with them on events that perfectly line up with our values, like nature conservation and clean water. Since then, the partnership has grown into something much bigger, allowing us to bring REI’s curated experiences — from bouldering in Central Park to Hiking in the Hudson Valley — to our fans.”

Michael Martin, NYC Tri-State Coordinator for REI, said, “At the co-op we believe that a life outdoors is a life well lived and that the outdoors is a place for everyone. We are thrilled to partner with Sixpoint Brewery, who share our vision and love for the outdoors. Together, we will connect New Yorkers to each other and to our beautiful and compelling public lands from sea level to snow caps. Both REI and Sixpoint have built our brands upon a rock-solid set of ethics and commitment to community. What better beer to feature than Jammer, which is lower in calories and has the replenishing qualities of electrolytes from sea salt. It’s the perfect way to refresh after our excursions. We look forward to all aspects of our collaboration and partnership and look forward to getting you outside in a new, fun, and memorable way.”

You can find all the Sixpoint x REI Excursions on the Adventure Map, which is going live with a full list of events in early April.

“Our formulation team spent the last year working on these new Jammers. Each beer is as complex to formulate and blend as the most prestigious barrel-aged master blends—it was intense, but we were informed by our work the previous year on the Citrus variety,” said Bachli.  “These Jammers feature a delicate balance of tartness, sweetness, and salinity, so with each fruit it’s a new challenge. The team couldn’t be more amped to drop all three of these new flavors. These innovative formulations, the Sea Level to Snow Caps program, and great partnerships are going to make 2019 officially the summer of Jammer!”

Sixpoint was created in an 800-square-foot garage in Brooklyn, New York City, in 2004 by award-winning homebrewer-turned-professional Shane Welch. In 2018 Shane passed the torch to Brewmaster Eric Bachli, a former research scientist whose formative craft beer experiences were shaped by Sixpoint beers such as Resin IIPA. Sixpoint is now partnered with Victory and Southern Tier Brewing, under the Artisanal Brewing Ventures platform, to combine the experience of the breweries and unite these legendary brewmasters under one roof.

The Brewery’s name and symbols come from an amalgamation of the Nautical Star and the German Brauerstern (Brewer’s Star), which was a medieval mark of quality for German brewers. Sixpoint’s motto is “Beer is Culture,” to highlight the human trajectory—the earliest human civilizations were founded upon the cultivation of cereal grains for making beer.

The Mad Scientists at Sixpoint seek to honor the heritage and craft of brewing by designing unique formulas to perpetually inspire the creativity, collaboration, and culture that is generated by beer.