Official description: Happy Hops was originally brewed by the Grace Brothers Brewery in 1944 right here in Santa Rosa! Their brewery went out of business in the 1960s, but we wanted to resurrect “Happy” and a new fun beer for him to enjoy! It is also a way for us to pay homage to the Grace Family and their brewing pioneer history. Happy Hops is an incredibly hoppy India Pale Ale with an immense hop aroma and flavor and mild bitterness. 6.5% ABV 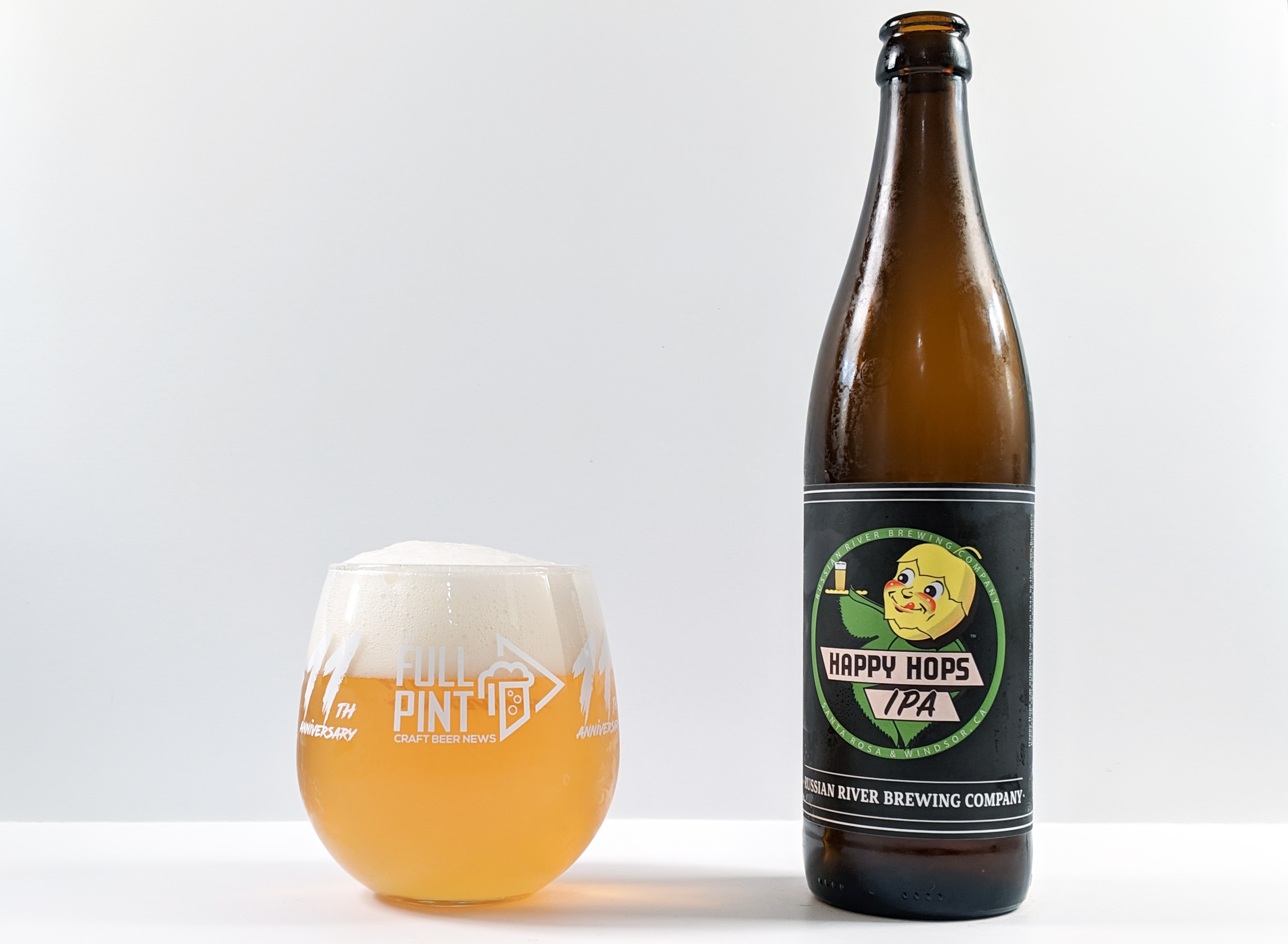 Russian River has gained an impressive cult following over the past decade for both their barrel-aged sours and their IPAs. Pliny the Elder and its tap-only, triple IPA cousin Pliny the Younger are some of the most sought-after IPAs in the world.

Though it has gone through several iterations as a tap-only offering at the brewpub in Santa Rosa, Happy Hops is new to the scene in the sense that it is now bottled and distributed as of last year. This latest version utilizes a fully modern recipe that includes Amarillo, Azacca, Brewer’s Gold, Cashmere, Centennial, Citra, Mosaic, Simcoe, and Strata hops. In other words, all the best hops out there!

I’m sampling this from a 510mL bottle that was packaged on 3/18/19 thanks to an easy-to-find box in the lower left corner of the label. I’m not sure what a typical price is for a bottle, but my local marked each Happy Hops at a whopping $9 per bottle. (This is the downside of Russian River IPAs. Demand is incredibly high, but supply is far too low.)

Into my glass, Happy Hops is clear, pale golden in color with ample meringue-like foam that sticks around for a couple of minutes before collapsing. From the get-go, there’s a beautiful nose of fresh citrus ranging from powerful white grapefruit to sweet mandarin orange. Layered on top is an almost stinky, overripe tropical melon character that’s a hallmark of some of the more modern hop varietals used. And as it breathes and warms up, sweeter notes join in like birthday cake with vanilla frosting.

After taking a few sips, Happy Hops punches pretty hard with white grapefruit bitterness peaking at a 7/10. Sweetness is a touch lower than I expected at a 3/10 making it just a bit too dry for my tastes. Though that semi-dry body does help accentuate overall bitterness, which may be a big plus for some IPA lovers. A biting, sharper finale closes things out for what ends up being a super clean, no frills IPA.

Happy Hops is remarkably straightforward – a simple, no-nonsense IPA. Its cousins Blind Pig and Pliny the Elder are famous for being hop forward and ditching caramel malt, a common IPA recipe addition for body and balance. Happy Hops continues that theme but is a little toned down bitterness-wise and seems lighter bodied than Blind Pig, though I still need to sample these back to back. I think it slots well between these two classics and is sure to be a major hit for hardcore IPA fans.

Happy Hops holds its own with the best modern, clear IPAs out there such as Pizza Port Swami’s and Beachwood Amalgamator. However, given its scarcity, price, and outdated format; it remains more of a novelty tick for me vs. an everyday beer I can stock the fridge with.

Hopefully, now that Russian River has completed their brewery expansion at Windsor just north of Santa Rosa, we’ll start to see more of it in our region at lower prices and, fingers crossed, in more modern formats like 6-packs of 12oz cans. One can only dream.