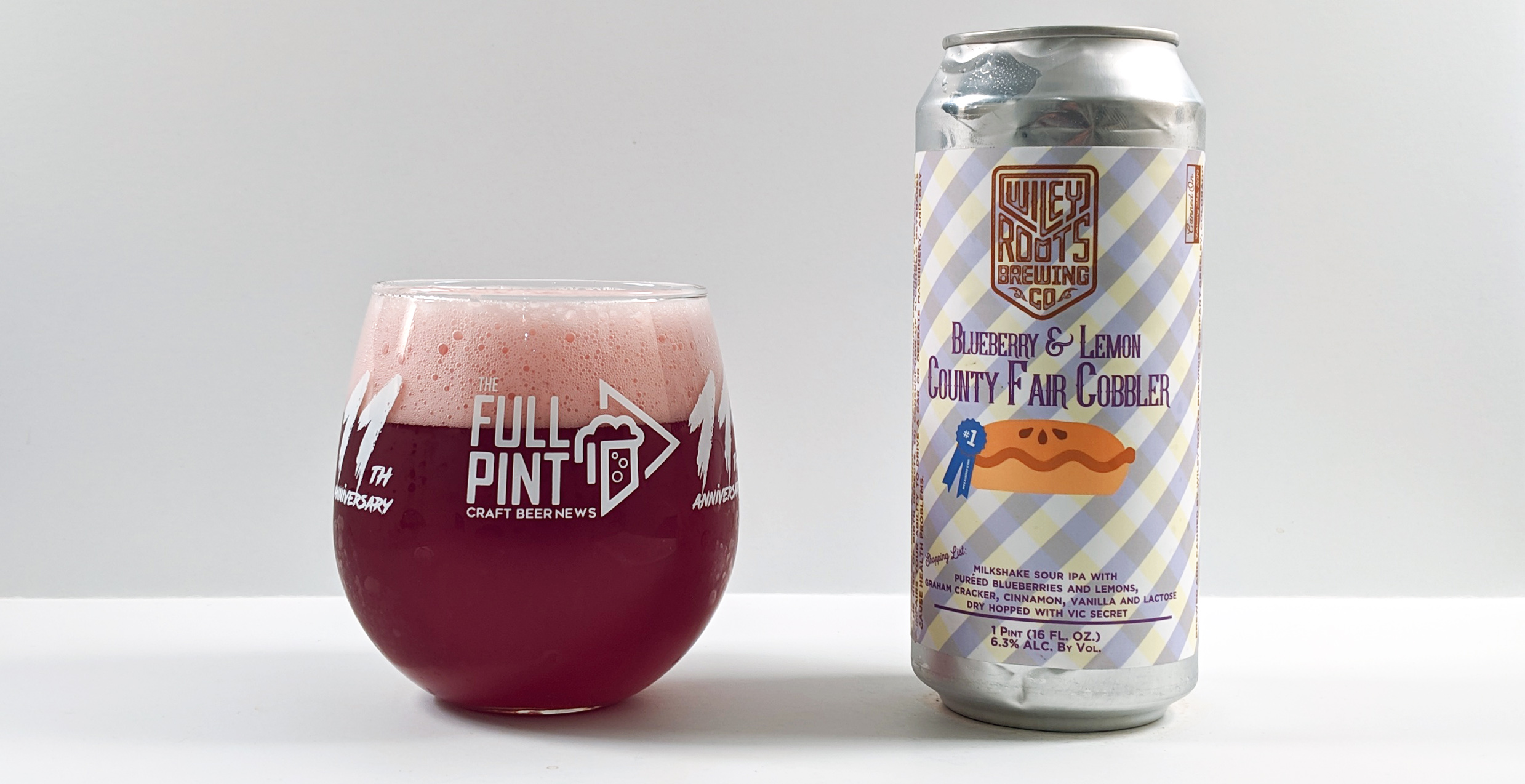 I was first introduced to Wiley Roots last year and had the privilege to try several of their beers including those from their Slush Series of kettle sours. As if those beers weren’t crazy enough, Wiley Roots has built upon these fruited kettle sour experiments and released one of the craziest sounding beers I’ve ever heard: Milkshake Sour IPA with puréed Blueberries and Lemons, Graham Cracker, Cinnamon, Vanilla, and Lactose dry hopped with Vic Secret. And this is just one of many. There are several other County Fair Cobbler beers with flavors like peaches & cream, cranberry & raspberry, and Key lime.

I was extremely skeptical of this beer at first. Rearrange the first two words of the description and you get “Sour Milkshake.” No thanks. Though I have to admit, the only other fruited sour IPA I’ve tried is Sixpoint’s Party Piñata, which I thoroughly enjoyed.

I’m sampling this from a 16oz can with a paper label and few dents from its journey from Colorado. There’s no packaging date that I can see on the bottom of the can, but upon closer inspection a packaging date of Feb 28th 2019 is found integrated into the label artwork itself and not printed on by a machine. Into my glass, County Fair Cobbler, or “CFC” as I will call it from here on, is inky purple in color and generates an outrageous looking head of purple foam. Head retention is much stronger than expected for a kettle sour as this combines both IPA and sour ale characteristics.

CFC bursts forth with an outstanding aroma of freshly zested Key limes and muddled blackberries and blueberries. It’s difficult to describe in words, but the intensity of the fruit here is far beyond what I usually experience with craft beer. It really does smell like someone is pulverizing fresh fruit in front of your face. At first, I don’t pick up any of the vanilla, graham cracker, or cinnamon. But as it warms up, there is a bit more of that pie crust character coming through. Still, I think it focuses all attention on the blueberry and lemon.

Digging in, CFC is mind-blowingly delicious. Wildly intense fruit dominates the flavor with exceptional balance between sugar, acid, and bitterness. Where CFC shines is that this beer doesn’t just have a fruit juice character but also incorporates all the wonderful leathery tannins from the fruit skins and peels. Those flavors from the puréed fruit, especially the lemons, give the beer an ethereal quality when combined with some hop bitterness. The end result is far more delicious than I could have ever imagined. It reminds me a bit of a dry-hopped sour like New Belgium’s Le Terroir only dripping with inky berry juices.

I’m still not getting too much in terms of a baked dessert character from the beer as the intense lemon peel brightens it up so much. What does happen is that the lactose adds some much-needed sweetness to balance this beer out perfectly. Overall acidity is extremely muted to around a 3 out of 10 while bitterness is powerful at a 6/10 combining fruit skin tannins with hop oils. Sweetness is mostly in the background peaking at a 3/10.

At first, I had no idea what to expect from this beer. Just by reading the description I was ready to send this one down the drain. Boy was I wrong. This is one of the most imaginative and original beers I’ve had in a long time.

Calling it a “Milkshake Sour IPA” would not be my first choice, though. In reality, this fruit version of the County Fair Cobbler series has nothing to do with IPA (milkshake, sour, or otherwise) or a dessert beer and everything to do with a fruited kettle sour. It just so happens to have some bolstered bitterness and added sweetness, which pushes this into masterpiece territory.