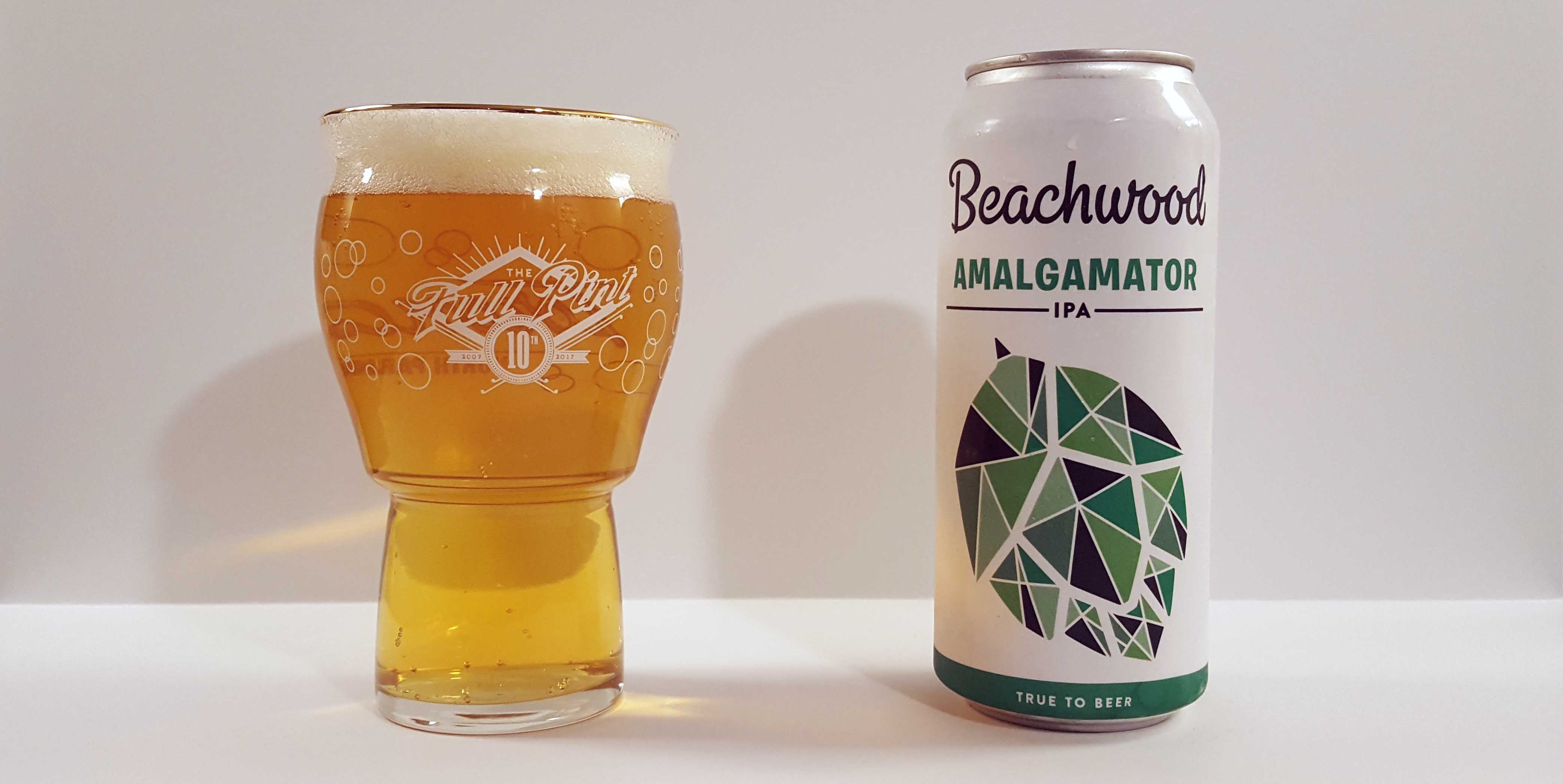 Beachwood has recently begun canning three of their IPAs (Melrose, Citraholic, and Amalgamator), which can be found on store shelves in Southern California. They compete in the toughest segment in the toughest craft beer market in the U.S. Today we are going to see how Amalgamator, arguably Beachwood’s flagship beer at this point, stands up to the competition.

This debuted on draft in 2013 and a year later was released in bombers, which is not the best format for a regular drinking beer like a normal strength IPA. In 2017, Amalgamator hit store shelves in 6-packs of 12oz bottles – a big improvement. That change is probably thanks to Beachwood’s expansion to a larger brewhouse in Huntington Beach, CA. And starting this year, these IPAs are now available in 4-packs of 16oz cans like you find with Modern Times. The pricing is on the higher end of the spectrum at $14 for a 4-pack. (Pizza Port Swami’s, for instance, is $13 for a 6-pack of 16oz cans – the best value in the segment right now).

I’m reviewing Amalgamator from a 4-pack of 16oz cans packaged on 3/27/18. I sampled the first can 72-hours after packaging and the final one three weeks later. (I had nothing noticeably different in my notes across this time period.) I need to mention that even though these cans are packaged with PakTech plastic toppers that protect the entire top of the can from debris, each one of my Amalgamator cans had significant dirt and debris in the top lip of the can signaling that something is happening in between canning and putting on the PakTech plastic holder. I thought maybe this was a one-time incident, but it happened with a second 4-pack of Beachwood beer I purchased as well. It could be a distributor issue, though, as I did buy them from the same retail location. Some breweries like Firestone Walker have opted for paper cartons for their cans that do not have a perforation in the center to use as a handle. Though it makes the beer a bit annoying to carry home from the store, this is probably the best way to ensure no debris gets on the top of the can lids.

After some rinsing in the sink, the can is ready to go. Into the glass, Amalgamator is crystal clear golden in color with a smaller than expected head of off-white, large-bubbled foam that recedes too quickly for the style. This has not been my experience with this beer in the past, so I will chalk it up to the canned version itself requiring some tweaking perhaps.

The aroma begins with butterscotch toffee and fresh bread juxtaposed with thick, late-addition, resinous hops. For those who read my review on Cigar City’s Jai Alai IPA, that beer is explosive in the aroma with bright citrus hops. Here, there is significantly more base beer showing through that isn’t unusual for West Coast IPA. It reminds me of Pizza Port Swami’s, Port Brewing Wipeout, and even the original special release Sculpin.

That interplay manifests in the flavor as well. On the maltier side, you get pound cake, toffee, caramel, and Hawaiian rolls. This creates a dense, carby, meal-in-a-glass base beer with a soft and silky mouthfeel that is just a joy to drink. On the bitterness end, substantial white grapefruit juice cuts through the sugar and carbs, but the focus is on late-addition hops so the actual bitterness on the palate isn’t too intense. I would place it at a 7 on a 10-point scale while sweetness is similar at a 6 or 7. The mouthfeel is on par with the best hoppy beers I’ve tried such as The Hop Concept’s Dank & Sticky, but Amalgamator accomplishes this with lower ABV (7.1 vs 8.5%).

Light acidity builds in the back of the palate after each sip, which creates a lingering acidity rather than lingering bitterness over time like many IPAs. Along with a wet sourdough flavor, you get white grapefruit plus kumquat, pineapple, and even touches of peach. It’s an amazing experience with oily, resinous hops taking over as you spend time with the beer. But the main takeaway is that this is soft. The mouthfeel is so silky and just glides across the palate. Bitterness is higher but never sharp or biting. Amalgamator represents all the best characteristics of West Coast IPA.

I still put Pizza Port Swami’s as my gold standard for IPA, just because of the quality, price, format, and distribution. Beachwood’s IPAs are pricier, come in 4-packs vs 6-packs, and are more difficult to find. With that said, I give the edge to Amalgamator for being a bit more refreshing and showcasing more silkiness and yellow fruitiness. The truth is, for the past four years, Amalgamator has held the spot as my favorite IPA in existence. This is the best IPA money can buy.

Please use the comment section below for general comments about this beer and/or my review. If you would like to see a specific beer reviewed or have general comments on reviews, please email info(at)thefullpint.com. For more information on how we review beer, please read here.