Official description: [From bottle] Lively aromas. Twisted roots. Just tapped. We asked our brewers to go nuts, and instead, they went all botanicals on us. [From website] Tap into our pilot brewery with this lively amalgamation of juniper and hops flowing through a blossoming blend of herbs, citrus, and botanicals. Malt: Pilsner, Rye. Hops: Cascade. 7% ABV, 15 IBUs. 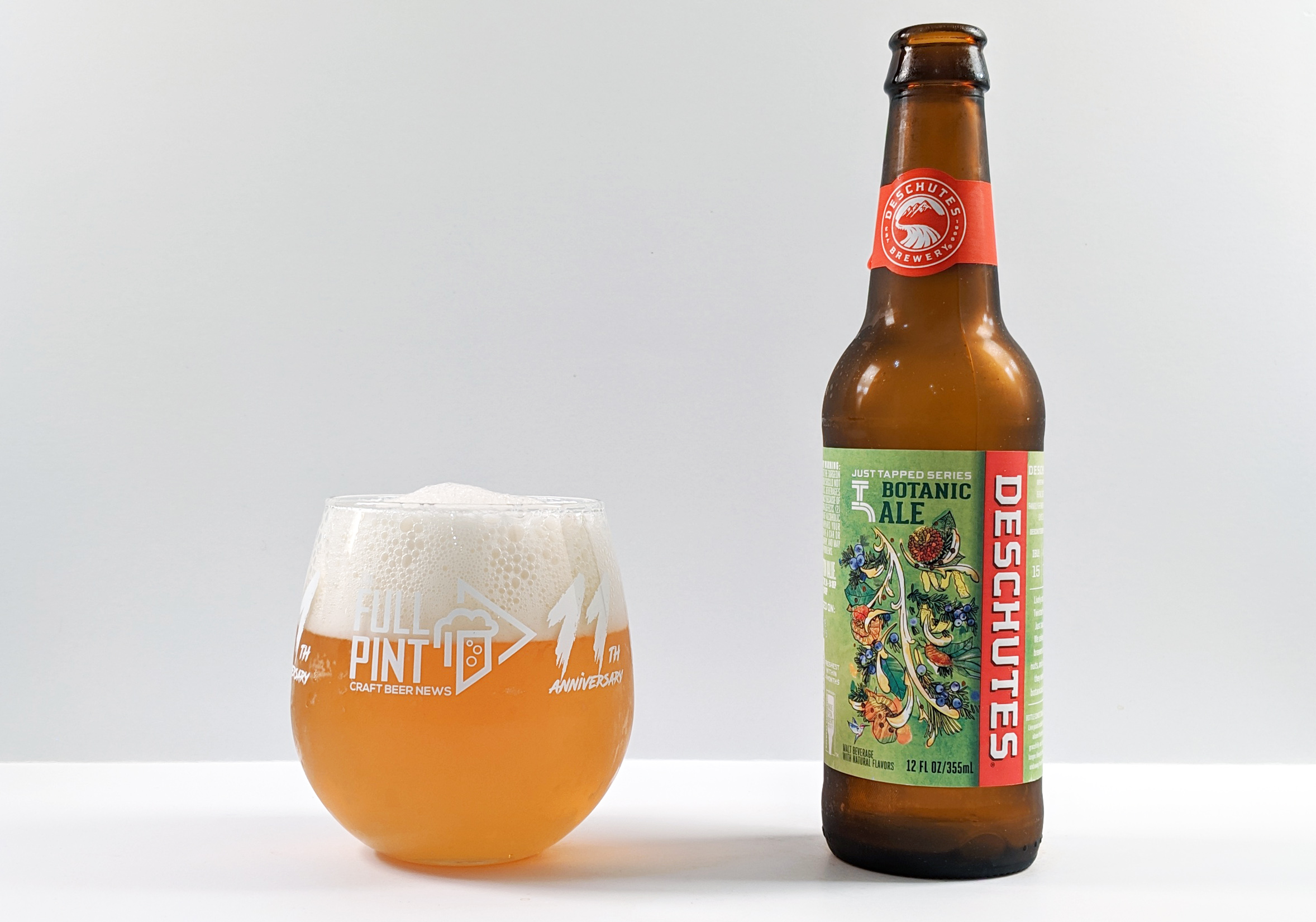 Disclaimer: I love botanical beers. A side effect of trying so many beers is that weird beers like these stand out. Botanical beers like gruit are rare in the craft beer world, but Oregon brewers excel at them. Upright, De Garde, and Ale Apothecary, to name a few, make some of the best botanical beers I’ve tried, some of which incorporate aging the beer in gin barrels. However, they are mostly special releases in 750ml bottles and are both pricey and difficult to find. Can Deschutes offer up something of similar caliber but distributed widely in retail outlets? Let’s find out.

I should note that Botanic Ale is not necessarily new as it has been a brewpub favorite since at least 2013. It has gone through several recipe tweaks, but today’s version is the first to be bottled and distributed. It joins Deschutes’ Just Tapped Series, which takes brewpub favorites like their Baltic Porter and brings them into wider distribution. Botanic Ale also joins Deschutes’ mixed pack of seasonals for this year.

In terms of what is actually in this beer besides pilsner malt, rye, and Cascade hops remains a mystery. I found various conflicting sources. For instance, the brewpub version has “juniper, black peppercorn, coriander, lemongrass, and orris root” according to the Deschutes website. However, this bottled version supposedly has juniper, yarrow root, and dandelions, though I cannot find an official print source. Because the current description mentions “herbs, citrus, and botanicals,” it is possible that Ratebeer’s description, which includes Persian lime, has some credibility too. In other words, no one seems to know what we’re drinking.

I’m sampling this from a 12oz bottle with a packaging date of 3/26/19 found on the center-left side of the label. Into my glass, Botanic Ale is crystal clear golden in color with no haziness or sediment to speak of despite being bottle conditioned with live yeast according to the label. Head formation is incredible with a thick topping of buttermilk foam that sports a glossy sheen and fat bubbles.

The aroma is immediately impressive with a huge dose of zesty lime coupled with a medley of herbs and spices that is difficult to narrow down. Juniper and lavender come to mind as do dried flowers and potpourri. Thankfully, it isn’t too chemical or perfumey. It’s simply intriguing.

Flavor-wise, Botanic Ale is firmly rooted in a sweeter, familiar blonde ale base beer that sports honey bread rolls and minimal hop bitterness. Layered on top is a bright citrus addition (Persian lime?) along with juniper and lavender to match the nose. The mouthfeel remains thicker than expected thanks to the sweeter blonde ale base.

Overall sweetness is at 6/10 while bitterness is at a paltry 2/10. Acidity is surprisingly a 2/10 perhaps due to a gratuitous citrus addition. I’m a huge sucker for botanical beers so was hoping for a major punch of herbs and spices. Instead, Botanic Ale is milder allowing you to appreciate the base beer and lime acidity with minimal distractions. However, I would like to see boosted bitterness here with a more robust juniper flavor, but that could alienate casual drinkers as it may push the beer to soapy or chemical levels.

Botanic Ale is a solid entry beer into the world of spiced/herbed ales with a familiar blonde ale base and moderate herbal character. The citrus addition tends to overpower both the nose and flavor, so it drowns out some of the unusual plant additions. On the plus side, it brightens up the beer to something suitable for summer. The higher 7% ABV seems at odds with its overall mission, but it doesn’t distract in my opinion. Overall, I enjoyed it but think it could continue to evolve as it has at the brewpub. In terms of a botanic beer you can find on store shelves, Deschutes may be the only one to offer such a beer to a wider audience. If you seek this out and love it, try some of the beers I mentioned in the introduction such as Upright’s Special Herbs or Ale Apothecary’s Sahati.