Product description: Truck Trail is named for the Anderson Truck Trail in Alpine, CA and is a tribute to rural American back roads where locals go for off-roading and other shenanigans. This American Pale Ale features a balanced blend of Cascade and Centennial hops. It pours a golden yellow with an eggshell colored beer foam and its bold hop-bitterness is perfectly balanced by a mellow, malty sweetness. Dominant notes of fresh pine needles and zesty citrus rind make this a classic example of the style. 5.5% ABV, 31 IBUs. 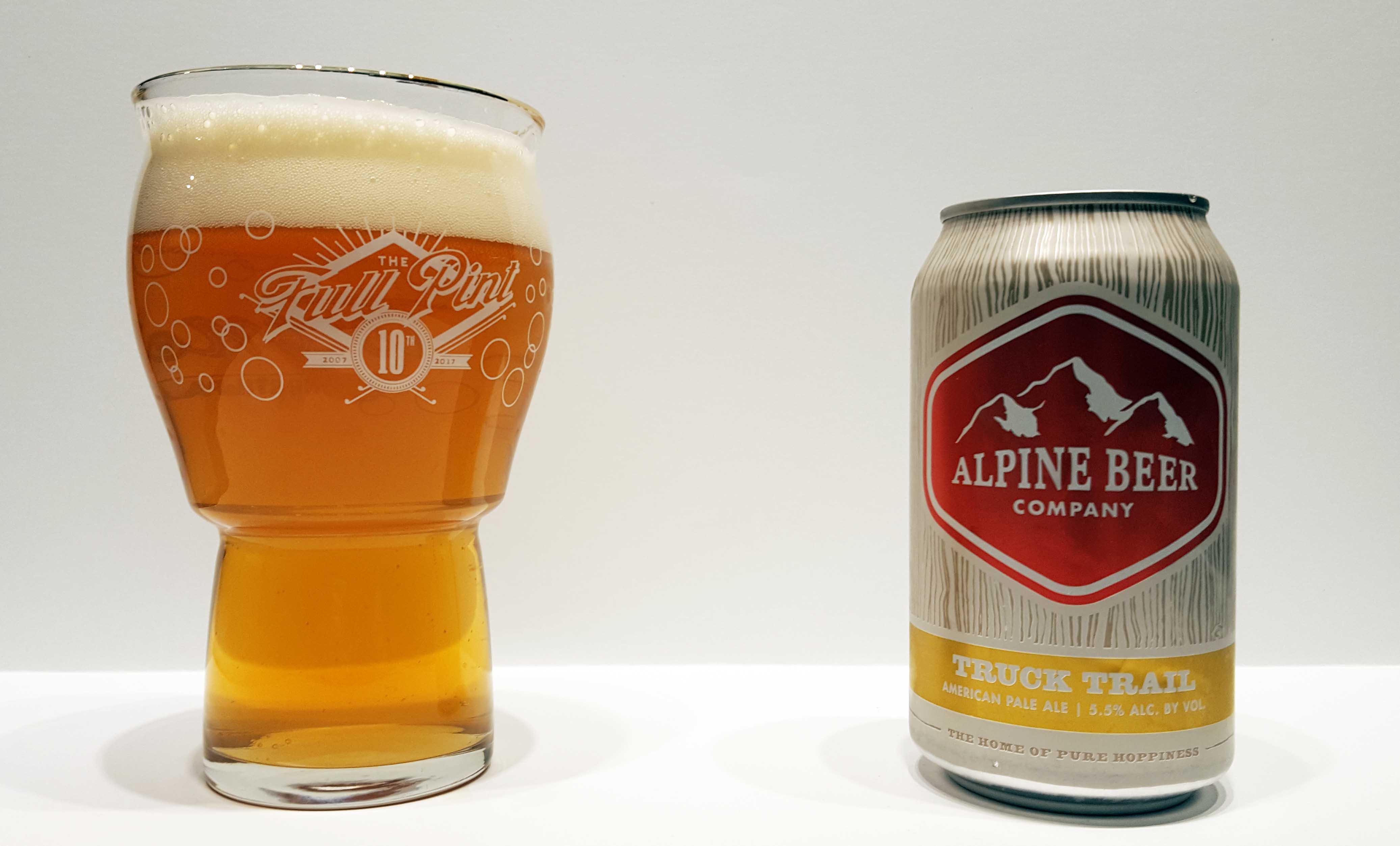 I sampled this from a 12oz can with no obvious canning date to be found. Of course, you can decipher the canning date if you know how Green Flash/Alpine codes their bottles, and you’re willing to do a bit of math. You can read about the deciphering in the introduction to my reviews of both Green Flash Remix IPA and Green Flash Sea to Sea Lager.

Into the glass, Truck Trail is clear, deep golden to light amber in color with healthy off-white foam that sticks around for several minutes. The aroma begins with fresh bread and sweetened lemon tea – the latter being the exact aroma that takes over Green Flash Remix IPA, which is produced in the same facility.

The flavor continues with sweetened lemon iced tea with building red grapefruit bitterness that peaks at a 7 out of 10 intensity – hitting harder than 31 IBUs would suggest. Sugar is also prevalent at a 6 out of 10 giving the beer a heavy, chewy body for this style similar to Sierra Nevada Pale Ale or Oskar Blues Dale’s Pale Ale. It’s more bitter and dense than most IPAs, to be honest. However, it doesn’t get bogged down in caramel and dark orange flavors like those two opting for lemon verbena and tangerine. It’s drinkable, approachable, and fairly refreshing with a familiar combination of flavors. Just a touch of celery here and there keeps it from being perfect.

Though many consumers I bet will pass on Truck Trail in favor of Hoppy Birthday, a beer that puzzlingly overlaps completely in style and ABV, the truth is that I tried these back to back and Truck Trail was better. Hoppy Birthday, though phenomenal as an Alpine brewpub beer, has little resemblance to that in the scaled Green Flash version. Like I mentioned in my review of Green Flash Remix, Truck Trail continues the theme of Green Flash’s conservative core lineup. These offerings are very “safe” and don’t push the envelope or explore new territory. Truck Trail is technically good but unoriginal. Of course, Truck Trail isn’t literally a part of Green Flash’s lineup, but this is, to my knowledge, the first beer brewed under the Alpine brand that is not taken from an Alpine brewpub original recipe. In other words, this is a Green Flash creation. Truck Trail debuted at the very end of 2016/beginning of 2017 and went straight into cans. And that’s a whole other problem. Green Flash decided to can Truck Trail and Willy Wheat, two beers with little to no following, and keep beers that we love like Nelson, Duet, and Pure Hoppiness in bottles. It doesn’t make any sense to me.

Though I still think this beer is solid, I believe on a more macro level that there is a collective yawn over the APA segment altogether. Stone and Bell’s have been struggling with their APAs going through revamps to modernize them and keep them relevant. Other breweries have left old recipes to rot or have discontinued their pale ales completely like Firestone Walker Pale 31. The only beers in this segment that I’ve raved about recently were El Segundo’s Citra Pale, which doesn’t see distribution outside of Southern California, and pFriem’s Mosaic Pale Ale, which is available only in the Pacific Northwest. The problem is that casual consumers really understand just three words when it comes to beer: light, dark, and IPA. The latter has become the adjective for any beer that is bitter. So make a bitter pale beer and call it anything other than an IPA, and it doesn’t make sense to buyers. APAs must be marketed as Session IPAs. Pilsners must be marketed as India Pale Lagers. These two styles are what we need to see in the market. No one needs another 7.5% IPA. Truck Trail is on the right path, but some recipe tweaking is still needed.