Product description: Back in the day, our brewers rocked the party, building a craft beer legacy that is the stuff of legend. For Remix IPA, we’re kickin’ it old school, using a mash-up of our favorite classic hops and fresh techniques. Remastering the hops that started it all. Cascade, Columbus, and Summit offer a bold aroma with bright riffs of dank pine and citrus balanced by soft malts. This solid gold hit is a crisp crowd-pleaser. 6.2% ABV, 47 IBUs. 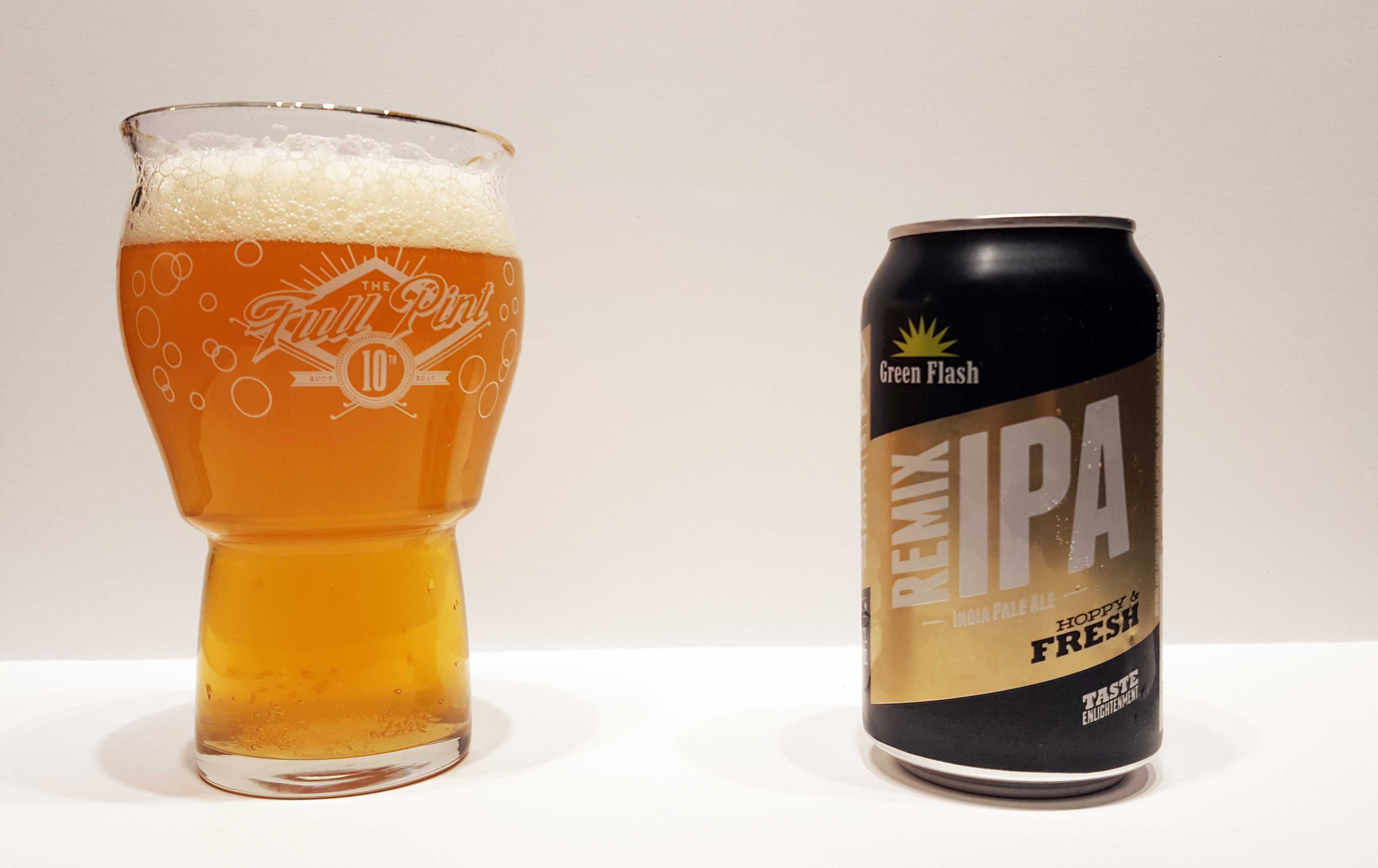 UPDATE: I’ve edited this post to reflect that Green Flash does indeed date their beers, but in a Julian code that requires prior knowledge to decipher. From Green Flash: Born On dates are written like this: “8123 1 1234.” The first four digits are the day it was packaged. The first is for the year: 7 represents 2017, 8 represents 2018. The next three digits are the day of the year: 001 being January 1st, 365 being December 31st. The solo number depicts which facility it was produced at: 1 is San Diego, 2 is Virginia Beach. The final 4 digits are the time it was packaged, written in military time.

Remix IPA is new for 2018 and joins the Green Flash core lineup. Along with their iconic West Coast IPA (actually a Double IPA), the core lineup includes Soul Style IPA (a more tropical take with Citra, Simcoe, and Cascade), Passion Fruit Kicker (a fruited wheat ale), and Sea to Sea Lager (a German Zwickel). It’s a diverse group, so let’s see how Remix fits in.

I sampled this from a 12 oz can with a Julian code packaging date. See above for how to decipher the code. Into the glass, Remix is deep gold in color with big initial foam but poor head retention for the style. The bubbles are large and fleeting, so you miss out on the quintessential micro-bubbled, rocky foam that is a hallmark of the style. There’s a little bit of turbidity/chill haze that clears up as it warms.

The aroma starts out with cantaloupe, honeydew melon, and starfruit. But as it warms up, all I get is sweet tea. The flavor matches with sweet cantaloupe and golden honeydew melon. Again, the more I drink it the more I think sweet tea, specifically Southern-style lemon iced tea. It’s still very good – both refreshing and richly-bodied with background maltiness/sugar giving it enough balance to match the more aggressive bittering hops like Columbus and Summit. But even then, this beer is nicely restrained for a Green Flash beer. What I expected would be a huge wallop of Summit driven oniony sharpness ends up being middle of the road bitterness. I would say sweetness is a 7 out of 10 while bitterness is a 6 out of 10. It’s way more drinkable than I expected.

Perhaps this brings back some old school hops, but the mouthfeel and balance are nicely modern. Some enthusiasts may be disappointed that Remix isn’t this aggressively bitter beer, but the flipside is that this appeals to a wider craft beer audience and is sure to develop some fans. I’m still not sure if this deserves a spot in their core lineup, but it does offer a significantly different flavor profile to Soul Style and West Coast IPA. While other breweries are capitalizing on hazy and tropical IPAs, Green Flash is introducing this lemon iced tea beer. Sure, Soul Style is billed as tropical, but adding in Citra hops to a very normal IPA recipe doesn’t quite cut it anymore.

In the introduction, I said that Green Flash’s core lineup was diverse, and it is on paper. But if you try these beers, what sticks out to me is how “safe” this lineup has become. There’s nothing cutting edge or even close to experimental. Other breweries like Stone and even Coronado have come out with some incredible all-new beers this year that make the Green Flash lineup seem outdated. Now with Remix, the outdated moniker seems to be officially adopted.