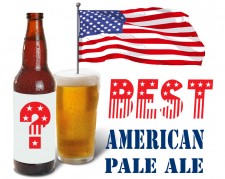 One of the tastiest, easiest to drink styles of beer is the American Pale Ale. Not quite as strong as a full fledged IPA, this style of beer showcases the American hop, while maintaining warm weather time drinkability.

We’d like your input in selecting the Best American Pale Ale. We’ve nominated 20 highly regarded APAs to choose from, however you are also able to write in a vote in the comment section below.  Voting ends May 16, 2013 at 5PM PDT. Here are a few guide lines for the poll, to ensure a level of fairness and fun.