Official description: [From bottle] Some of the most famous and notorious defenestrations occurred in Prague in the 15th and 17th centuries. These defenestrations were done in an effort to remove government officials by throwing out a third story window. The result was either sudden death or serious bodily injury. Either way, mission accomplished! In the spirit of the 2020 election, we hope you enjoy our hoppy Belgian-inspired blonde ale named for the act of removing politicians by throwing out the window- literally! 6.5% ABV 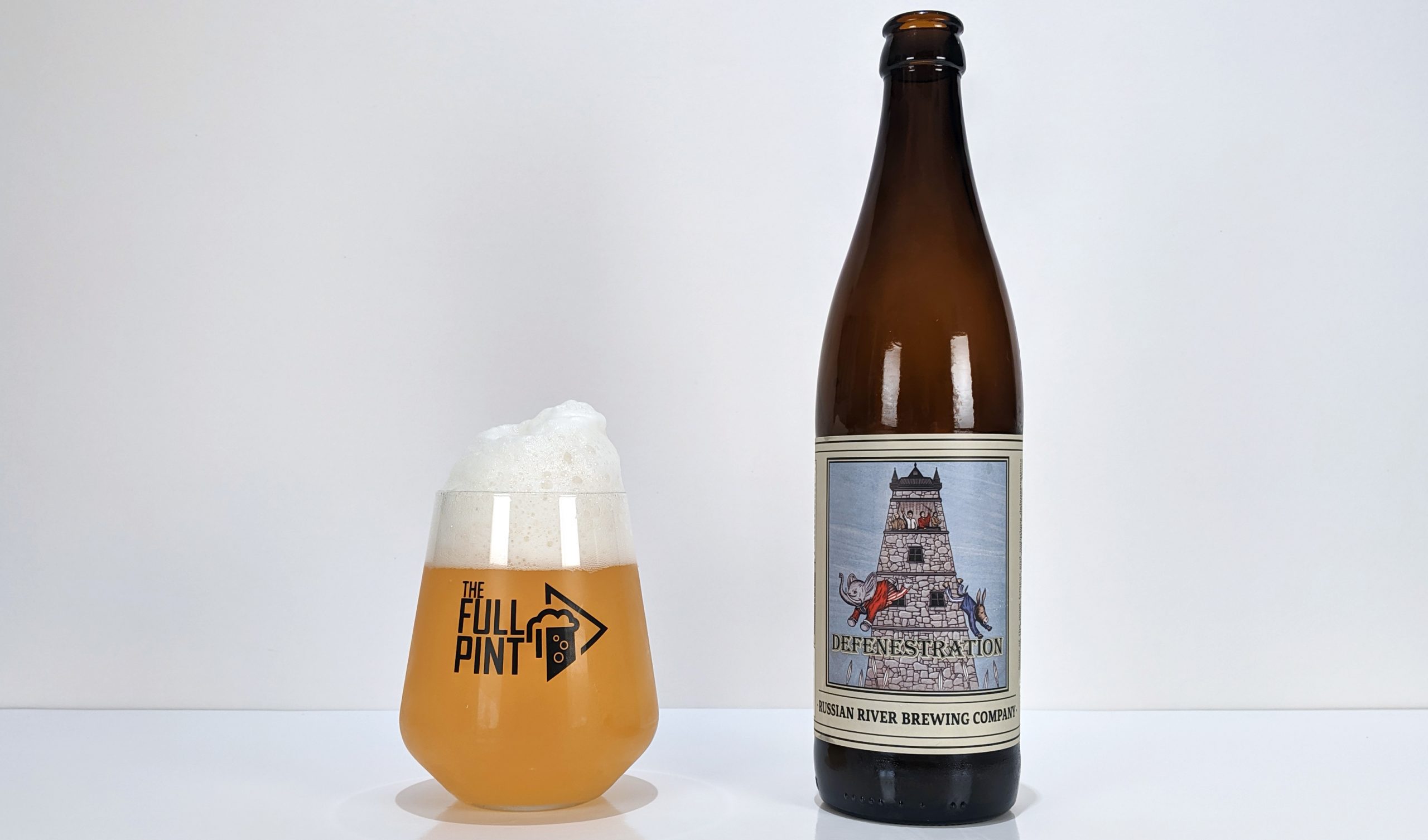 2019 has been an amazing year for Russian River fans. With their new expansion in Windsor, CA; output has increased dramatically and fresh bottles of long-time favorites Blind Pig and Pliny the Elder are popping up more frequently on store shelves. Several “new” beers were bottled this year for the first time such as Intinction with Sauvignon Blanc grapes, Velvet Glow, and Happy Hops. And we should be thankful that they were spared in this year’s wildfires whereas many communities nearby were not so lucky.

Defenestration is not a new beer as it debuted on tap in 2008. It then debuted in bottles for the 2016 election year. In the first bottling run, “Belgian-Style Blonde Ale” was printed clearly on the bottom center of the label. For this late 2019 release, the style is omitted from the front label. If you read through the description on the side of the label, eventually you get “hoppy Belgian-inspired blonde ale.” That more or less matches up with Russian River’s webpage for the beer, which describes the beer as having no particular style with the header “Hoppy Blonde Ale.” However, there’s a second webpage for this beer that is quite different. This page describes Defenestration as a Brett IPA that uses Norwegian Kveik yeast, a fast-acting, high temperature loving yeast strain. It is then bottle conditioned with Saccharomyces and Brettanomyces. It also gives a full hop bill: Warrior, Brewers Gold, Sterling, Amarillo, and Celeia. On November 2nd of this year, Russian River posted a photo of its taplist, which also describes Defenestration as a Brett IPA.

I’m sampling Defenestration from a 510ml bottle that I picked up for $6.50 plus tax. The bottling date, like other RR beers, is found easily in the bottom left corner of the front label in raised type. Mine is from 7/12/19, placing it at over three months old at the time of review. I double-checked with the bottle shop to make sure this batch was indeed a brand-new arrival given the age. They confirmed, citing that this beer probably takes a while to bottle condition with Brett and Saccharomyces – an important tidbit pulled perhaps from the brewery’s second web entry.

Into my glass, Defenestration is a glowing orange-gold color with medium haziness. It produces a colossal-size head of foam generated by both powerful carbonation and gratuitous hop oils in suspension. (Hoppy Brett saisons yield similar results from my experience.) A tower of cumulus foam rises several inches over the edges of the glass without spilling over. Head retention is near permanent – destroyed only by me plowing my face into it. At the bottom of the bottle is a fine layer of silty sediment that will add some unappealing chunks to your glass if added. It’s safe to say this beer uses some unusual yeast strains with Brett being a strong contender.

Intense potpourri and spicy hops dominate the nose. Sit with it for a few minutes and you’re rewarded with vanilla cake, zesty pomelo, sweet Valencia oranges, and fresh ozone like the air before a rainstorm. There’s hardly any funkiness to the aroma that I can detect. Rather, any Brett character blends nicely with the saison-like primary yeast (Kviek seems likely) for a peppery, earthy note.

Flavor-wise, Defenestration dangerously pairs intense bitterness with intense dryness – usually a lethal combination. But somehow Russian River pulls it off with aplomb. Roaring carbonation gives the beer a floating, effervescent mouthfeel. Though its lack of sugar accentuates overall bitterness, it doesn’t go overboard. Intense kumquat, pear skins, and white peppercorn combine for a unique sensory experience. For a split second, you get some expected astringency around the edges, but it mellows out smoothly. Strong mineral flavors like calcium and limestone join in as well. In the end, Defenestration comes off as a “refreshing hop bomb”, an oxymoron I suppose that describes some of my favorite saisons and Belgian blonde ales. 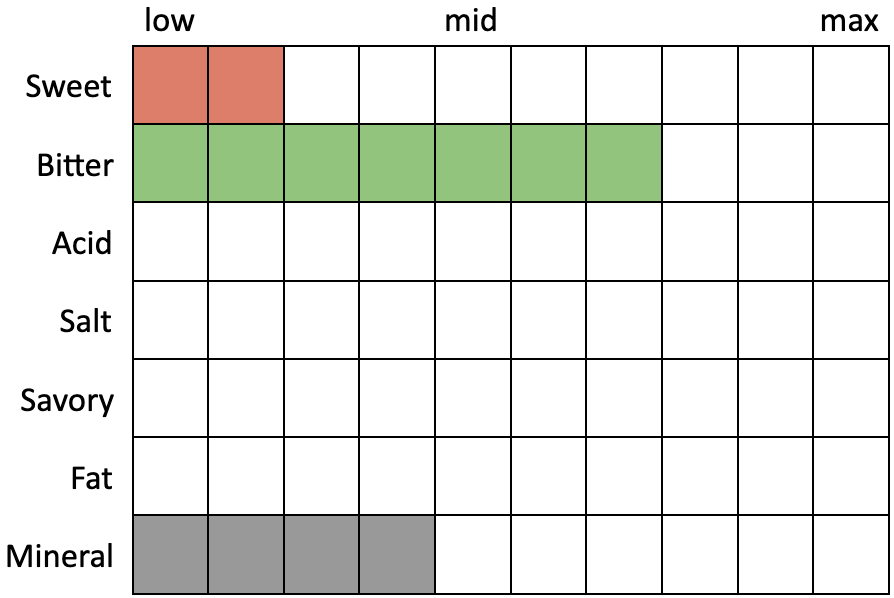 Like several other Russian River beers, the use of nebulous beer styles on the labels has its pros and cons. It helps to temper expectations while keeping you guessing what’s inside – a fun surprise I’m sure for some drinkers. But for the high price tag, it would be nice to know exactly what you’re getting into. Defenestration certainly lives up to the “hoppy Belgian-style blonde ale” description on the bottle, but you’re still left guessing about the Brett and Kveik inclusion. If they are part of the recipe, which I think they are, both are well integrated and don’t overwhelm the beer with any farmhouse-like funkiness. Still, Defenestration is an unusual beer that may be love it or hate it for some drinkers. The combination of intense bitterness with intense dryness produces some astringency, which peeks through just a bit. But that lack of sugar plus high carbonation produces a refreshing beer in the end that stacks up with some of the all-time greats like Brasserie de la Senne’s Taras Boulba.