From a scientific standpoint, draft beer is better than packaged beer. It has less chance of oxygen exposure, keeps light out, and tends to be distributed faster. 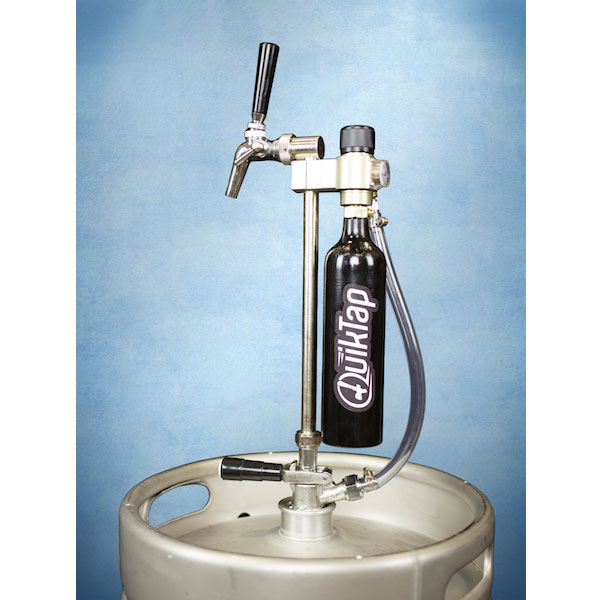 To put it simply, properly maintained draft beer tastes better. And if the taste benefits aren’t enough, keg beer is often half the price per ounce. Plus, having a keg is just more fun.

After choosing the keg you want, your next decision is how to serve it. If you’re like most people, you’ll have to go with a portable tap system.

No doubt everyone is familiar with the pump tap. Unfortunately, the second you tap the keg your beer begins to go flat and starts to spoil. It only takes a few hours for the beer to taste terrible.

The next better option is the classic jockey box setup. But this system is expensive and a huge hassle to deal with. First you have to lug around a ton of heavy equipment and tools. Then you’ll spend the next hour fumbling around with tangled hoses. Odds are you’ll have a leak so you better have spare parts and tools to fix it. Next you’ll waste a half gallon of foam until you’re finally ready to serve.

After all of that, you have the pleasure of cleaning 100 feet of beer coil. Don’t forget to clean out the cooler immediately or else you’ll be growing the world’s largest culture of foul-smelling mold and bacteria.

The good news is that draft beer just got a whole lot easier, thanks to the new QuikTap portable Co2 tap. QuikTap was designed by pro brewers to combine all the benefits of a Co2 draft system into a convenient, handheld package. You can find more information and purchase your own tap at: www.quiktap.com

QuikTap is fitted with an adjustable regulator and refillable Co2 tank attached directly to the tap. The whole system weighs less than a six-pack and sets up in seconds. The all stainless flow-control faucet lets you dial in the perfect pour almost immediately with no waste.

Best of all, you can tap and untap your keg whenever you want while preserving the beer at the same time. If you don’t finish your keg, just remove the QuikTap, give it a quick rinse, and tap it again later on. It’s so easy to use you can operate it with one hand. When you’re all finished it cleans up just as easily.

The QuikTap was designed for commercial use in portable bar setups, beer festivals, and special events. Since launch in September of 2015, some of the biggest names in craft beer are now sporting their new QuikTaps.

As a thank you to TheFullPint crew, you can now get $30 off either version at www.quiktap.com using the exclusive coupon code: TFP2016