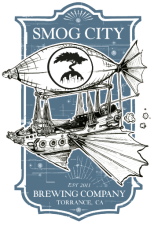 Torrance, CA – It’s that time of year again… and Smog City Brewing is working hard wrapping our brains around the anticipated turnout for our anniversary event on May 9th. It’s going to be a great day and we’re doing our best to ensure EVERYONE has a blast.

No tickets or reservations are necessary to attend this portion of our festivities!!

Some highlights for the day!

Steamfunk Brett IPA – Our Anniversary beer will be available at both the front back and the Brewer’s Bar. Bottles will be for sale for $10 and case discounts as well! case of 12 / $100 (tax included)

Beer Cocktail!! Bourbon O.E. will be pouring at the Brewer’s Bar where Jason will be serving up Old Fashioned O.E., a beer cocktail with orange and bitters! Warning: There many be bar style pyrotechnics involved…

We’ll be debuting two new Sour Beers that will be on tap in limited quantities: Cuddlebug, our Peach Sour and a Sour Brown (Name TBD)

We will have THREE bars set up throughout the brewery.

One last note of motherly concern: PLEASE be sure to consider how you will get home from the event. Uber, taxi and friends and family are great options! It’s true; we like you and we really care. So drink responsibly and get home safely!

See you Saturday, May 9th for a celebration of another year of beer!

Cheers!
Laurie and Porter and the Smog City Team