Like all good things, the Great American Beer Festival has come to end, and for some people in the craft beer industry battling a week-long hangover, it’s not a moment too soon. But there was something different about this year’s fest. From the new layout to the downsized booths, the 2017 GABF had a scaled back look lacking its usual drama. But this year’s fest wasn’t without a little drama. Long security lines had both attendees and brewers frustrated this year and quite whispers about breweries who can no longer carry the Brewers Association’s seal of independence could be heard through the steady roar of noise inside of the Colorado Convention Center. But perhaps one of the biggest changes this year was an overhaul of the awards ceremony. From the location, to the stuffy vibe felt by those who made it inside, Saturday morning had a rocky start. 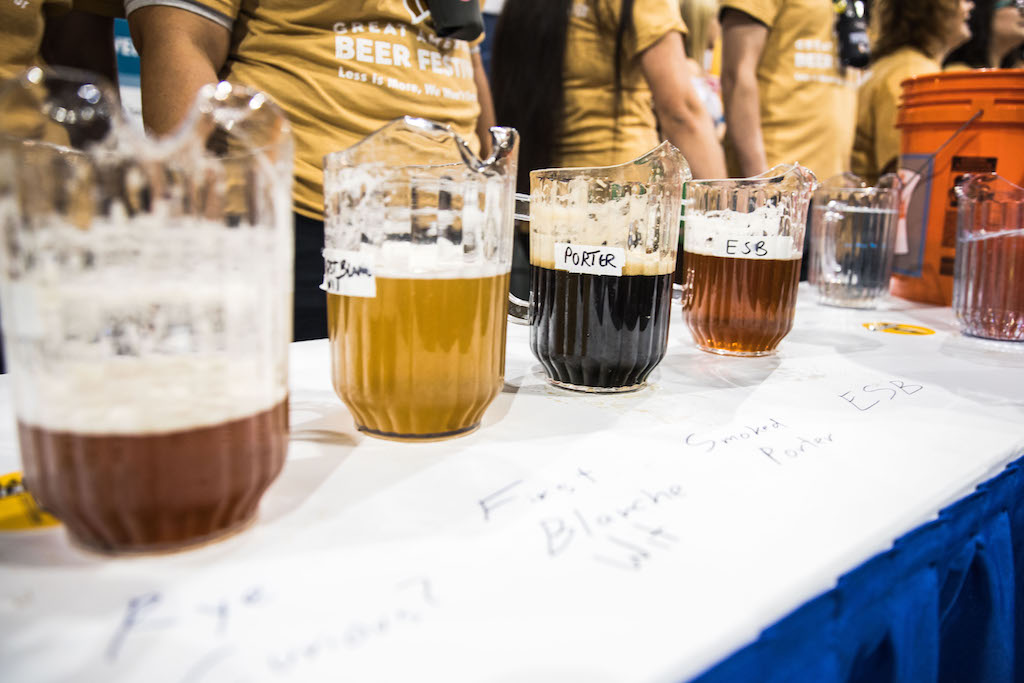 9:15 am: Big security lines begin to form as the groggy crowd of nervous industry members pass through the upgraded security measures the festival took on this year.

9:30 am: Hundreds of rugged-looking industry folks refueled with burritos and coffee outside of the Mile High Ballroom in the Colorado Convention Center — a festival tradition and motivation for brewers to get up before noon on the final day of the fest. The venue change (the awards ceremony is typically held in the Bellco Theater) proved to be a major problem for the Brewers Association. According to a watchful fire marshall, the room filled to capacity before 10 am, leaving a good chunk of brewery representatives stuck outside, watching the awards on a big screen. Some medal-winning breweries barred from entering were unable to make to it the stage to pick up their award and get the coveted celebratory fist bump from Brewers Association and Great American Beer Festival founder, Charlie Papazian.

10:00 am: The awards kicks off with an annual “thank you” speech from longtime festival organizer, Nancy Johnson. Following her speech, Johnson passes the mic to Bob Pease, president of the BA, who after a short cheers to the brewers, launches into an odd, political introduction to Colorado Governor John Hickenlooper, who shares some memories of his time at Wynkoop Brewing Company to a seemingly confused crowd anxious to get the medal portion of the ceremony started. The vibe in the room is stiff, and it feels more like we all inadvertently signed up for a corporate training retreat instead of a beer competition.

10:10 am: The BA’s craft beer program director, Julia Herz, energetically takes the stage and enthusiastically shares some stats (and gives a plug for the organizations seal of independence) with the room. 7,923 beer entries were logged this year by 2,217 breweries in 99 different categories.

10:31 am: Figueroa Mountain Brewery picks up their first medal — a bronze in the American-Style Wheat Beer with Yeast category for their Wrangler Wheat. The brewery would go on to win two more medals, carrying on their success at the fest for a the second year in a row.

10:40 am: Monday Night Brewing from Atlanta, Georgia picks up a bronze medal in the Chocolate Beer category for Tears of My Enemies, giving the still sleepy audience a good chuckle.

11:02 am: Firestone Walker picks up a bronze medal in the German-Style Pilsener category for their Pivo Pilsener. Pivo was flowing all throughout Denver during GABF week as beer drinkers looking to pace themselves for a heavy week of beer drinking were reaching for the light, flavorful brew between sessions.

11:13 am: Colorado-based Wibby Brewing Company steals the show when brewery co-owner and co-founder, Ryan Wibby, drops to one knee while accepting a silver medal in the Munich-Style Dunkel or European-Style Dark Lager category to propose to his girlfriend.

12:20 pm: The last medal is handed out and industry people spill back into the main hall where a mellow crowd of some of the best-dressed festival goers of the weekend are kicking off the member’s only session and the second-to-last session of the festival. Unlike previous years, massive crowds didn’t immediately form in front of the medal winners from the awards ceremony. Instead, breweries like Avery Brewing Company, Bells, and Allagash sported long lines. Even though Colorado brought home 38 medals this year, and Wyoming’s Melvin Brewing brought their shenanigans to the awards stage to pick up hardware twice, the Mountain Region stayed relatively quiet following the ceremony. Instead, the Great Lakes, Mid Atlantic and Southeast regions were bustling hubs of beer drinkers looking to taste the next generation of craft beer. Rising craft beer states like Pennsylvania, Indiana and Texas came away big winners.

3 pm: I hit up the Beer Travel section of the fest. For the first time, tourism officials from some major beer regions and up-and-coming craft beer meccas set up booths inside of the fest to lure fans of craft beer into booking their next beercation in one the handful of beer destinations in the section. Although most booths seemed pretty gimmicky with spin the wheel giveaways and hooky souvenirs, this section of the festival stayed relatively busy throughout the entire festival, furthering the rise in travelers using their vacation time to visit their favorite bucket list breweries.

5 pm: The last session begins with most breweries serving up more “sorry, we’re out” sticky notes than actual beers. The craziest session of the fest brings out the “pour me whatever your highest ABV beer is,” and lots of “I’ll take the dark one.” This continues until it’s time to shut it down for the evening, and officially put the 2017 Great American Beer Festival in the books.