(Portland, OR) – Keeping with tradition, Ecliptic Brewing will host an out of this world party on October 21st equipped with special beer releases, food, and free live music to celebrate another trip around the sun. 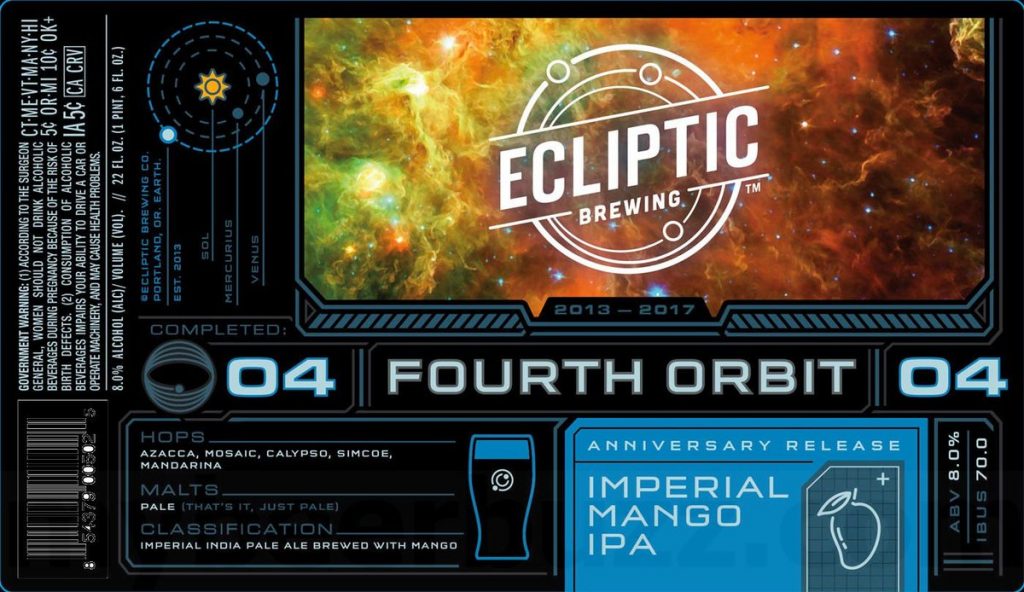 Special beer releases selected for the event will happen throughout the day. Fourth Orbit Imperial Mango IPA made to celebrate the year will be available for the first time. In addition, Bourbon Barrel-Aged Third Orbit Imperial Porter with Cherries will be released.

Ecliptic Brewing has been known for pushing the limits of creativity in brewpub food. Chef Michael Molitor and Sous chefs Aaron Medina and Christian Gruber will be serving up some tasty amuse-bouches for all attendees in the pub to sample.

Live entertainment will be happening in the brewery starting at 7:00pm. The night will start with Jeremy Wilson, followed by Bitches of the Sun. Headlining the show will be Redray Frazier, who plays a rootsy blend of rock and soul that is sure to get people grooving. The live music is free and open to all ages. Donations will be accepted at the door benefiting The Jeremy Wilson Foundation.

Ecliptic will be offering two free brewery tours at 12:00pm and 1:00pm with Owner and Brewmaster John Harris for those that would like to take part.

And of course, the party would not be complete without some stellar Fourth Orbit gear. Women’s and men’s custom Fourth Orbit concert-style t-shirts, featuring a full list of the beers brewed during Ecliptic’s fourth year, will be available for purchase.

“This year has been quite the ride,” said Owner and Brewmaster John Harris. “From installing a canning line to a busy summer in the pub, I am excited to take a minute to celebrate with you all and for you to try some tasty brews!.”

Up to date details about the Fourth Orbit Anniversary Party can be found on their Facebook event page, here.

About Ecliptic Brewing: Ecliptic Brewing is a venture from John Harris, an Oregon beer icon whose background is steeped in the state’s rich craft brewing history. The name Ecliptic unites Harris’ two passions: brewing and astronomy, and as such, the brewery celebrates the Earth’s yearly journey around the sun through both its beer and restaurant menus. Executive chef Michael Molitor rotates his seasonally inspired menu every six weeks in accordance with the old-world calendar. Harris’ signature beers include Spectra Hoppy Pilsner, Orbiter IPA, Carina Peach Sour Ale, and Capella Porter.

Ecliptic Brewing Collabs with Cloudburst Brewing on Witbier with Lemon