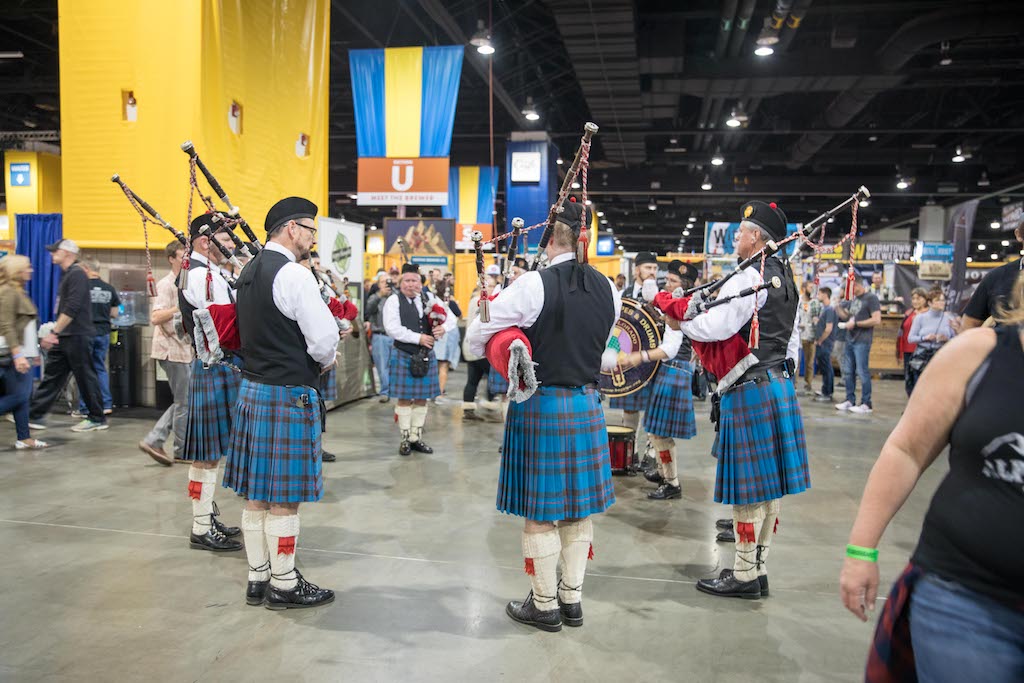 Festival-goers were greeted with blue skies and cool temps on a beautiful Colorado day. While GABF week has been raging since Monday, Thursday marks the official start of the festival, and the streets of Denver became a sea of gnarly beards and flannel, and badge-clad brewery reps trying to overcome hangovers from the night before. Couldn’t make it to the fest this year? Here’s a recap of some of the action of day one.

5:15 pm: Sounds a New Orleans-esque brass band fill the streets around the Colorado Convention Center, thanks to the dude’s at Melvin Brewing Company who serenaded GABF-goers waiting in the infamously long line to get in with tunes from an energetic band on a flatbed trailer pulled on a loop by a Melvin Sales van. The brewery also stood out in the sprawling mountain region section of the fest where they poured their notoriously big beers from a bright yellow bus blaring music.

5:20 pm: Security was tightened up at this year’s fest, and attendees were met with airport style security that included a stroll through a metal detector and pat downs of all bags. Although a lot of rumblings could be heard in the security line, most attendees didn’t argue with the new measures introduced this year.

5:30 pm: “I smell beer!” The doors open and throngs of beer drinkers make a mad dash into the fest to be the first in lines for some of their favorite breweries, like Russian River, who quickly accumulated a line that snaked back and forth into the already bustling and slightly chaotic aisle. This year’s festival layout was designed differently from last year, and didn’t seem to be met with quite as much success. In past years, some of the larger and more popular breweries could easily be found at the endcaps of each aisle, but this year, breweries seemed to scale back on the money spent on their GABF booth. Many of the big breweries who shelled out some major dollars last year for prime placement in the fest, were tough to find, and mixed in with hardly-decorated brewery booths, which often caused pile-ups of people trying to creatively find new and more efficient ways to create lines in short spaces.

5:45 pm: The bagpipers are back. In a tradition that has spanned many years, the sounds of well-dressed bag pipers marching through the main hall marks the beginning of the festival.

5:49 pm: The bagpipers stop, and genuinely look lost. I don’t blame them. There’s year’s layout is a little tricky to get accustomed to.

5:50 pm: The bagpipers find their way again, and pick up the tunes once more — which is great for me — since the loud sounds from the pipes cover up the noise of my glass dropping on the Convention Center floor — and saving me from the 30 seconds of humiliation that would have followed should anyone of busted me.

6:00 pm: I venture over to the Protect Craft Guilds section for the first time, and am pleasantly surprised to see the several state brewers guild booths manned by the men and women employed by each guild. At the Minnesota booth, cans of Surly lure me in, but it’s the other brews from smaller state breweries unable to attend the fest, like a Rye IPA from Urban Growler — an all female-run brewery—that really impress me. If you’re interested in checking out new breweries, and learning more about independent craft beer from each state, brewers guilds are a great resource.

6:12 pm:  I run into my first dinosaur, literally. I politely exchange apologies with the Booze Raptor, and we continue on our way.

6:30 pm: I start my long journey through the three rows of breweries in the Meet the Brewers booth. At a festival that’s known for a huge volunteer base that pour beer in place of brewery representatives at most booths, it’s nice to be able to actually grab a beer from someone who can tell you a little more about it. Several popular breweries landed in this section, which was a generic line of slightly decorated black table cloth-clad tables connected together — until the City Star Brewing booth — which was built to stand out in the towering shape of a country farm barn.

7:22 pm: I swing by the Black Project Spontaneous & Wild Ales booth and am met with disappointment and a sign saying the brewery is out of beer for the evening.

7:25 pm: Spotting a rare short line at Dogfish Head booth which was casually decorated this year apparently to look like my grandma’s basement, I seize the moment and grab one of the brewery’s delicious and citrusy Flesh & Blood IPAs.

7:30 pm: The Good Bugs: Culinary Flavors of Yeast beer and food pairing kicks off in the Beer and Food pavilion. Led by Jensen Cummings of Brewed Food, the first pairing is three different types of sauerkraut made using yeast and bacteria also found in the three different beer offerings paired with the dish. Breweries like Fremont Brewing, Odd 13 Brewing, and Rhinegiest all brewed beers specifically for this pairing — which showcased a rising trend of breweries using yeast to impart major flavors on their beer.

7:45 pm: I get my first unpleasant whiff of other things “fermenting” at the festival.

8:30 pm: I discover the massage therapists waiting in the wings of the main hall, tempting beer drinkers on a mission with a few minutes of peace and quiet amidst a room full of somewhat organized chaos.

9:00 pm: I get a taste of Allagash Brewing Co.’ s Fluxus 2017 — an anniversary beer the brewery recreates each year. This year’s version is a mixed-fermentation saison brewed with rhubarb and packed with flavor.