(Seattle, WA) – Great Pumpkin Beer Festival (The Granddaddy of Them All) to Seattle Center this year turned out to be one of those things. After encountering a few too many logistical and regulatory hurdles to easily overcome, the folks at Elysian have decided to give it another year at their production brewery location at 5510 Airport Way in Seattle’s Georgetown neighborhood. The festival will take place the same weekend–October 3 & 4, and will feature over 80 different pumpkin beers, as well as pumpkins several hundred to over a thousand pounds filled with beer. 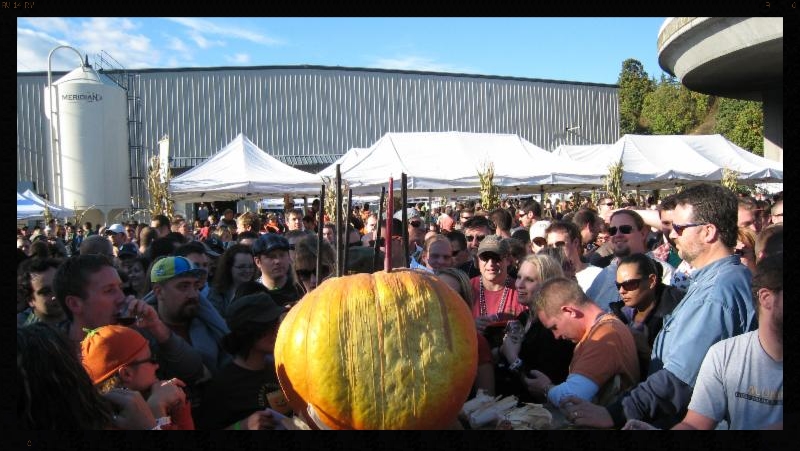 Elysian believes that GPBF has taken on a life of its own to become not just an Elysian event, but a Seattle festival anticipated and enjoyed by people from all over the country. It’s also an opportunity to honor dozens of local breweries who’ve scratched their heads and come up with a massive array of interesting styles and interpretations of pumpkin beer, and to tie in with the farmers who grow the big pumpkins Elysian’s brewers hollow out, scorch, fill and wax shut for the ceremonial tapping during the festival. Someday all that may take place in the shadow of the Space Needle, but for this year it’ll be in Georgetown.

Any good beer festival has more than just beer to celebrate, and GPBF will be no exception. There will be games, costumes, the passing of the tiaras from 2013’s Pumpkin King and Queen to this year’s gourd-royalty, KEXP DJs Riz Rollins and Stevie Zoom, Chaotic Noise Marching band, and of course pumpkin carving. Another someday in the future will allow kids into the festivities, but for now the event is 21 and over. It’s also a chance to sneak a peek at the place where Elysian works its brewing magic, and to drift on over to some of the great and quirky businesses that have sprung up in Georgetown.