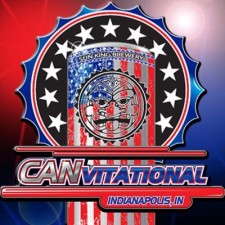 The Sun King CANvitational will bring over 40 craft breweries representing 23 states and international breweries to Georgia Street and Pan Am Plaza from 1 p.m. to 5 p.m. (EST). Tickets, available online at www.canvitational.com, are $60 for general admission day of the event and $75 for early entry. Sun King is running a $40 ticket special for advanced general admission ticket purchased online before August 31st. Event proceeds to benefit the Arts Council of Indianapolis.

The invited breweries were selected because of the quality of craft beer they are producing and, as the name of the event suggests, the festival will feature breweries that can their beers. Since craft beer’s inception in the 1980s, bottles have been the most commonly associated with craft beer. However, over the last decade the breweries featured at the CANvitational have been led a revival of craft canning and helped change the way people view cans.

New to this year’s festival, the CAN’d ART show on Friday, Sept. 19th located in the Indianapolis Arts Garden. A celebration of the CANvitational’s partnership with the Indianapolis Arts Council and the unique art that adorns the cans we love. Local artists have selected a variety of cans from participating breweries attending the 2014 CANvitational and transformed them into reinvented pieces of art. Join participating brewers and artists in a reception where art and craft (beer that is) collide. Event tickets include complimentary appetizers and FRESH•LOCAL•BEER will be available. Tickets are very limited.

“We believe that cans are the best way to package beer and breweries from across the country, including a great number of highly respected and established breweries, have help affirm that idea by choosing to can their beer.” Said Sun King Co-Founder Clay Robinson. “Cans keep beer safe from two of beers greatest enemies, sunlight and oxygen, in a way that glass bottles can’t. Cans are also more environmentally friendly to make, transport and recycle, which is why so many breweries are currently making the choice to can.”

In addition to great, canned craft beer, attendees will have plenty of food options for purchase from food trucks that will line Georgia Street. Music will be provided throughout the event by DJ Helicon and DJ Action Jackson.

“We have invited our friends from across the country who share our passion for crafting world class beers and we are excited to showcase what they do and why we can.” Robinson added. “The most exciting part is that the majority of the beers available at the CANvitational aren’t even available in Indiana, which gives us the opportunity to provide a truly unique experience!”

About Sun King Brewing Company
Sun King Brewing Company is the brainchild of Dave Colt and Clay Robinson. With the help of family and friends – Omar Robinson, Andy Fagg and Steve Koers – the first keg of Sun King beer rolled out the door for delivery in July 2009. Now available on tap and in cans at over a thousand locations throughout Indiana, Sun King has grown into the second-largest beer brewer in the state. The company’s commitment to handcrafted seasonal and specialty beers has been rewarded with multiple medals at the Indiana Brewers Cup, Great American Beer Festival and World Beer Cup competitions.