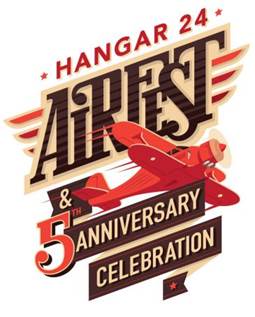 Aerial acrobats, vintage warplanes, nighttime fireworks shot from aircraft, food trucks, musical acts and special archival beer releases will be the order of the day as Hangar 24 Craft Brewery celebrates its fifth year anniversary in an event billed as the Hangar 24 AirFest and 5th Anniversary Celebration . To be held at the Redlands Municipal Airport on May 18 from 9 AM to 10PM, tickets are $5 presale and available online at Brown Paper Tickets and at the brewery Tasting Room.  At the door, tickets will be $8. Ages 12 and under are free. A limited number of VIP tickets will be available through Brown Paper Tickets, for $125 each, which will include VIP parking, food and beer served in an exclusive tent, as well as seating.

It will be a thirteen-hour event where proceeds go to benefit the newly-formed Hangar 24 Charities, whose mission is “to help preserve our Southern California orange groves.” The event is part air show, part concert, and part food and beer festival. Other family entertainment will be available as well, including a climbing wall.

For what is a first for a brewery, putting on an air show for Hangar 24 is an almost natural progression of its annual anniversary parties.

“Our Brewery was named after an actual aircraft hangar at Redlands Airport,” said owner Ben Cook. “So now, to hold an air show at the same airport is almost a perfect fruition of what Hangar 24 is all about: talking aviation, hanging out with friends, listening to music and drinking good beer.”

Aerial acrobatics will be provided by Jon Melby, Vicky Benzing, and Bob Carlton.  Kent Pietsch will be executing an amazing landing on a moving RV, as well a comedy act that features dead stick aerobatics.

Already onboard as key sponsors of the event are the City of Redlands, Hospitality Dental, Redlands Police and Fire Departments, and Redlands Aviation. Hangar 24 Charities is looking for more sponsors and volunteers for the event. Those interested in volunteering can sign up at www.hangar24charities.com and anyone interested in a sponsorship can contact [email protected].

Various parking lots near the airport will be open and shuttles are planned to and from Downtown Redlands, in order to encourage visitors to experience Redlands’ thriving downtown shopping and nightlife.

More information is available on www.hangar24airfest.com.

Hangar 24 Charities was created in an effort to help preserve our Southern California orange groves. The organization works to protect, advocate for and maintain both new and existing groves in an ongoing effort to conserve our rich citrus heritage.

Hangar 24 Craft Brewery was founded in 2008 in Redlands, California and is widely known for their flagship beer, Orange Wheat. Named after a specific aircraft hangar at Redlands Municipal Airport, where Founder and Master Brewer Ben Cook would hang out after an afternoon of flying to talk aviation, play music and share a few cold ones that Ben just finished brewing at home. The Brewery and Tasting Room were established and still operate in a renovated hangar directly across the street. Hangar 24 embodies a true passion for good beer, the absolute love of flying and the pure enjoyment of being around great friends.