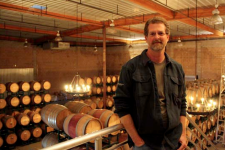 If you’re a Firestone Walker fan who doesn’t know who Jeffers Richardson is, then we advise you to take note. Jeffers is one of California’s pride and joys in the craft beer world and will be at Chloe’s at Golden Road Brewing tomorrow for an intimate event. Sip on some Firestone brews and pick his brain during a Q&A with Firestone Walker’s original brewmaster. Currently in charge of Firestone Walker’s Sour Program and the new Barrelworks in Buellton, Jeffers truly helped pioneer barrel-aging beers as well as fine-tuning recipes for such brews as Double Barrel Ale–one of Firestone Walker’s iconic brands.

Firestone Walker beers will be available individually or as a flight in addition to a la carte food from The Pub at Golden Road. Executive Chef Adam Levoe will also feature a dessert pairing featuring FW’s Sucaba. The event takes place inside Golden Road’s pub-within-a-pub, Chloe’s from 7pm-11pm.

For more information on this event, visit the official events page here.

PS: Jonny Fullpint and his blood brother Danny Fullpint will be on hand to fist bump and high five throughout the evening!