Durango, CO – On Monday, July 21st owners and representatives from six of Colorado’s leading craft breweries will depart on the ride of a lifetime…for the sixth year in a row. Commencing at Avery Brewing Co. in Boulder, CO and culminating at Ska Brewing Co. in Durango, the annual Tour De BoulDurango is a five day, 426 mile road bike ride through some of Colorado’s steepest and most grueling road terrain. This year’s venture features riders from Avery, Ska, Boulder Beer, Left Hand, Oskar Blues, and Great Divide breweries. 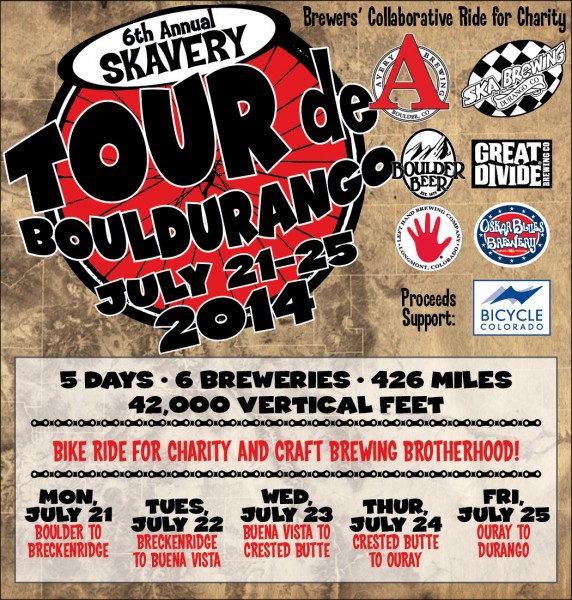 Out of the gate the tour will call for a 109 mile ride through Golden and over Loveland Pass before descending onto Breckenridge Brewery. As day one concludes it is likely the riders will reflect on all of the pedaling still to come. “As busy as we all are, I think it’s good to get out in the Colorado hills with some of the state’s brewing pioneers and share a few ideas, as well as a few beers,” says Adam Avery of Avery Brewing Co. “Collectively, we have hundreds of years of brewing experience amongst us—good ideas are bound to take root at some point before delirium takes over toward the end of the week” Friday will mark the final stage of the ride from Ouray, over three mountain passes, and into Durango.

The cycling brewers are scheduled to arrive at Ska Brewing Co. at 5:00 p.m. on Friday, July 25th. The ride culminates with Finish Fest, a finish line celebration featuring beers from all of the participating brewers as well as the collaboration brew, Wheelsucker Wheat. “This year we are really trying to encourage interaction and community involvement statewide” says Dave Thibodeau, President and Co-Founder of Ska Brewing Company, “Whether that means joining the riders for a beer at the end-of-day watering holes or helping us rustle up some coin for Bicycle Colorado. We have some new toys this year that will make it easy for all the pedal heads and beer drinkers to join in.” The brewers will be using Insta-Mapper GPS tracking software making it possible for anyone, anywhere along the route to join the riders, cheer them on, or see when it’s time to head to the pub. Bicycle Colorado, an organization dedicated to building a bicycle friendly Colorado is the beneficiary of Tour De BoulDurango and is cited by the League of American Bicyclists as the model organization for the country’s forty nine other states.

Why: To encourage the spirit of collaboration, camaraderie and giving back that the craft beer world is known for, and to raise money: All proceeds from Finish Fest will benefit Bicycle Colorado, a nonprofit organization dedicated to building a bicycle-friendly Colorado.

About Avery Brewing Company
Established in 1993 in Boulder, CO, Avery Brewing Company has developed a reputation as being one of the most daring and visionary breweries in the nation. They are the brewers of Avery IPA, The Maharaja Imperial IPA, White Rascal Belgian Wheat Ale, Mephistopheles’ Stout and eighteen other year-round and seasonal beers.