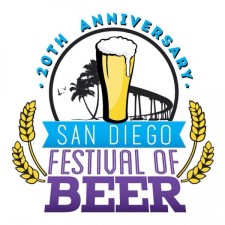 San Diego, CA – San Diego Professionals Against Cancer today announced that the 20th anniversary of its annual fundraising event, the San Diego Festival of Beer, will be held Friday, September 19, 2014 from 6-11 p.m. at a new location on Broadway Pier.  Presented by San Diego Professionals Against Cancer, San Diego Festival of Beer guests can sample from nearly 60 breweries and 120 varieties of some of the nation’s best craft beer, enjoy live music, purchase food from San Diego food trucks and restaurants – all while raising money for local cancer charities.

Early bird ticket pricing is available now through August 20 for $30 and will increase to $40 starting August 21. Tickets can be purchased online at www.bit.ly/sdbeerfest.

New for 2014: Padres Ticket Deal
SDPAC has partnered with the San Diego Padres this year and will offer San Diego Festival of Beer ticket purchasers the opportunity to purchase discounted tickets (up to 40% off regular prices) to the Padres-Giants series Sept. 19, 20 and 21. For every ticket sold, the Padres will donate $3 back to SDPAC. For more information, visit www.sdbeerfest.org/tickets.

2014 sponsors include Rock 105.3 and 101 KGB and the WestCoaster. For sponsorship information, visit www.sdbeerfest.org/sponsorships.

Each ticket includes admission into the event, 10 (4 oz) beer tastes and a special souvenir tasting mug for the first 3,000 attendees. Additional tastes may be purchased inside the event, $10 for 10 additional tastings and $5 for five tastings. Wine and merchandise are also available for purchase, as well as food from dozens of local vendors and food trucks. Credit cards will be accepted at the gate and an ATM will be available on site.

20th Anniversary T-shirt Design Contest
“When we first started this festival in 1994, we had no idea how much it would grow,” said San Diego Professionals Against Cancer Board President Carri Chandler. “That first year we had maybe 700 people; 20 years later we have around 4,000 attendees. We really want people to know that when they come to the San Diego Festival of Beer, they aren’t just celebrating great craft beer with friends; but they are raising money to help people in our community. To date, we have raised over half a million dollars for local cancer charities and that is the reason we do this year after year! This year is going to be the best event yet, we’ve already had 53 breweries sign up so far, a new record, and we’re still two months out from the event. With our new location on Broadway Pier, I think this year’s festival is going to be new and exciting and something people will remember.”

About San Diego Professionals Against Cancer
San Diego Professionals Against Cancer (SDPAC) is a non-profit organization dedicated to generating monies for cancer research, patient treatment, and services through fundraising events, our flagship San Diego Festival of Beer. The organization is comprised of local area professionals who volunteer their time, energy, and resources to organize local social events with the mutual goals of raising money for charity, benefiting corporate sponsors, vendors and donors, and creating a source of entertainment for the local community.  www.sdpac.org