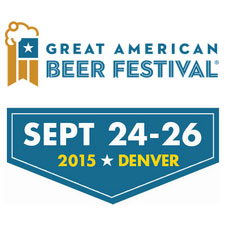 (Boulder, CO) – Representing the largest collection of U.S. beer served in a public tasting event, the 34th annual Great American Beer Festival (GABF) grows even grander this year. Presented by the Brewers Association, GABF will offer 90,000 additional square feet in the tasting hall, allowing 60,000 attendees to sample over 3,500 beers from 750 breweries from all over the country.

“There is no other place on the planet where people can sample such an expansive and unique assortment of beers. The sheer size of GABF is what makes it the marquee event for beer lovers,” said Nancy Johnson, event director, Brewers Association. “We’re thrilled to be able to accommodate more attendees than ever with even more opportunities to learn about the world of great American beer.”

Educational and entertainment opportunities can be found throughout the festival hall, as well as in the new BeerX: The CraftBeer.com Experience. The 2,500 square-foot pavilion will be packed with interactive stations about the art and science of brewing and the enjoyment of beer, including:

The new expanded section of the GABF tasting hall will also serve as home to the Meet the Brewer booths. Made up of just under 100 breweries, the Meet the Brewer area will have brewers or brewery staff on hand at each booth the entire time, pouring beer samples and talking to attendees about their offerings, with no assistance from GABF volunteers.

“GABF has a long-standing tradition of giving beer lovers the chance to meet and mingle with the brains behind the brands,” added Johnson. “Meet the Brewer booths build on that tradition and are a dedicated area where GABF guests are personally served by the brewer.”

About the Brewers Association
The Brewers Association is the not-for-profit trade association dedicated to small and independent American brewers, their beers and the community of brewing enthusiasts. The Brewers Association (BA) represents more than 70 percent of the brewing industry, and its members make more than 99 percent of the beer brewed in the U.S. The BA organizes events including the World Beer Cup®, Great American Beer Festival®, Craft Brewers Conference & BrewExpo America®, SAVOR℠: An American Craft Beer & Food Experience, AHA National Homebrewers Conference, National Homebrew Competition and American Craft Beer Week®. The BA publishes The New Brewer magazine and its Brewers Publications division is the largest publisher of contemporary and relevant brewing literature for today’s craft brewers and homebrewers.