To the average craft beer fan, the coming of spring doesn’t just mean light and refreshing seasonal brews…it means event season has come. From here on out, you will find no shortage of events from beer festivals, anniversary parties, to special releases. To kick off the season, here are three craft beer events happening in the greater Los Angeles area on Saturday, April 4, 2015.

Tony’s Darts Away 5th Anniversary | 10am 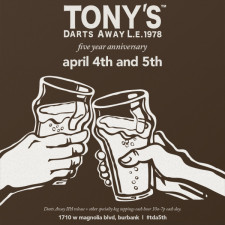 Game of Thrones + Ommegang Third Eye Raven Launch at Blue Palms | 1pm
It’s been a while since we’ve seen a new Game of Thrones beer from Brewery Ommegang. Once again, Hollywood’s Blue Palms Brewhouse will be going all out to promote the launch of Third Eye Raven,  a saison released just in time for spring. Tickets to this event include a commemorative glass, your first pout of Third Eye Raven, and an order of tasty Third Eye Raven wings from the Blue Palms kitchen. Did we mention the photo booth with the Iron Throne? Come in costume and you might win a prize — if that’s your kind of thing. You’ll find us in the bar enjoying an special taplist for the occasion featuring other Ommegang brews (sup, Three Philosophers?) along side some other similar styles such as Boulevard’s Tank 7 saison. Get your tickets here. 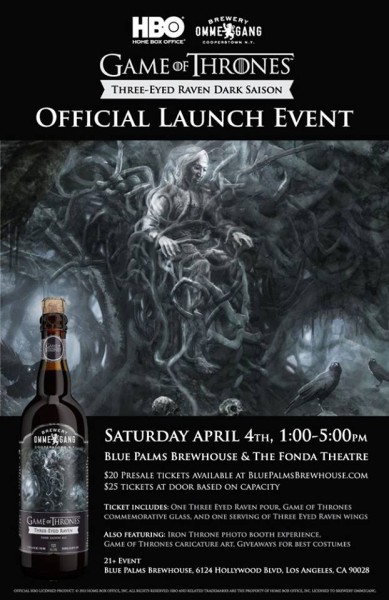