A Glimpse at Elysian Two Years Beyond the ABI Buyout

As the world’s largest beer company, Anheuser-Busch InBev is a victim of their own success. For many a craft drinker, a brewery buyout at their hands signifies an uncrossable red line. The beer itself can be as tasty as ever, but once ABI is signing the paychecks, they’re interested in nary a pint. A principled stand, or misguided prejudice? Yes. We checked in with one of their more prominent acquisitions, in search of observable changes —for better or worse. What we found might make you reconsider your stance on ‘selling out.’ 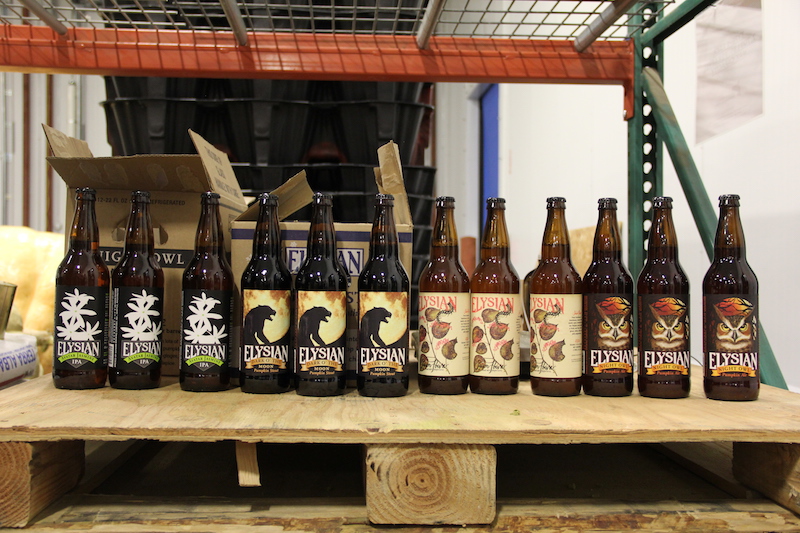 “There was a big drop in sales,” recalls Tim VanDragt of Chuck’s Hop Shop in Seattle, WA. The manager of one of the city’s finest craft beer bottle shops was referring to Elysian Brewing, purchased in early 2015 by ABI. “Sales definitely took a hit when they got bought out. Elysian was our hometown brewery and for it to be bought out by an international company was a blow.”

In the twenty years since opening, Elysian had grown into Seattle’s largest craft purveyor, employing over 250 people across four pubs and a production facility. Co-owner Dick Cantwell was on the board of the Brewers Association, and literally helped define ‘craft beer’, a term which no longer applied to his brewery after the sale. The move initially sent shockwaves throughout the region — and beyond. But two years removed from the acquisition, its easier to embrace it as more than just a simple cash grab. With steadier access to specific hops, Elysian is now able to insure greater consistency in Spacedust, their flagship IPA. They’ve ramped up production considerably, adding jobs and expanding their core offerings as a result.

With broader distribution channels, Elysian can focus on delivering their beers to a larger audience. Yet they still haven’t forgotten about the community that birthed them, pouring more money than ever into local events such as their Great Pumpkin Beer Fest. Its 12th annual rendition in late October offered more beers in a bigger location than in year’s past, and sold out despite a predictably cold and wet autumn evening in Seattle. Looking around at locals, enjoying Elysian’s speciality one-off, conditioned in a 400 pound pumpkin, it was difficult to imagine conglomerated ownership doing anything to diminish the festivities.

But for local retailers, a challenge remains. “We do what we can to educate people that the beer hasn’t changed at all,” says VanDragt. “It’s the same beer they’ve always loved; the same people, the same ingredients.” Regardless, with so many names in craft — particularly in a market as dense as the Pacific Northwest — it’s tough to make a case for a beer that is no longer locally-owned.

“There are so many tasty beers to try and some of my favorite local beers are way cheaper,” observes local drinker Matt Gallagher. “I’ll order a pint at the bar sometimes, and the Elysian pubs are still fun places to hang out.” He adds that his viewpoint is formed not by business matters so much as what’s inside the glass. “Good for them, cashing in. That doesn’t bother me at all. If the beer tastes good, I drink it.”

Yet that’s hardly the prevailing attitude around these here parts. “In Seattle, we care about what’s ours very strongly,” VanDragt points out. “When it no longer was ours, it became cheapened in a way.” Though that hasn’t affected sales of Spacedust, which he notes are as strong as ever.

That’s good news for the hard-working locals inside the brewhouse, the oft-forgotten collateral casualties of big buyouts. They aren’t the ones that decide to ‘sell-out’, they rarely reap the direct rewards of the sale, and they’re the ones sticking around, continuing to make the beer once ownership switches hands. Boycotting a brewery is more detrimental to them than it ever could be to ABI’s bottom line.

Regardless of these truths, a buyout will always feel like a betrayal to some. It’s an understandable emotional response, and one that no amount of consistently well-brewed beer can remedy. If you’re taking such a stand, I certainly won’t begrudge you. Just don’t kid yourself: your favorite independent craft operation — no matter how passionate — is still, very much a for-profit business. As such, it’s seeking to grow; to make more beer, and more money, without sacrificing quality along the way. Rarely does that pursuit organically end in self-sustenance. If you want to punish a brewery for becoming too successful, you’ll find plenty of camaraderie. But take a moment to consider who you are actually punishing. Beer feels no pain.

Brad Japhe is a freelance food and drink writer based out of California. Check out his portfolio here: https://bradleyjaphe.contently.com/