It has become increasingly difficult to keep tabs on all the newest, hype worthy beers when there are 7,500 plus breweries, and there is so much fun, innovative stuff coming out seemingly every day. Some of the more jaded will make claims that all hazy IPAs taste the same or that over fruited kettle sours and adjunct laden Imperial Stouts aren’t really beer, I think beer has never been more interesting with less limitations on what can go into a packaged beer.

With work and dad life consuming a lot of my time, I don’t get to trade and travel as much as I used to, but I am always open to trying new beers and looking for the next Noble Ale Works Naughty Sauce, a beer that redefined craft beer for me. I would like to share some of my favorite new beers I’ve come across in the 2019 calendar year. Please make sure you check out the our official best beers of 2019 authored by our expert taster GT Wharton [here.] 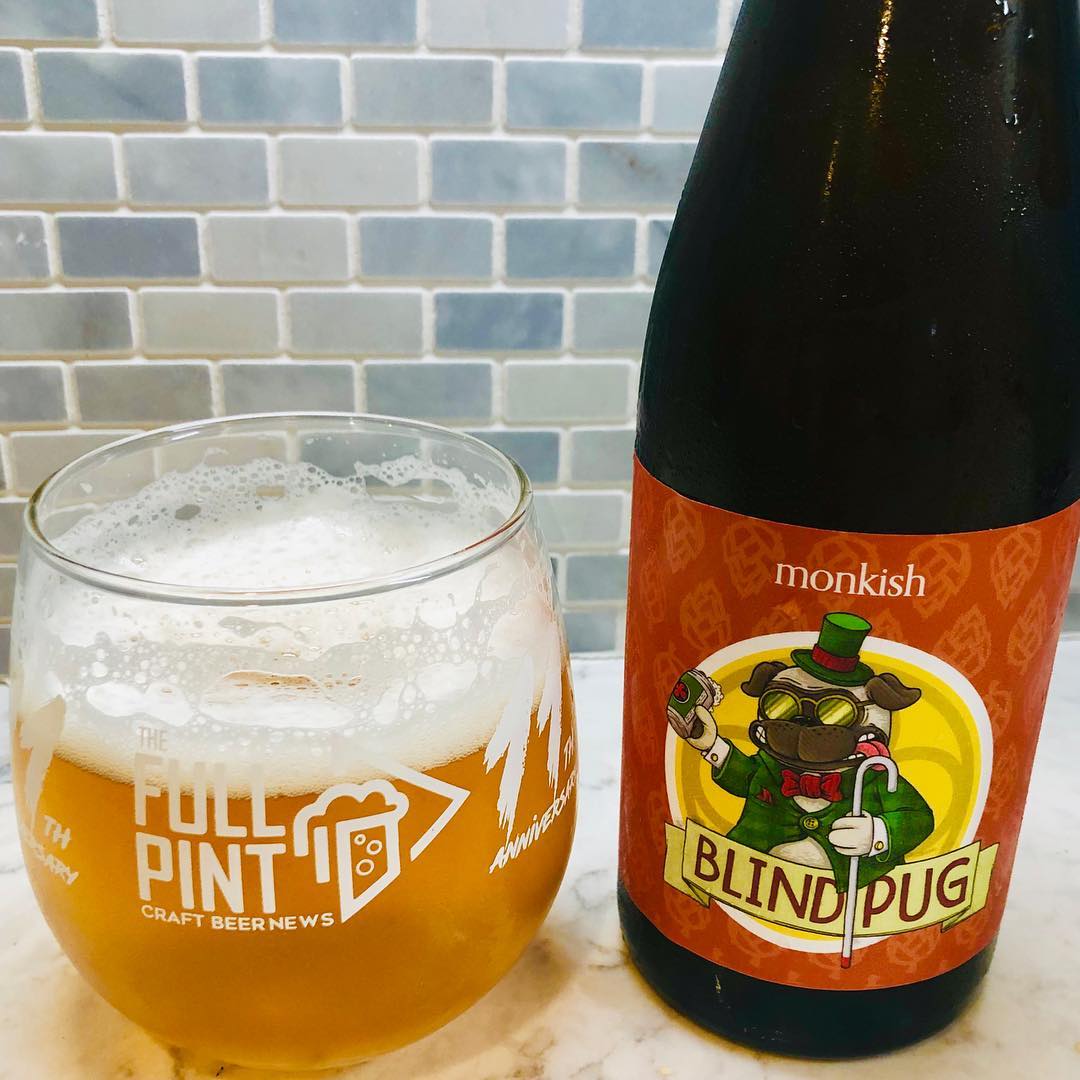 Monkish Brewing might arguably make the best hazy double IPAs in California, if not the entire country, and they are most known for that. Locals and those landing at LAX line up daily to snag a few four packs of whatever has been announced on Instagram that day. Many forget that Monkish started out making clean and mixed fermentation Belgian-style ales, or that whatever style they choose to brew is usually fantastic. The owners of Monkish installed a fancy new bottling line late spring, in order to diversify their packaged beer portfolio, and did the unthinkable. They brewed a West Coast IPA! Not just any West Coast IPA, but an homage to Russian River’s Blind Pig IPA. The Monkish family has some adorable pug dogs and so they brewed and bottled Blind Pug. Unlike many breweries that liberally borrow other’s intellectual property, Monkish got full blessings from Russian River to honor the iconic beer with Blind Pug. All cuteness aside, Monkish made a wonderful clean, West Coast style IPA that came close to the mark of Blind Pig, but seemed a little more three dimensional.

Revolution Brewing has been on a roll since they moved their Deep Wood series beers from bomber bottles to 12 oz. cans. It’s a more convenient format for those who want one glass of strong beer. They’ve been offering more and more variants of their barrel aged stouts and barleywines, and announced two new additions to the Straight Jacket family with Strawberry Jacket and Honey Jacket. The biggest of dorks thought Revolution might have been covering up some brewing flaws with the additions of Strawberry or Honey in their barleywines, but it was explained that they were leveling off some sharper barrels from their stock. Anyone can feel free to correct my interpretation of this. Anywho, both beers were very delightful, but Honey Jacket was my favorite out of the two new variants. It didn’t make the beer sweeter or cloying to me, it added some rich depth to an already impressive base beer. 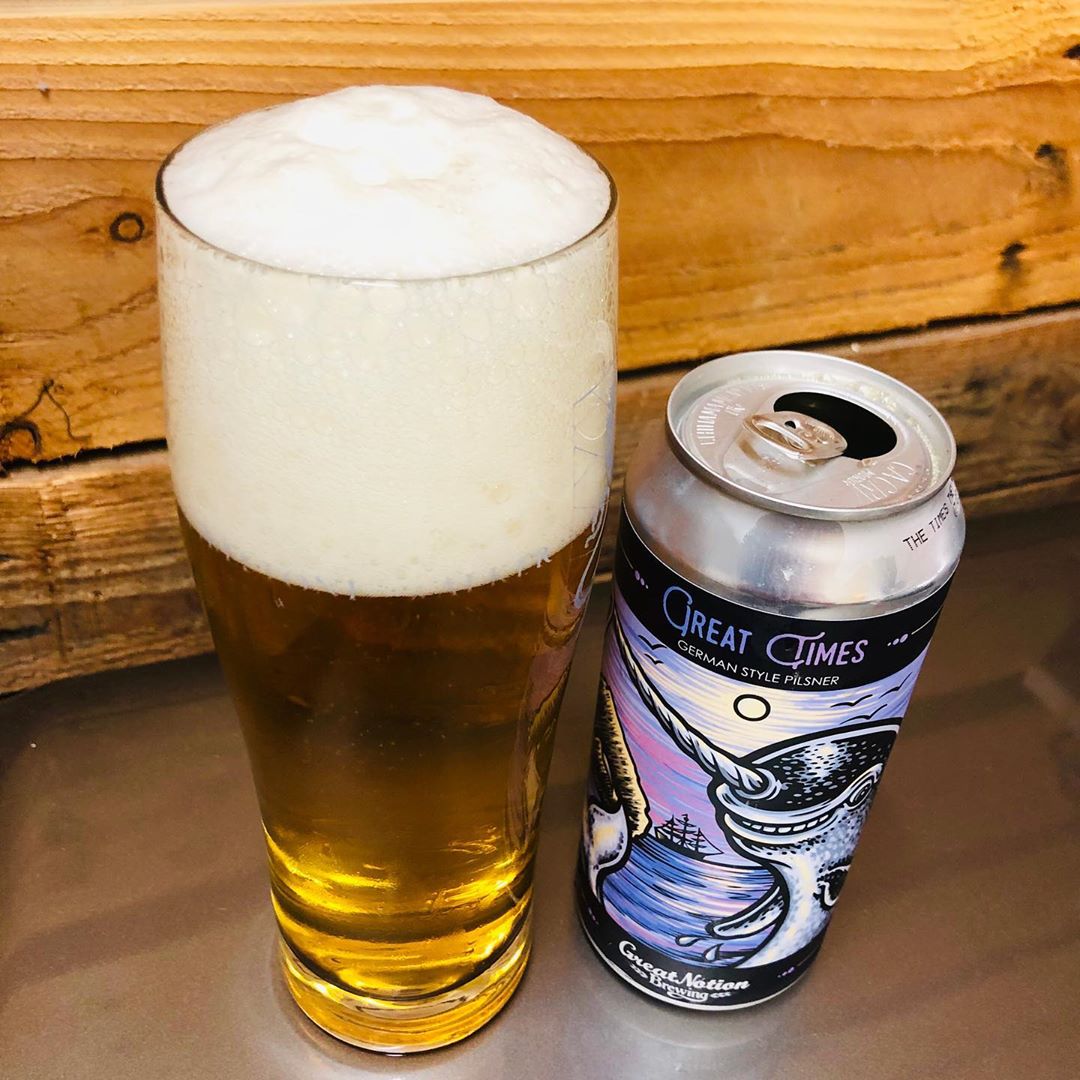 Both Great Notion Brewing and Modern Times get painted with the pastry brush as they are both fulfilling demand for those who like their beers on the sweeter side. That doesn’t mean that both don’t have the skill, palate or finesse to make a clean, drinkable lager. In the long list of collabs Great Notion and Modern times do weekly, they teamed up and brewed Great Times Pilsner. The beer was perfect and I’m hoping this gets rebrewed often. 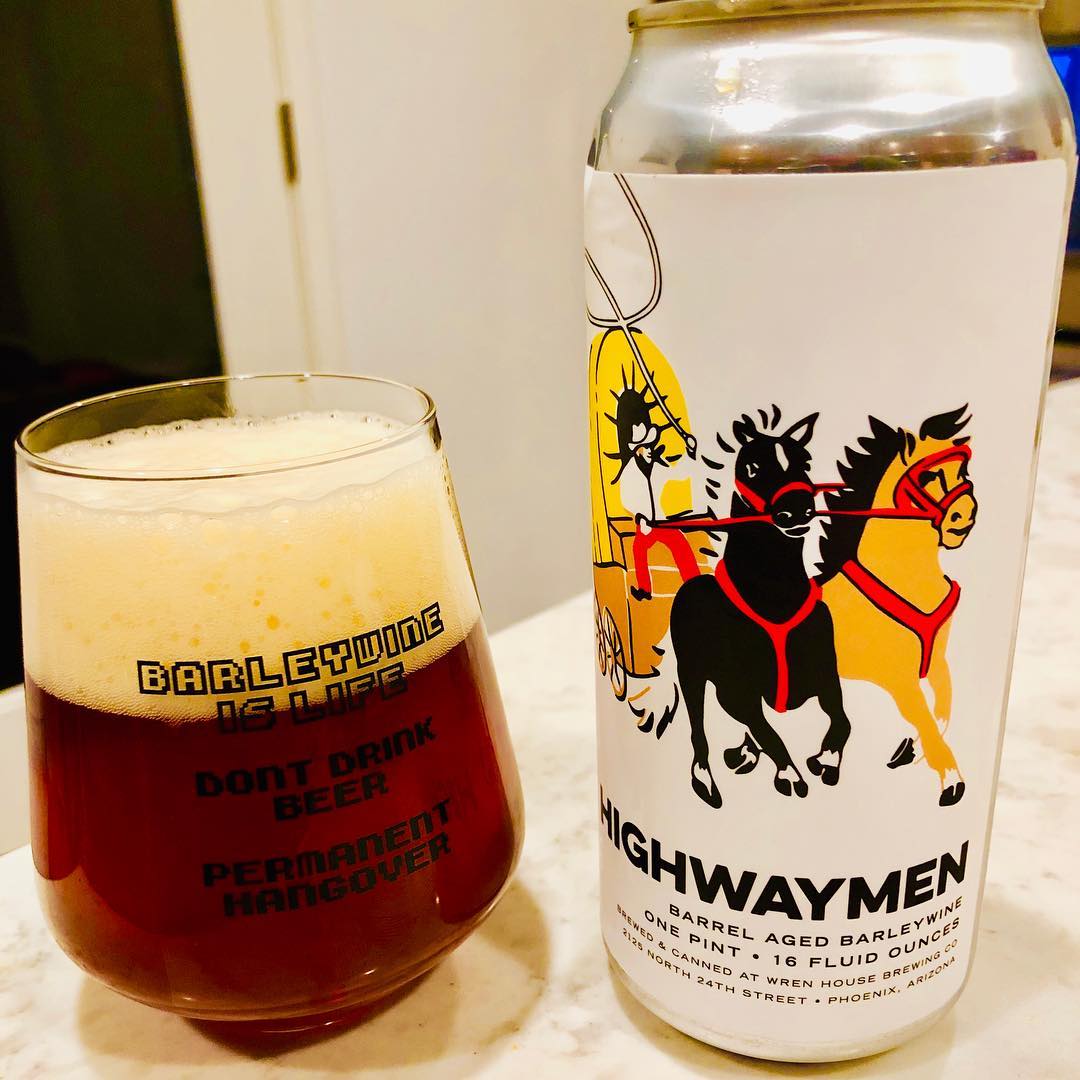 Another barleywine on the list! We are happy that more folks are leaning towards the English style of barleywine instead of the Bigfoot inspired American barleywine. When we visited Wren House Brewing a few times in 2018, we learned about their unique barrel aging program, in which they keep their spirit barrels in cold storage. They are sitting on small yet amazing stock, including many barrels of English barleywine. This year, they released Highwaymen, a bourbon barrel aged barleywine, and it was simply fantastic and well rounded. No heat, perfect level of whiskey, wood and dessert flavors, all in a 16 oz. can. 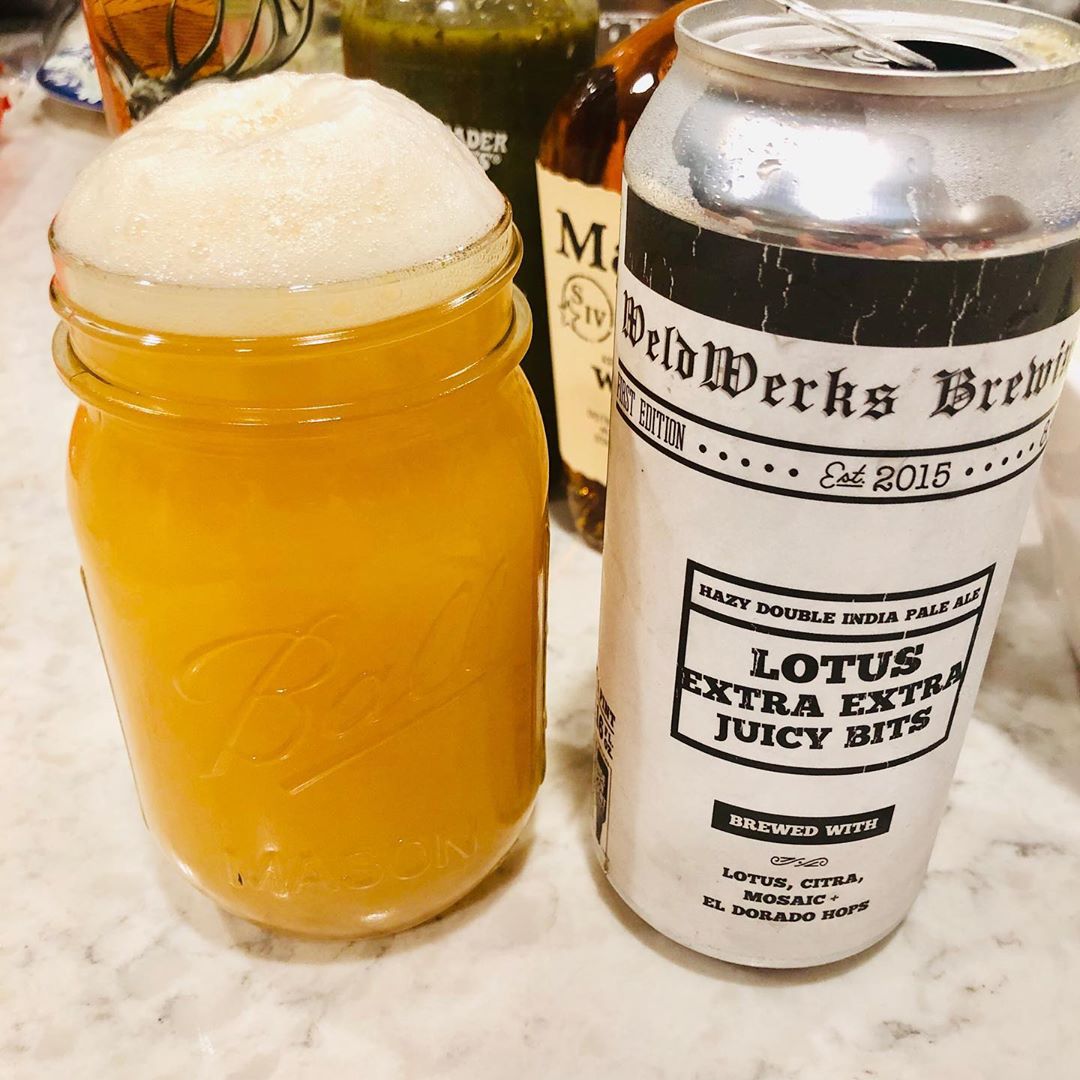 As I mentioned in the opening, there is a crowd of beer drinkers who might be a little burned out on trying to find a special hazy/New England IPA. Honestly, if you cram so much hops in a batch of beer, you lose some of the nuance. Delicious, yes, but noticeably different from another similar beer, not so much. I was caught off guard when I tried Weldwerks Extra Extra Juicy Bits, this variant with Lotus, Citra, Mosaic and El Dorado hops. Super fresh without the hop burn, a touch of bitterness in the finish so it doesn’t taste like a creamsicle and little to no booze presence.

The Full Pint was out in the Wisconsin this past summer, and met up with our dear friend from Chicago. Our friend brought various cans of beer for an impromptu bottle share. After a day worth of drinking, typically the beers all start running together. All of a sudden, I got a generous random pour and lost my mind. “What is this beer??!!” Why, it’s Listermann Brewing PRIDE – Imperial Berliner Weisse. While I carried on the rest of that evening, I didn’t let this one slip from memory. I shot a DM to my boy Jason Brewer over at Listermann and demanded he tell me more about this beer. Apparently, it was a beer made with a literal ton of sherbet. Not usually a fan of over the top gimmick beer, this beer was just amazing. Melted sherbet brings me back to the fondest memories of my childhood. I really hope they brew this again.

Since Horus began dropping these ridiculous luscious stouts last year in the Goshawk’s series, we’ve been sampling a little here and a little there. I’m one of those people that normally don’t drink more than a 6 oz. pour of adjunct stout. Enter Three Chiefs Brewing, a small startup here in LA with tons of fanfare surrounding them, we decided to pluck some Hazelnut Crown and Coconut Crown, both being collabs with Three Chiefs. The beer begins with a perfect stage of hazelnut coffee, then is completely saturated with (read this like Bubba from Forrest Gump) coconut candy, coconut syrup, coconut water, desiccated coconut, shredded coconut and toasted coconut. I absolutely loved this beer. The hazelnut coffee gave balance to all that coconut somehow, and I think that’s why I picked this over Coconut Crown, which believe it or not, has even more coconut than this.

Highland Park Brewery has really found their groove with IPAs (hazy and clear), lagers, stouts and mixed fermentation beers. Admittedly, I’ve tried so many of their IPAs, they are all starting to run together in the notepad in my head. It’s not a bad thing as I enjoy them all. Our beertender friend Nick recommended we try this new West Coast IPA called Confirmed Goodness, brewed with hand selected Citra from this year’s hop selection up north. This beer knocked my socks off. It was reminiscent of an Alpine Beer Co. beer at it’s peak and was magical like the first year of Kern River Citra. 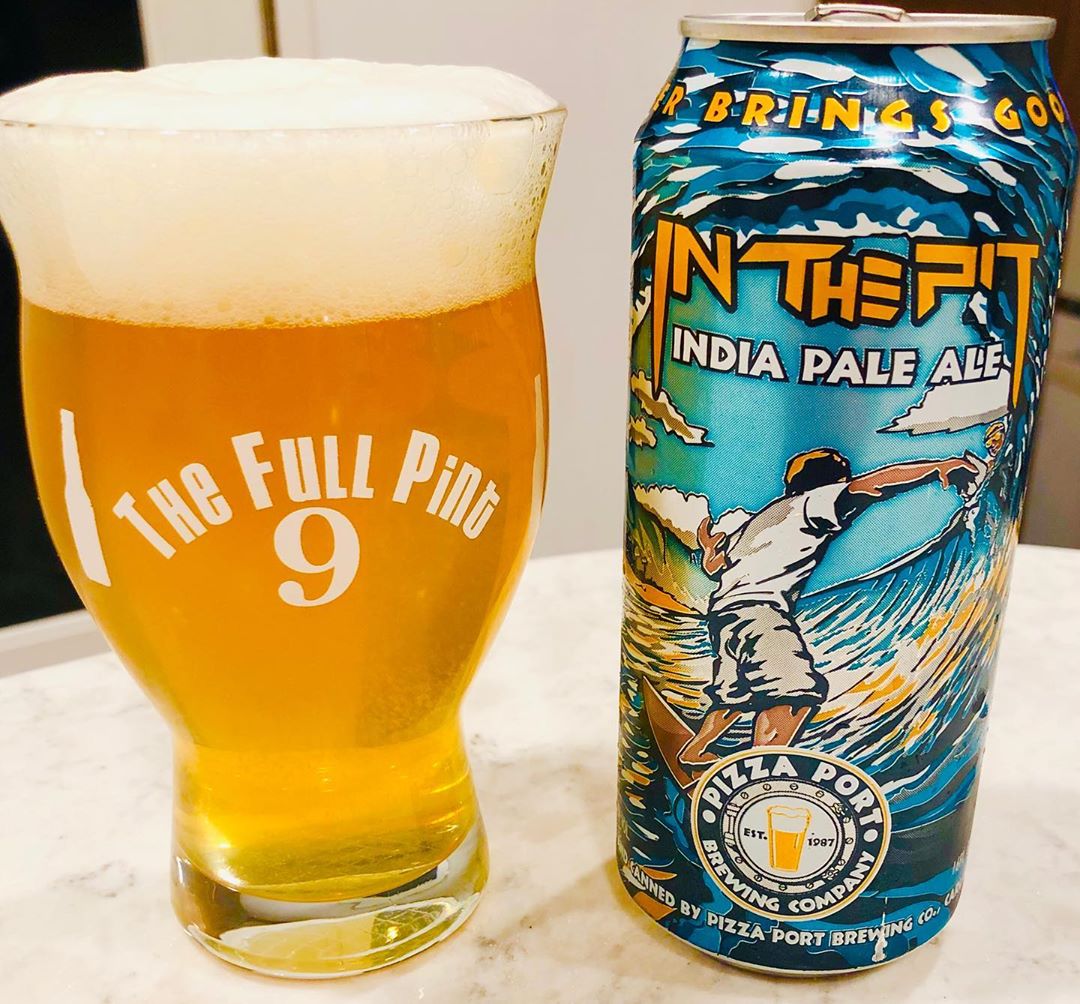 We’ve been blessed by fresh Pizza Port Swami’s IPA all year round. Never a can older than 4 weeks old but typically 2 weeks old. We also have been blessed with special release can drops at our local Trader Joes, so we get to try over a half dozen recipes that deviate from the magical Swami’s hop blend. One of our favorite beers this year and of Pizza Port’s special releases was In The Pit, a West Coast IPA collab with the sunglasses company Pit Viper. Really just another Pizza Port classic, this had some aromas of some of the newer hop varieties with a super clean finish.

We invited over 50 breweries to participate in our 12th anniversary kegger this year. One of the breweries we were most proud to accept our invitation was Temescal Brewing out of Oakland. We visited them the year prior during the Nor-cal leg of our tour and fell in love. They have very welcoming vibes and branding, but just as important, very great beer. Knowing that our parties are usually heavy on big ipas and stouts, Temescal sent us a beer called Fluffy Pils. This is a 4% pilsner brewed with spelt. Even at 4%, it was full bodied, full flavored and yes, fluffy. I could drink this beer all day and hope to accomplish that in 2020.

Some New Stops for San Diego Beer Week How Are Some San Diego Brewers Weathering The Storm? Contract Brewing!