We continue on with our task of recapping 2016’s landmark year in the craft beer space. In our third installment, we talk about many significant changes, trends, as well important moves made by some of the biggest players under the craft beer umbrella. We hope you share, enjoy and stay tuned for part 4. 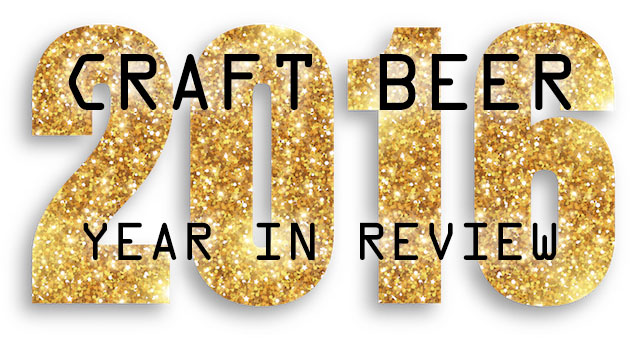 Stone Brewing – Stone Brewing had a very impactful 2016.  We saw them light up their Berlin and Richmond Virginia brewhouses.  We saw the departure of Brewmaster Mitch Steele, which was a shock to many.  Meanwhile, Stone continued to tweak the way they release new products, continuing to innovate while removing slow moving products. As industry leaders, the craft beer business as a whole was shocked when stone laid off many long time corporate employees, many of which were original employees.  In the middle of all of this, Founder Greg Koch announced an alternative funding initiative aimed at craft brewers looking to grow without selling out or selling a majority to private equity, dubbed True Craft. We look forward to seeing more developments in 2017 from the International craft brewers.

Dogfish Head – It was an interesting year for the mature medium sized brewery out of Delaware. We’ve seen DFH getting financing to compete with other breweries their size that are now leapfrogging them in popularity and sales.  Dogfish founder Sam Calagione stepped aside for a moment to let Nick Benz take the steering wheel in the CEO position, only to step back into the role.  Flesh and Blood debuted in response to the fruit beer craze this year, with great success, and at the end of the year, we saw they will be bending on their stance of no canning, to stay competitive with other brewers and products on the shelf.  While Dogfish Head is by no means in bad shape, anyone watching them can tell that they are at a crossroads in terms of relevancy and popularity, so it will be interesting what bold moves they will be making in the next two years to stay steady and or grow.

Rapid rate of new small and nano breweries, re: quality – As of this writing, we are at the 5,000 craft brewery mark. For the “movement” this is great.  There are however some not so desirable side effects. First, we have some people that have no business brewing beer getting fat loans, making bad business decisions and bad beer. We are seeing these folks drop like flies in the span of two years.  Then there are those people who bought “How to Homebrew” and scraped up enough money for a unit in a business parkway. They are “brewing beer” on a 1 bbl plastic semi-pro system.  Besides the obvious, these brewers are introducing people new to craft beer to some god awful beverages, and may be turning people off of beer for good.  Ultimately these folks will go away as well, but will not do so before doing damage to the name of hand crafted, independant beer.

Firestone Walker Brewing – It was a pretty nice year for Firestone Walker.  With the investment from Duvel from 2015, they were able to focus on what they do best in 2016: make good beer.  They released a rotating hoppy pale ale dubbed Luponic Distortion, which I chose as Beer of 2016, we saw them light up their Los Angeles / Venice / Marina Del Rey brew pub.  While being a 20 year old brewery, they managed to make some limited, brewery only release beers which garner some pretty significant fanfare. As of June 2016, Firestone Walker Invitational is still the hottest ticket of the summer, which is pretty impressive. Their sour program, BarrelWorks, continues to improve and impress as well.

Oskar Blues – Oskar Blues, with the help of their parent company Fireman’s Capital, has hit the 50 state mark, that brewers like Stone, New Belgium and Deschutes have been trying to hit in twice the amount of time.  They have kept their portfolio pretty simple and have morphed into a bit of a lifestyle brand.  They lit up their Austin, TX production facility this summer, and are beginning to grow their Perrin and Cigar City brands now as well.  They’ve ended this year with some cool tall cans of barrel aged beers, which have proven to be a delicious novelty. While I’m personally a big fan of this company, they fall under that gray area I mentioned in part 2, where some people don’t know whether to consider this company “craft” or not based on ownership structure and future sale speculation.

State of Session IPAs – The descension of the Session IPA happened this year.  Most mature breweries have all but retired their version of the Light IPA, as they proved to be horrible sellers next to their full bodied, full flavored, higher alcohol counterparts.  There are still a few breweries that have them, and no matter what the market says, they are freaking delicious. Crazy enough, you will still see some mature breweries trying to launch this style, and I wouldn’t doubt we see some new products in 2017 that will make you shake your head.

Women and craft beer – The topic of women in craft beer and woman in the context of craft beer culture was a big topic of conversation this year.  With more craft breweries than ever, there is now more job opportunities and in turn, more labor intensive jobs in the brewhouse being filled by females.  I will never pretend to know the challenges faced over the past few decades, but it would seem through education and positive promotion from brewing companies, that females who choose to work in the brewhouse are being promoted in a very positive light, in turn encouraging other women to enter the field.  I’m sure one could make an argument there is still a long way to go, from my view, it seems like it’s a great time to be a woman in the beer industry. In terms of women in the craft beer culture, the walls are being broken down daily by women who enjoy all types of beer, and are quick to shut down the notion women don’t like bitter, hoppy, highly flavorful beer.  I’m sure every 30 seconds, a bartender somewhere scoffs and offers a Lindemans, there is a movement going on quickly combatting that silliness.