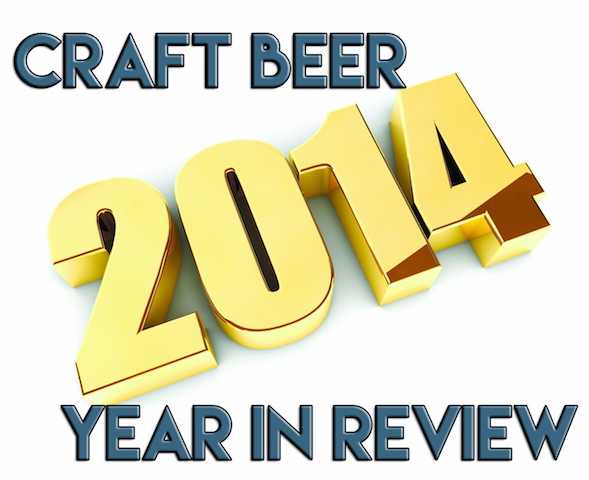 Cigar City Brewing – CCB remained a fan favorite to Tampa locals as well as enthusiasts nation wide. They’ve continued to nail it on their dark beers and experimental offerings, while paying the bills with their tamer canned lineup. They made big headlines this year when their annual Hunahpu’s Day went haywire.  Basically, they had a loose system in place to let people into the festival and purchase beer, and it got gamed by greed very quickly. After announcing that would be the end of their event throwing ventures, they went back and said they are strongly considering a re-deux for 2015.

Crowdfunding –  A few years ago a group of guys in Chicago heard about a new company called Kickstarter, a company that allows for people to map out their business plan and allow for people who believe in your idea to send in money to fund the dream. Those guys went on to successfully fund PipeWorks Brewing.  After their success, and the overall success of craft beer in the US, everyone and their mom began a crowdfunding campaign to start their brewery or get a beer related widget funded.  Right or wrong, because of the abundance of campaigns, this method of starting a company is largely viewed as a joke.

FiftyFifty Brewing – All was quiet with FiftyFifty Brewing for almost the entire year. That is until they held their annual Eclipse Release party.  For years, they’ve thrown this ticketed event, in which people willing to drive all the way up to Truckee would partake in generous amounts of Eclipse Imperial Stout, would be allowed to buy bottles and get offered a special brewery only bottle. With the hoarding and secondary market at a fevered pitch, FiftyFifty Brewing mistakenly offered Masterpiece Eclipse, a rare 200 bottle run with no bottle limit. Chaos ensued.

Great American Beer Festival – GABF is the single most important event for the craft beer industry. Held yearly in Denver, CO, it’s a destination for new and old craft breweries to validate their art/beer/product to the industry and consumers.  More than any other year, this year created some negative rumbles for many reasons. The fest has gotten way to big and has created ill will and hurt feelings. While this is a highly competitive industry, there has been much mutual respect and admiration between fellow brewers and breweries.  With a disproportionate number of Colorado breweries, California breweries and rookie year breweries fighting for a booth and spot in the judging competition, naturally some seasoned veterans have been left in the cold. While we are just here to cover it, we’d like to see some reform or reorg with this.

Jester King Craft Brewery – Jester King has continued to wow Texas locals as well as traders and tickers nationwide with creatively made fruited, barrel aged sour ales.  Scroll through a page or two of our Jester King archive to see just how often they are bringing a new experimental ale to market.

Muling/Secondary Market – A reoccurring theme in our 2014 recap is the spoils of the muling/hoarding/secondary beer market. Basically there is a supply and demand scenario that is causing people to greedily game a small bottle release just to turn around and sell the beer or make a lopsided trade. Many breweries are countering this culture by crying on the Internet that it’s not fair, making the release an online  ticketed event with proof of ID, or adjusting the price closer to the demand level. I predict more brewers will go the online ticketed route, unless of course they love this negative attention.

Reservation Societies – Whether you agree with it or not, The Bruery has pioneered the business model of pre-selling fancy beer in the form of a wine of the month club. In 2014, many breweries, some old, some brand spanking new have jumped on the reserve society bandwagon. Personally, I think it’s brilliant and those with a weak product will be weeded out of the game eventually. Here’s a list of dos and donts for those breweries planning one of these clubs.

Session Beer – Much like 2013 was the year of the Red IPA, this was the year of the Session Ale.  We saw Stone, Firestone Walker, Sierra Nevada, Oskar Blues, Green Flash, and more all put highly hopped, highly aromatic ales with alcohol levels under 5% this year. This style is so popular, it overtook Founders Brewing top seller spot with All Day IPA. As long as these beers stay fresh, they are great.

The Bruery  – The new kids on the block are all of a sudden 6 years old.  The Bruery keeps moving in a forward positive direction. They announced they would be separating their clean ale production from their barrel and wild ales, in a venture known as The Bruery Terreux, and have kept the Reserve Society, Hoarders Society and Preservation Society going strong. While The Bruery is taking great effort to keep the wild yeast away from their clean ales, they did run into a few snags in regards to slight bottle infection. Unprecedented in this market, The Bruery immediately recalls and refunds for products that have even the slightest bit of issue.