(Redlands, CA) – The stage is set, both on the ground and in the sky, for a possible record day at the Hangar 24 AirFest and 9th Anniversary Celebration on Saturday, May 20. Closing in on a decade of celebrating craft beer and aviation, the 2017 anniversary party at the Redlands Municipal Airport is poised to pass the crowd of 17,000 that attended the 2016 anniversary party as most attended. The 2017 celebration includes new aviation acts, new music acts, a bigger KidZone and the soon-to-be-announced anniversary beer. 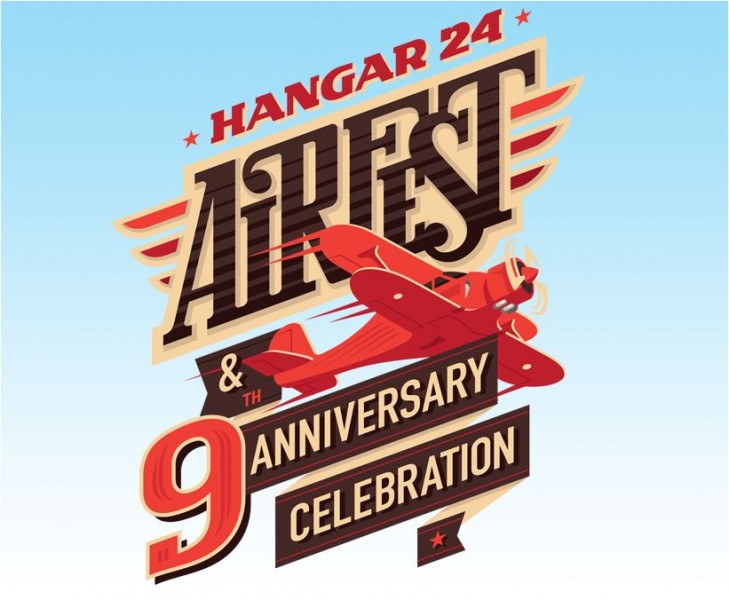 Now in its fourth year as one of the largest annual air shows in the Los Angeles basin, the Hangar 24 AirFest and 9th Anniversary Celebration is ready to welcome the first ever appearance from the US Navy’s F/A –18 Super Hornet, performing a single ship tactical aerobatic demonstration. A C-17 Globemaster, and a KC-135 Stratotanker from March Air Reserve Base will offer flybys, as well as a T-38 Talon from Beale Air Force Base on high-speed, low-level passes. Returning for a second year is the Patriots Jet Team, the largest civilian-owned aerobatic jet team in the Western hemisphere based out of Byron, California. There also will be a Bell-Boeing V22 Osprey tilt rotor aircraft on display from Marine Squadron VMM-166 based at Miramar Air Force Base.

New to this year’s air show lineup is 23-year-old Sammy Mason, a fourth-generation performer, who was the youngest show pilot in the world four years ago at the age of 19. Other acts include Vicky Benzing Areosports, the Smoke-n-Thunder Jet Car, Jon Melby’s Pitts S-1-1B Biplane and the Red Eagles Formation Team. Calling the action will be veteran air show announcer Lt. Colonel Jon “Huggy” Huggins.

Musical acts include headliner The Spasmatics, as well as Honky Tonk Boombox and Fender Centers Kids Rock Free Band. On the grounds of the air show will also be the largest AirFest KidsZone ever, with a series of events throughout the day for the younger generation. Highlights for kids include the arrival of Frozen’s Elsa, the Beauty and the Beast, magic shows, bounce houses, a Helicopter 305 from CalFire, a rock climbing wall, the return of the Home Depot workshop to build toy helicopters, and much more.

Parking is free for the second consecutive year, with gates opening and first pours set to take place at noon. Beer tickets are on sale until 8:30 p.m. with final pour at 9 p.m. The event ends at 10 p.m. Tickets are as low as $25 for a pre-sale fast pass, up to a $175 VIP ticket that includes food, complimentary beer (including barrel-aged beers), preferred parking, as well as preferred viewing for music and the air show.

More details, including ticket info and volunteer information, are available at hangar24airfest.com.

Hangar 24 is an independently owned craft brewery with locations in Redlands and Lake Havasu City, Arizona. The company produces a diverse award-winning line of beers ranging from the best-selling Orange Wheat to the exclusive barrel-aged Barrel Roll Series, including the renowned Pugachev’s Cobra.