(Torrance, CA) – Smog City Brewing is throwing an Anniversary party and they want you to come. Celebrating 4 years of brewing in the City of Torrance, Smog is throwing down with over 24 unique Smog beer taps, 2 artisan beer cocktails made some Smog beers, DJs spinning vinyl throughout the day and evening, and special limited release Anniversary ale and Smog glassware. 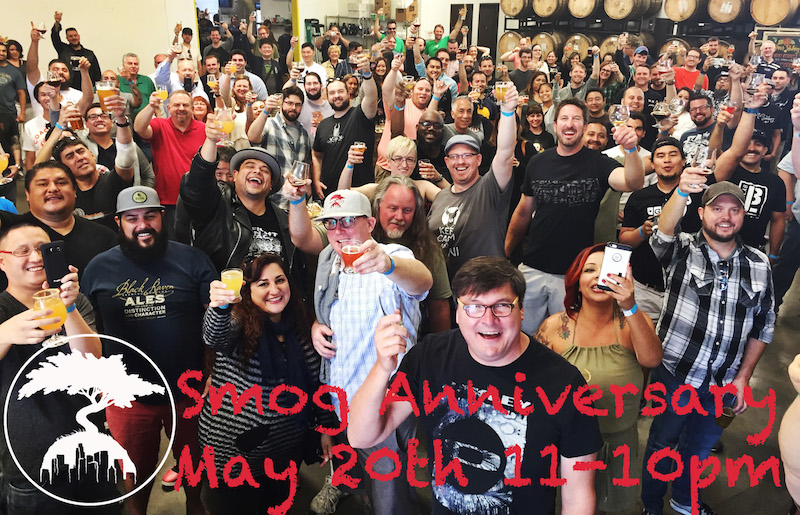 This is an event you don’t want to miss. Smog City is well-known for their diversity of releases, from core brands like Sabre-Toothed Squirrel and Coffee Porter to the more esoteric, This Sour Future, Bourbon O.E., Infinite Wishes, ChipShot and My Tai HopT- their portfolio is comprehensive to say the least. This event will be no exception as their dig through the cellar to pull our fan favorites for this special day.

Smog City is well-known for their creative and festive taproom events and this one is no exception. Come for the VIP Session from 11-1pm (tickets required) or catch the follow of the General Admission from 1pm-10pm- either works, both are good…both get you great beer!!

Early entry with 200 of your closest friends and beer nerds

Music stylings by the Mood Maestros

If you can’t make this event, mark your calendars for June 18th, Smog’s bi-annual Rarest of the Rare event returns this year for LA Beer Week(June 17-23rd) Rarest of the Rare is the largest single offering of Smog created Bourbon barrel-aged, sour beers, and wild experimental beers available. June 18th 11-9pm @ the Smog Taproom and Brewery.