Product description: Science Fiction (6.9%) began as a six gallon experiment back in 2013, our Barrel Master’s first foray into the mystical ether of sour beer. Since then, we’ve refined this Funky Blonde Ale, melding our Belgian Extra Pale Ale Fiction with a Roeselare blend and allowing it to work its magic for 20 months in our basement. 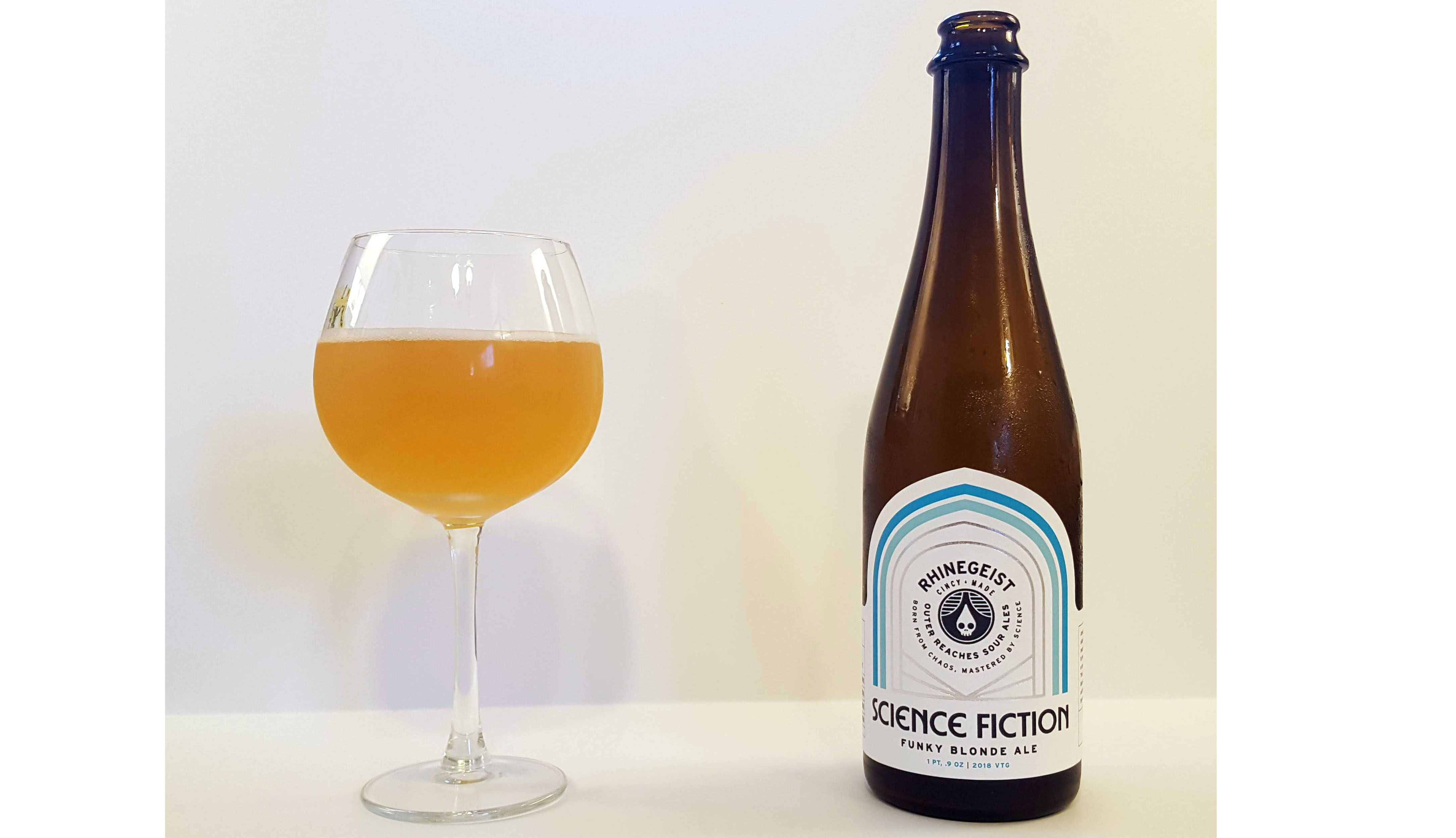 Science Fiction marks the first beer I’ve had from Rhinegeist (Cincinnati, OH), which translates to “Ghost of the Rhine” in German. Just taking this beer out of the fridge I’m already impressed. Science Fiction is beautifully presented inside and out. For the packaging, you get an upscale 500mL punted bottle with cork and cage. (The cork was quite difficult to pull out, which may be a good thing.) On the label, Science Fiction has the same design language as the other wild ales in Rhinegeist’s Outer Reaches series, which includes Infinite Dawn sour blonde and Metaphysical Mango fruited sour ale. The graphic design is top notch.

Once the cork is pried out of the bottle, there’s a mild pop and no gushing all over the place thankfully. Into lambic stemware, Science Fiction is a lighter, glowing gold in color with moderate haziness. White, fizzy foam erupts but then settles to a thin layer within 30 seconds, which is typical for sour/wild ales in my experience.

Dive in and this beer is immediately in-your-face pungent with all of the trademarks of a barrel aged sour blonde ale. There’s tons of barrel character like buttery oak and oaked chardonnay. Huge salt spray comes through from a possible acetic acid/vinegar character, which is fine in small quantities in sour ale. Past all of that is a nice pink lemonade character. It’s an exciting aroma that checks all of the boxes for this style. Flavor-wise, you get pretty much everything I mentioned in the nose. It’s funny, but this beer comes with a little infographic of the “levels” of fruit, funk, wood, and sour. See the image below.

Using the label above as a guide, Rhiengeist has fruitiness rated at 0.5/6, funk at 4/6, wood at 0/6, and sour at 2/6. I disagree with parts of the graphic here. This beer is both incredibly fruity and also hugely driven by wood. Oaked chardonnay is the primary flavor here with loads of buttery oak and vanillin. You get heaps of barrel character to the point where it starts to remind me of bourbon. (It was aged for 20 months.) Fruitiness manifests itself as ripe peach flavors, which are accentuated by prominent saltiness from the acetic acid and also a nice dose of residual sugar. I would give overall acidity a 6/10, which I would say is still “mild” for a barrel-aged sour blonde but higher than what the bottle suggests. Acetic acid is present, but it doesn’t ruin anything for me as it is coupled with excellent lactic and citric acids. Sweetness is really where this beer shines. Whereas other sours are super dry and just dead in the palate, Science Fiction is rich and relatively full-bodied for this style with enough sugar to let the flavors pop. Likewise, the mouthfeel is oily and coating with rich barrel flavors carrying on into the finish. Carbonation remains effervescent throughout, which helps cut through some of the oiliness and help the beer dance around in the mouth.

Though Science Fiction is touted as a funky blonde ale, which could be construed as a Brett-driven, low-acid wild ale; I think this is a full-on sour blonde ale with major complexities from prolonged barrel aging. There’s an amazing oaked white wine flavor to this beer coupled with an excellent balance of sugar and acid. My favorite aspect is its full body and ability to create a juicy peach beer without any fruit additions. In my opinion, it’s a masterpiece.