(Cincinnati, OH) — Cincinnati-based Rhinegeist Brewery is proud to introduce Outer Reaches Sour Ales, a new, delicious lineup of Brett Culture, Mixed Culture and Fruited/Cuvée Sour suds light-years in the making. The first handful of brews will emerge from the ether over the next few months, starting with Infinite Dawn, a Sour Blonde Ale releasing this Friday, April 6th, at 3pm in the Rhinegeist taproom. Each beer in the Outer Reaches series will be available in 500ml bottles in very limited quantities in Ohio, Kentucky, Massachusetts, Indiana & Pittsburgh, PA. 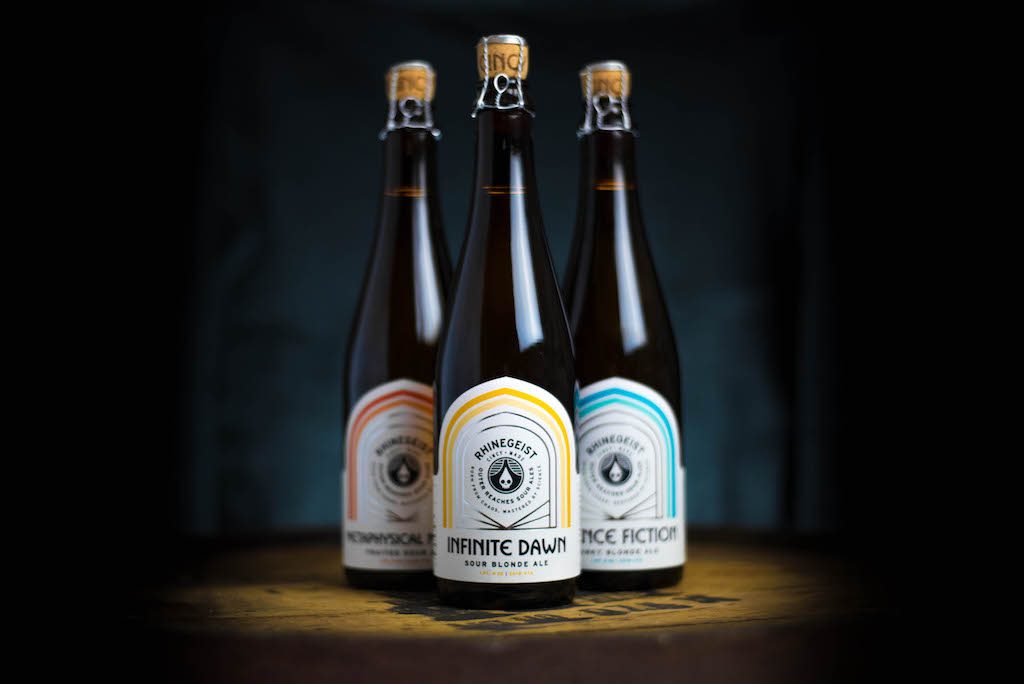 “When we got rolling here at Rhinegeist, we knew that experimentation would be one of our chief personality traits,” said Rhinegeist co-founder Bryant Goulding. “We wanted to explore all angles of beer — hoppy, malty, Belgian and, ultimately, sour.”

“With that first batch” said Cole, “we knew we had a little something.”

Cole’s early creations were promising, but lacked the finesse and elegance paramount in the industry’s most respected sours. For Goulding, that meant there was more work to be done.

“Sour beers are complex,” said Goulding. “We knew we wouldn’t just launch them at a certain point in time, but more so when they told us that they were ready. I remember that first batch that Luke brought up. We drank it up against some of our favorite sours and determined that it was probably an intensity level of two out of ten. But a good start — we knew we were onto something.”
Over the next few years, Cole continued to experiment in bursts, sourcing yeast strains, refining recipes, tasting batches, and tackling quality challenges with Rhinegeist’s lab team. Improvements came quickly.

“Time is everything and perfection can’t be rushed,” said Jim Matt, Rhinegeist’s Chief Science Officer. “Aged sours produce a mélange of flavors, kind of like a pot of sauce sitting over a simmer. You taste those individual components then, after awhile, they emerge together into something that’s really wonderful.”

In 2017, a program started to take shape. Thematically, the sour making process took on an element of otherworldliness for the Rhinegeist team — each recipe, each brew, each sip was one part of a long, riveting and mysterious trip to a faraway destination. Enter: Outer Reaches.

Logistically, that delicious destination has three components: Brett Culture, Mixed Culture, and Fruited/Cuvée Sours. Each category and the beers in it will explore the wide range of flavors and aromas present in sour beers.

“These beers push the boundaries of flavor and expectation,” said Goulding. “You’ll find brightness, acidity, fruit, funk and exceeding layers of personality. We’re making an intentional departure from predictable brewing into the deeper realms of creation and exploration. We are very excited to bring these beers up out of the basement and into the light.”

For more info, visit http://www.rhinegeist.com/outerreaches.
Got questions? Hit us up on social media @rhinegeist.