Product description: Stone Idolatrous IPA represents the elevated state of reverence that Stone extols for the venerable and almighty Hop. El Dorado & Mosaic hops have been anointed to bestow their divine qualities on this sacred brew. This limited release is part of Stone’s Hop Worship Seasonal IPA Series…Glory be to those who imbibe it in its freshest form…and faithfully worship thy Hop in the beauty of blissful bitterness. 7% ABV, 75 IBUs. 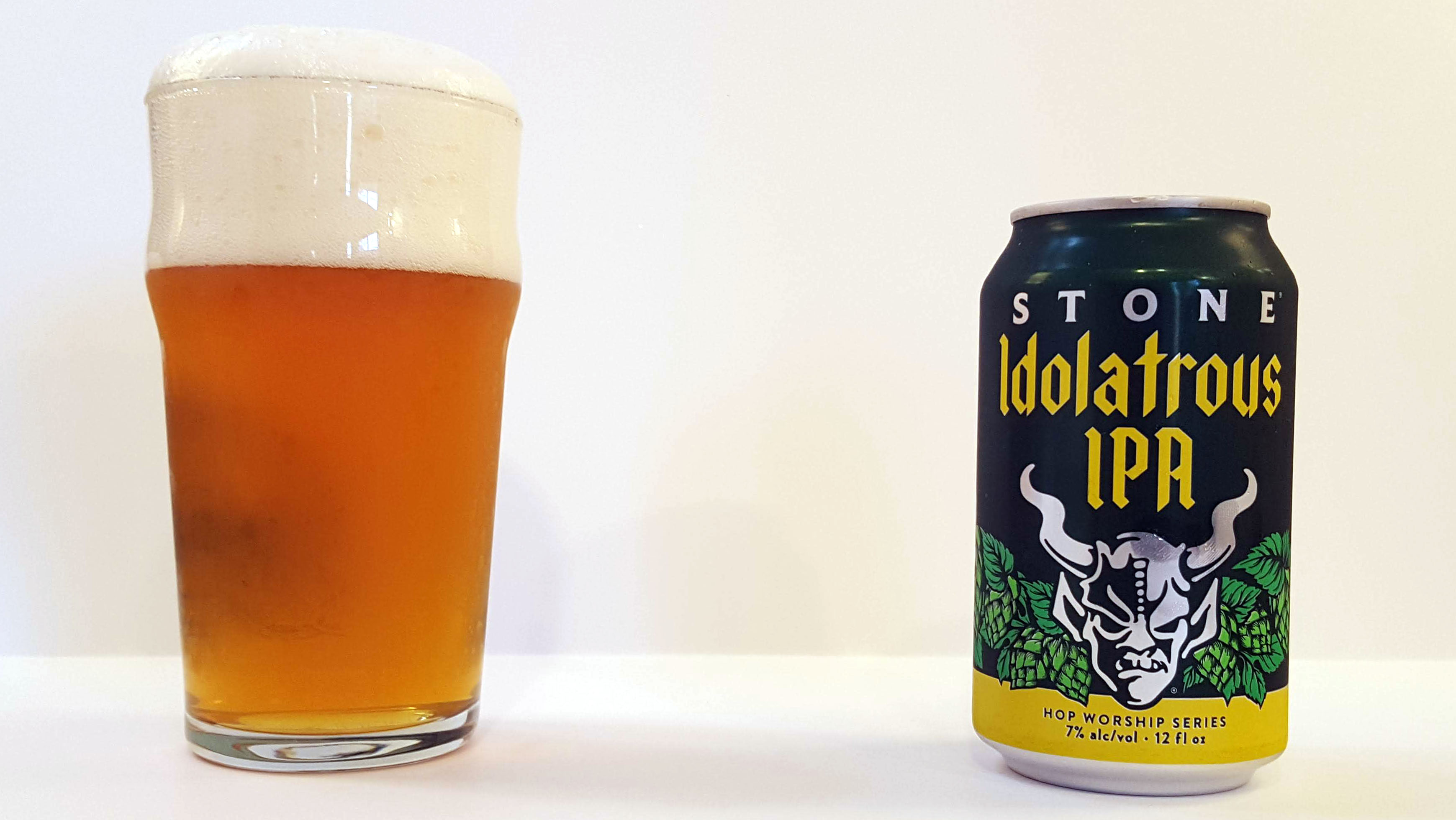 I’m reviewing Idolatrous from a 6-pack of 12oz cans picked up at my local grocery store for $9.99. Though it took some tossing and turning, I eventually found the packaging date on the outside carton. It reads 6/12/18, so this batch is about 6 weeks old. On the bottom of the cans, you get the packaging date again as well as a Best By date of 10/10/18. So Stone has given this beer a 120-day freshness window. I then sampled the beers over the course of the week to get the fullest experience possible.

Here’s what I expected from Idolatrous: a modern, clear, clean IPA that brought forth all of the beautiful fruity characteristics we love from Mosaic hops and maybe some weird stuff I’m not yet used to with El Dorado hops. (Quick research suggests that El Dorado is a higher alpha acid hop.) I loved the first beer in Stone’s Hop Worship series, Exalted IPA, and wrote earlier this year that Exalted was an IPA for hopheads. It was aggressive and gave you that big hop fix for those that care less about delicacy and more about kettle hop bitterness. Since Exalted already hit a home run on that front, I wanted to see Stone take this series to a new place. Stone has pushed the envelope previously with Tangerine Express and Vengeful Spirit, two of my favorite beers from last year. So it isn’t unreasonable to see this beer take a clean, brighter IPA stance.

Cracking open the can, Idolatrous is clear amber in color and it generates one of the most impressive heads of foam I’ve ever seen on a beer thanks to gratuitous hop oils in solution no doubt. An ice cream scoop of foam rises out of the glass and doesn’t spill over edge thanks to an impressive meringue-like consistency (see photo above).

Dive in for the aroma and the delicate fruity touches of Mosaic are absent. Instead, there’s a lot of citrus peel like white grapefruit, lemon, and lime. As it warms up, cake and bread rolls come through as the volatile hop aromas dissipate. Flavor-wise, Idolatrous is huge on bitterness with what I assume are the El Dorado hops working at full capacity for that high IBU wallop. A lot of what I wrote previously about Exalted IPA is directly relevant here, as my assumption is that the base beer is wholly unchanged while the hops have just been subbed for different varieties.

Idolatrous is an old-school IPA at its core with huge resinous hops dominating every facet. It’s a burly beer with a chewier, medium to almost heavy body built on toasted bread, pine sap, walnuts, and pound cake. Bitterness is easily a 9 out of 10 approaching tannic tea leaf flavors while sweetness seems on par with Exalted at a 4 out of 10. That places the beer off-balance and in the aggressively hop forward category, which may be a good thing for die-hard Stone fans that have come to expect that from such beer as Stone’s flagship IPA.

Despite the hefty bitterness, Idolatrous is enjoyable and drinkable with a silky, caramel-laden mouthfeel that gives your palate much needed respite from the resin overload. It is anything but modern and “subtlety” is not in its vocabulary. Just like with Exalted, this series continues to show that there is still a place for the old-school, chewy, ultra bitter, amber IPA. Though my overall feeling towards this beer is “meh” compared to my previous fascination with Exalted IPA, I found that I would reach into the fridge to grab Idolatrous without hesitation. It’s a predictable fix for us hopheads and takes me back in time to 2008 when there were few beers on the shelf as bitter as Stone’s latest concoction.

For lovers of big bitterness, Idolatrous is a safe bet. For lovers of what we have come to expect from clear Mosaic IPAs, Idolatrous stomps on that finesse and drowns it out with the heavier alpha acid punch of El Dorado.