(ATLANTA,GA)– Springtime in the South means three things: baseball, shooting the Hooch and SweetWater 420 Fest. With 420 Fest returning for its 11th year this April, the brewery is rolling out a perfect addition to any outdoor activity – 420 Fest Double IPA. 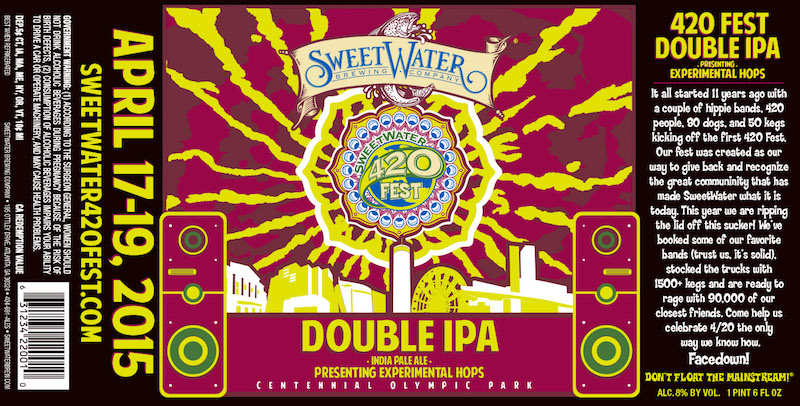 The newest beer to the Dank Tank line is brewed with 100-percent Marris Otter grain for a clean, malty finish. Turning up the funk on this brew, SweetWater worked with the Hopsteiner Breeding Program in Yakima Washington to throw in two new varieties of experimental hops – Eureka™ and Lemondrop™. Eureka™ yields a blend of black currants, dark fruit, strong herbal notes, pine tree, mint, grapefruit rind, citrus, and tangerine; while Lemondrop™ gives off lemon, citrus, orange, grapefruit, and “Amarillo-like” notes.

Brewed full in body to balance out the high hop bitterness, this beautiful blend shakes a leg at 8-percent ABV. Brewers used more than 460-pounds of hops (nearly 2-pounds per barrel) for this bomber beauty, ringing in at 85 IBUs. The limited-run brew is guaranteed to help 420 Fest fans get a little weird at Centennial Olympic Park this April, and serve as a springtime sipper all season long.

“With the biggest and most bad-ass 420 Fest on the books, we knew this larger-than-life event needed its own brew this year,” said SweetWater Minister of Propaganda Steve Farace. “The only thing better than a brand-new Dank Tank is one with experimental hops. Like the opportunity to experience and enjoy great new music, these hops push the boundaries on what we are able to create. Can’t wait to raise several of these with a few thousand of our closest friends at 420 Fest!”

The 420 Fest Double IPA will be available on tap and in cold boxes in 22-oz bombers beginning the week of April 6. The beer will be stocked throughout most of SweetWater’s Southeastern footprint.

ABOUT SWEETWATER BREWING COMPANY: SweetWater Brewing Company is an Atlanta-based craft brewery living by the motto “Don’t Float the Mainstream!” The award-winning lineup of year-round beers includes SweetWater 420, IPA, Blue, Take Two Pils, and Georgia Brown. SweetWater also features a catch and release series of beers available on a limited basis throughout the year, and an experimental, one-time-only Dank Tank series. SweetWater Brewery – located at 195 Ottley Drive in Atlanta – is open for tours every Wednesday, Thursday, and Friday from 5:30-7:30 p.m., as well as Saturdays and Sundays from 2:30 – 4:30 p.m. For more information about SweetWater Brewing Company, please visit www.sweetwaterbrewing.com. Hang out with your social thang out and follow SweetWater Brewing Company on Twitter/ Instagram @sweetwaterbrew, or become a fan on Facebook at facebook.com/sweetwaterbrew.