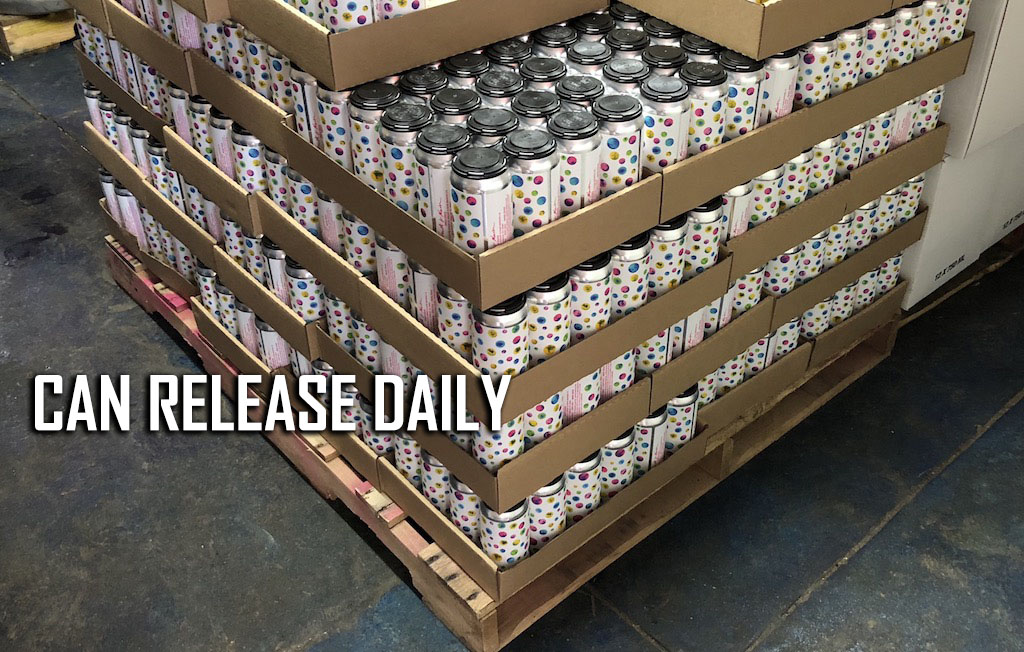 We are back with the latest edition of Can Release Daily. Every day, around the world, small breweries are offering some of the freshest, most innovative beers right out of their tasting rooms. With so many breweries releasing so many brightly labeled beers, it’s hard to keep track of it all. Because we love centralized info, we decided to bring you the latest releases in this post. Check out can releases from The Veil, Fort George, Commonwealth, LA Ale Works, Burlington Beer, Local Craft Beer (LCB), New Glory Brewing, La Cumbre Brewing, Equilibrium Brewery, Modern Times, LIC Beer Project and Magnify Brewing,

Some exciting news to start the week: Fort George is set to release a new 16-ounce four-pack. Cathedral Tree is brewed into oak puncheons where it spends a few months lagering in the Lovell basement. It pours bright gold with a light fruit & grape on the nose. And just like the Cathedral Tree it is named after, this barrel fermented Pilsner is exclusive to the coast. . Grab a pint or cans to-go starting Friday, May 17th at Fort George, along the NW coast of Oregon and SW coast of Washington soon after. #CathedralTreeTrail #BarrelFermented #PuncheonPilsner #OakLagering #CraftCans #Local @fortgeorgedistribution. Photo by @tristanpaiige. Can art by @wwilleelias

You’re not crazy 😜 Ferm was a little slower on this one. Re-announcing TINTA BLANCA White Sangria Style Gose with Peaches 🍑, Lemons 🍋, Limes and Apricots conditioned on French Oak! This 5% crusher drops Wednesday in the taproom on draft and in cans for carryout. . . #gose #sangria #whitesangria #beer #craftbeer #instabeer #beerstagram #beergasm #va #virginiabeach

A post shared by Commonwealth Brewing Co (@commonwealthbrewco) on May 6, 2019 at 6:25am PDT

You’ve asked, and asked, and we’re delighted to deliver — Mass Rising is back! Our hop-heavy favorite makes its return this Friday, 5/10, at the Beer Hall. Mass Rising is a fruity double IPL brewed to redefine what a lager can be. We infuse this beer with increasing amounts of American hops multiple times during the brewing process to maximize flavor and challenge expectation. This is a super small batch, so cans and draft will only be available at our brewery. See you in for a round! #drinklager

A few weeks back the Ladies of LAAW got together to design a special beer for Mother’s Day. Shoulder Pads (7.5%) is a juicy IPA double dry hopped with the exclusive @yakimachief @pinkbootssociety hop blend. . This easy drinking juice bomb will be released on Sunday, May 12th. We’ll have a @rootedharmony succulent workshop at 2pm, photo booth, beermosas, beerllinis, @blackflourcrepes, treats and a special surprise from @lhim_inc. . Stay tuned for more details on the beer and event. Big thanks to @girlswholikebeer for the killer design! . . . #shoulderpads #juicyipa #pinkboots #loral #glacier #mosiac #sabro #simcoe #canrelease #mothersday #succulents #photobooth #food #funforall #independentbeer #labeer #labrewers #hawthorne

Miss out on all the fun of Beer Week? We’ve still got a pretty RAD selection of beers in our fridge for your take home pleasure. Some cans are getting dangerously low on inventory. See you soon!⁣ ⁣ #loadedfridge #canfridge #whosready #craftbeer #sacramento #granitebay #newglorybeer #newglorycraftbrewery

Time to start dreaming of Strawberry Gose. Cans and draft will be available this Friday at our taprooms 😍 #craftbeer #🍓 #nmbeer

Thank you @eviltwinbrewing, @himmerigetdk and @brasseriecantillonofficiel for welcoming us to be part of what’s is being affectionately called Team Blåbær or this fun and exciting day. ‪On Blåbær day, Thursday 5/09 at 4 PM, at the brewery, we are happy to make our April Fools ‘Joke’ a reality by bringing you our collaboration with @eviltwinbrewingnyc, Blueberry Boy (11.0% TIPA). $22 per four pack, limit 1 case of each beer, per person. Limit subject to change.‬ ⠀⠀⠀⠀⠀⠀⠀⠀⠀ ‪Blueberry Boy is the first beer of its kind to come out of Equilibrium. It’s an idea we came up with during a visit with Jeppe, found it hilarious, and felt it was the perfect way for hopheads to celebrate the annual Blåbær release on home turf. This TIPA was aggressively hopped with Mosaic and Belma, and conditioned on blueberries with a touch of lactose. Blueberry Boy pours a vivid fuschia color and has an aroma of fruity citrus, blueberry skin and an earthy minerality. The flavor is citrus, blueberry flesh and earth and even finishes with our EQ juice. The body of this beer flows freely and makes it extremely crushable for a fruited triple. It has a pointed bitterness but a very smooth finish and the blueberry is the last thing you taste as you go in for another sip‬. ⠀⠀⠀⠀⠀⠀⠀⠀⠀ Tickets start and taps open at Noon in our taproom. For the occasion, we will also have vintage bottles of TABA Blueberry for on-site consumption. Lastly, If you’re in Copenhagen, Himmeriget will also have cans to go during the Blåbær release on 5/9 along with a bunch of Equilibrium beer on tap for the big day. Keep an eye out, we’ll be there hanging out!

ON SALE 5/11: Unlike Birds, This Is Real. A roaringly successful collab with our homies at @otherhalfnyc, this DIPA was loaded with shockingly massive amounts of Citra hops, plus an extremely generous dose of Nelson and Cashmere. At 8.4%, drinking it is roughly approximate to getting launched out of a cannon through a grove of fragrant citrus and landing in a pile of ripe stone fruit and mango. These seriously dope beer-filled vessels will be yours for the taking starting at 10AM on 5/11. For all the online sale info, be sure you’re subscribed to our email newsletter.

Tomorrow, Tuesday (5/7) we will have the following beers available in cans and on draft: One Thousand Percent is an 8% DDH Imperial IPA. Hopped with a ton of citrus forward hops including Citra, Amarillo, Centennial, Summit and locally grown New York State Cascade that has notes of mango. $18 per 4 pack, 1 case limit. Better Late Than Never is an 8.4% IIPA brewed with lactose. Double Dry Hopped to the brim with Citra, Belma, Azacca and Simco Cryo. Sometimes it’s better to show up late than not at all. $18 per 4 pack, 1 case limit. Funny Business is a 4.5% IPA brewed to be enjoyed outside under the sun. It is highly crushable and low ABV to keep you out of trouble, but still packed with hops. Dry Hopped with Azacca, Amarillo, Hallertau Blanc and Centennial. $13 per 4 pack, 1 case limit.