(PORTLAND, OR) – Cascade Brewing has announced the upcoming release of Bean-to-Barrel Triple, a collaboration project with Danish brewery Mikkeller. The Northwest sour ale will be released on Friday, May 10, and will be available in 500ml bottles and on draft at Cascade’s two Portland pubs and through limited distribution. Bean-to-Barrel will also make its European debut on draft that same day at the Mikkeller Beer Celebration Copenhagen (MBCC) in Denmark. 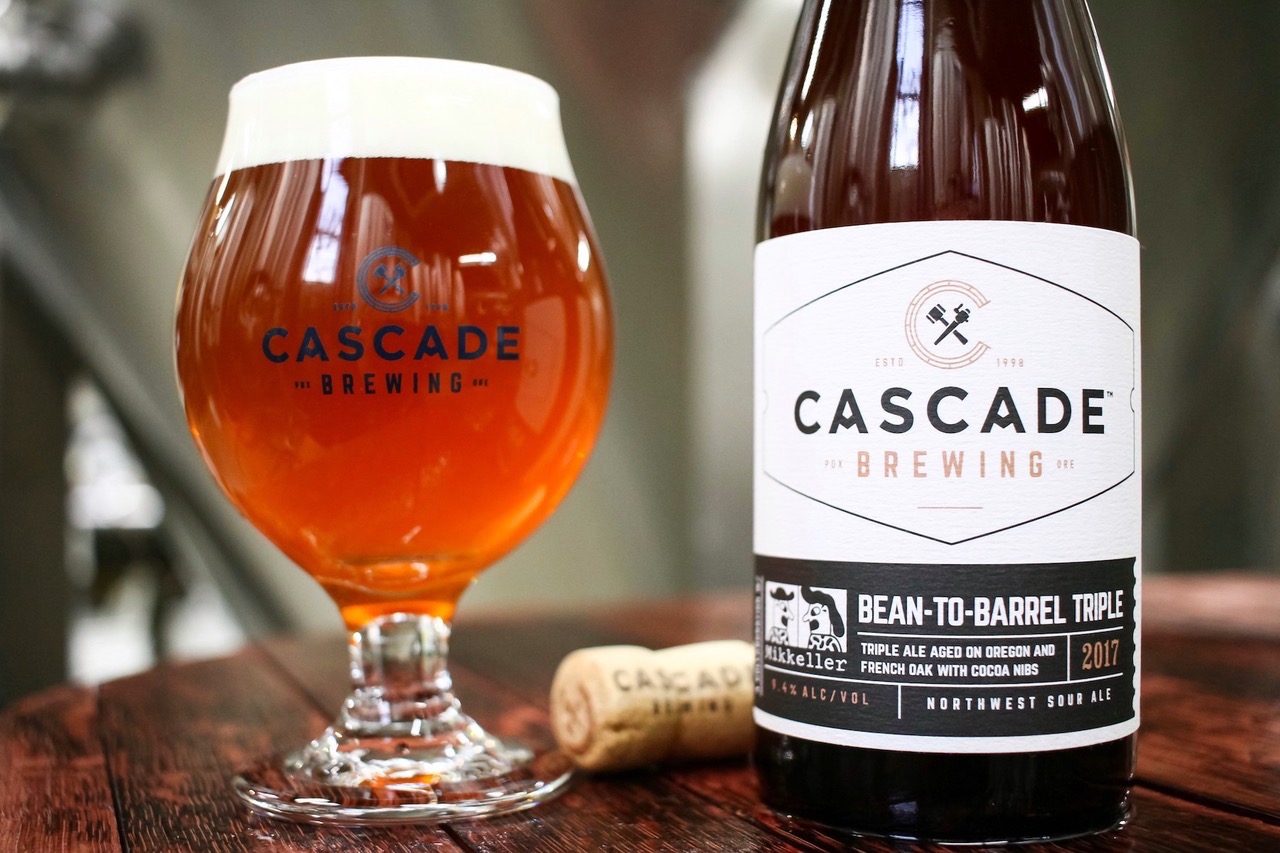 “We’ve had the great privilege to work with many amazing, cutting edge breweries on collaborative efforts in the past. Needless to say we jumped at the opportunity to work with Mikkeller, long considered to be an innovative force that pushes the boundaries of existing beer styles with intense flavor and ingredient combinations,” explained Norm Stokes, Cascade Brewing Cellar Manager. “Bean-to-Barrel Triple was born of this collaboration, and it was a memorable experience to work together to come up with a beer that incorporates the complexity of Oregon oak with the rich flavor of cocoa nibs sourced from Bean Geeks chocolate.”

The collaboration was conceived during a visit by Mikkeller in September 2018; Stokes and Kevin Martin, Cascade Brewing Director of Operations, met with Keith Shore, Jacob Gram Alsing, and Mikkel Borg Bjergsø of Mikkeller. Blended from triples aged on oak since 2017, Bean-to-Barrel Triple comes in at 9.4% ABV.

It was announced last week that Mikkeller is opening a pop-up pub in Northwest Portland in June at the former Burnside Brewing Co. space, located just blocks from Cascade Brewing. That’s welcome news to Cascade; according to Martin, “With their reputation for collaboration and innovation, Mikkeller’s presence here in Portland will undoubtedly elevate our ever growing and evolving craft beer scene.”

About Cascade Brewing
Cascade Brewing has been a pioneer in the sour beer renaissance since 2006 and the proud innovator of the Northwest Sour Ale. Its distinctive sour beer blends feature fruit forward, barrel-aged ales with an emphasis on project year-to-year variation. These beers offer a complex array of flavors derived from the acid, the fruit and the residual flavors present in the barrels in which they age. The resulting beers offer a complex array of flavors and aromas derived from with each project year release capturing the unique subtleties of that year’s growing season. Cascade Brewing’s sour ales are brewed and blended in Portland, Oregon. For more information, visit CascadeBrewing.com and engage on social media at @CascadeBrewing. Cheers to the sours; enjoy in a profoundly wise manner.