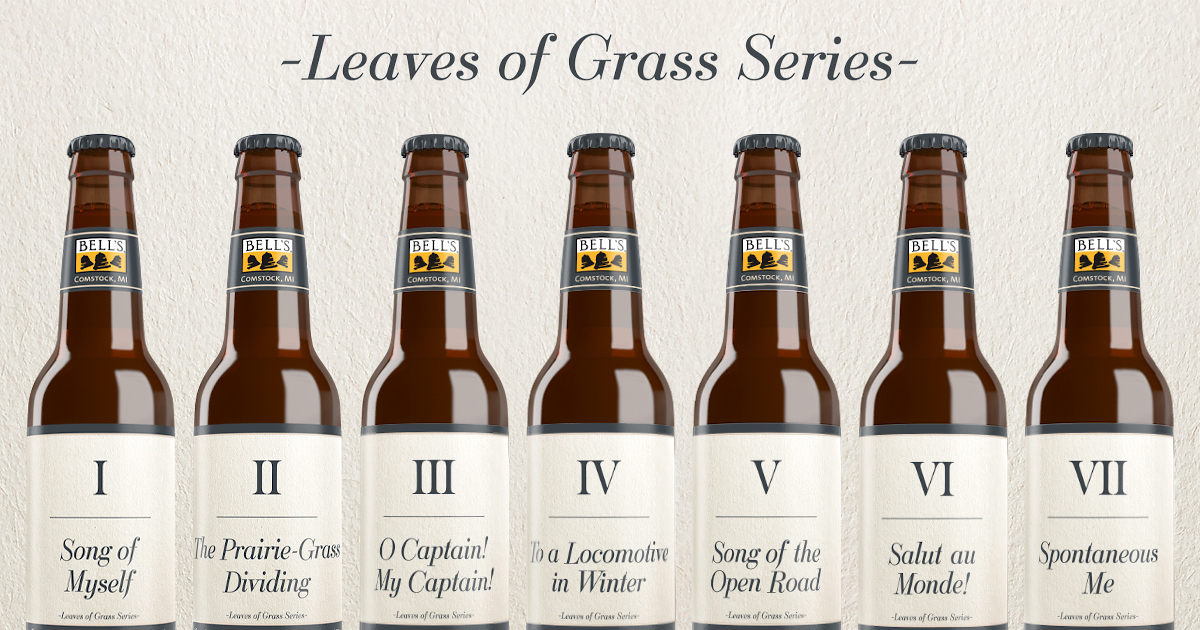 The series will kick-off in late May 2019 with a German-inspired American IPA and conclude in May 2020. Each specialty beer will be limited and available on draft and in 12 oz. bottles, packaged in 6-packs.

Bell’s Leaves of Grass series is a celebration of Walt Whitman’s literary classic and one of Larry Bell’s favorites, “Leaves of Grass.” First published in 1855, Whitman’s book of poetry is a hallmark of American literature.

“Over the years, we’ve drawn inspiration from a variety of different sources from music to literature to the Great Lakes,” said Larry Bell, President and Founder of Bell’s Brewery. “This series is just the latest example of how the arts have inspired us to create new and innovative recipes.”

Each new beer will be named after and inspired by one of Whitman’s poems, while each recipe will complement the seasonality of when each beer is released.

The release timing of the first beer does also coincide with Whitman’s 200th birthday.

Bell’s Planets Series, which debuted in 2014 and also featured seven brand new beers, celebrated another one of Larry Bell’s many passions, music. Inspired by Gustav Holst’s “The Planets,” the release included fan favorites such as Mars, a Double IPA that has since been re-released after The Planets concluded. Leaves of Grass picks up and continues the success of that series.

LEAVES OF GRASS SERIES AT A GLANCE

SERIES OF BELL’S PAST

Late 1990s: 10 Stouts of November (original inspiration for Bell’s annual All Stouts Day celebration in November at its Eccentric Cafe).

Bell’s Brewery, Inc. began in 1985 with a quest for better beer and a 15 gallon soup kettle. Since then, we’ve grown into a regional craft brewery that employs more than 550 people over a 39 state area, in addition to Puerto Rico and Washington DC. The dedication to brewing flavorful, unfiltered, quality craft beers that started in 1985 is still with us today. We currently brew over 20 beers for distribution as well as many other small batch beers that are served at our pub in Kalamazoo, the Eccentric Cafe. Our ongoing goal is to brew thoughtfully, creatively and artistically. 100% family-owned and independent, we strive to bring an authentic and pleasant experience to all of our customers through our unique ales and lagers. For more information, please visit bellsbeer.com.