Interview With James Watt Of BrewDog 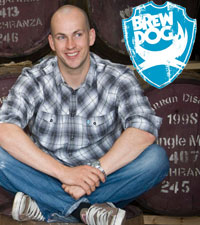 In a sea of traditional, session ale in the United Kingdom, comes BrewDog out of Scotland. Rather than another brewery making boring milds, bitters and brown ales, BrewDog has taken a fresh approach of making bold beers with a bold persona.

We discuss many topics of interest with BrewDog Co-Founder James Watt, including exporting to the United States, working with Stone Brewing, as well as experimental barrel aged brewing methods. Enjoy!

1- Now brewing commercially for over 2 and a half years, how do you like being part of the Craft Beer Revolution?

We love it. Although it has to be said the revolution is much slower in the UK than on your side of the Atlantic. We were inspired by the American Craft Beer revolution and wanted to take some of the spirit of excitement and innovation into the UK beer scene. Martin and I could not find any beers we liked in the UK and decided the best way to remedy this was to brew our own.

The UK beer scene is stuffy, sleepy traditional and boring. Pretty much all the small UK brewers make the same boring 4% ales with the same boring hops and then package them in a folksy, old-fashioned manner. I blame Camra for single-handedly holding back innovation in British brewing by focusing too much emphasis on too few beer styles. We want to put that right and make craft beers edgy, exciting and cool in the UK. We are on a mission to make other young people as passionate as we are about bold, full-flavour craft brewed ales. 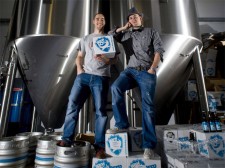 3- We see you have forged a great business relationship with Stone Brewing here in the States, through collaborative efforts. Could you go into detail as to what arrangements you have presently and in the future with Stone?

Our relationship with Stone is awesome and very humbling for us. They are our heroes and one of the main reasons we started brewing. What they have achieved and particularly the manner in which they have done it really resonated with us. Going to Stone Brewing to make a collaboration beer was like playing on stage with your favourite band. To be able to do amazing things like this only 2 years into our BrewDog journey was amazing. Stone also came and visited us in Scotland and we brewed a hardcore beer here too. The next chapter is a brewer exchange. Stewart Bowman just left today for California – more info

4- Sad but true, people do judge a book by its cover. It appears BrewDog has the same flamboyant presence as US Breweries Southern Tier and Stone, with respect to the bottle labels and “in your face” marketing. Who at BrewDog is responsible for this, and what your thoughts on it?

I do all the marketing at BrewDog. I am responsible for all the packaging, design and copy-writing. In addition I handle all the online bits and pieces that we do. Our branding and marketing is very revolutionary for the UK where other beer brands would put your grandparents to sleep.

Our marketing strategy has always involved shortening the distance as much as possible between ourselves and the people who drink our beers. Our latest project is Equity for Punks and is the ultimate incarnation of this philosophy. Via www.equityforpunks.com we are selling 10% of our company to the people who enjoy our beers.

5- Amongst the craft beer enthusiasts community, it has been echoed that A) The BrewDog products sent to the US are at an undesirable price point ($12.00 US for 12 oz. of your high gravity offerings) and ($10 US for 22 oz. bottles of session beer). And B) Because of the bad economy coupled with the high price point that people are purchasing the beer past its prime (once the price is reduced for quick sale) and not giving BrewDog the nod it deserves. Would you care to address both the price and freshness concerns?

What people have to realize is that we are only 24 months old as a company, and only have 24 months experience in this unforgiving industry. We are far from the finished, polished article. We are a little raw, a little rough round the edges and a bit naive sometimes. However we are also real, honest and completely committed to making the best beer we can. We are aware of things we can do better and we are working as hard as we possibly can to make sure we do so. We realize we messed up badly on many levels when we started exporting to the US market, however we have also been working really hard to put this right.

We began exporting to the US when we were only 5 months old as a brewery: our production was tiny at the time. We had no economies of scale or efficiencies in our small operation. We had to charge a premium just to ensure we covered our costs. Compounding this, we had no knowledge of the US market and how the 3-tier distribution system worked and how this affected end price. Furthermore the exchange rate was very unkind initially. All of this meant our beer was ridiculously expensive on the shelves in the US, I almost choked on my first visit when I saw Punk IPA at $13.99. This was in stark contrast to the irreverence of our branding and where we want out product to sit. With the recent price changes all our bombers should be in the $5.99-$6.99 range.

We also had some issues initially with our beers not travelling as well as we would have liked them to. The beer gets pretty hot en route which we found out the hard way. The heat the beer was exposed to during shipping may have resulted in a hastening of ageing. All of this meant that people in the US did not get to see our beers at their best. Now we only ship in fully chilled and insulated containers and store in chilled warehouses. We have invested in a new bottling line which double pre-evacuates the bottles to ensure there is not oxygen left in there.

We also found out the hard way that people in the US expect much more carbonisation in their beers than people in the UK. Most of the beers we sent initially were pretty much flat by American standards. This is something we have also recently addressed. In addition our beers are no longer sterile filtered, we had thought this was the only way to get the shelf-life we needed for export. However the process also striped a lot of flavour and mouth-feel from our beers. From travelling and meeting other brewers we have now implemented a much lighter filtration process which adds a lot to our beers.

It has been a pretty steep learning curve for us in the US market, we are doing all we can to ensure our beers arrive in great condition and are reasonably priced. We are just a young brewery and learning all the time. Improving absolutely every single aspect of everything we do will always be all we are focused on. We have some pretty exciting plans for the rest 2009 and we hope you all want to be part of them.

6- BrewDog has been making great use of oak barrels to age ale. Is there a particular type of spirit soaked wood barrel you would like to work with that you haven’t tried yet?

We love ageing beer in oak barrels. We have also done something pretty special with a tiny part of the collaboration beer we brewed with Stone. See this short clip for more details

We are now playing about with ageing beer in Scotch whisky casks with fruit. Islay Casks are a lot of fun. We use these for our Paradox Smokehead and the result is a rollercoaster of a beer! For us, what would be pretty interesting would be to reverse the process, so to finish a Scotch Single Malt whisky in a cask which had previously aged our beer.

7- While BrewDog is still in its infancy, have you been approached by any European juggernauts like InBev, Guinness, or Heineken to be a part of their portfolio of brands?

No not yet. We are pretty clear on our vision for BrewDog and it certainly does not involve any partnerships with the big bad corporate brewers.

8- Please give us your point of view on Scotch Ale. Some say the high gravity malt bombs did not originate from Scotland, to me it doesn’t matter as its real good. Does BrewDog plan on making a WeeHeavy/Scotch ale?

I love Scotch Ales and we do intend to make one soon. However as with everything we do it will have a little twist. We have just prepared a recipe for a spiced Imperial Scotch Ale which will be aged in some Scotch single malt whisky casks.

9- Where do you see BrewDog at their 5th year mark?

That is a tough question. We are only 2 and a half years old and things have moved so fast for us. I do not really care where we are when we reach our 5th year mark as long as we are still doing everything we can to make great beers and trying to make other people share our passion for amazing craft brewed ales. It is pretty tough in the UK sometimes being as radical as we are in our approach, however we are completely dedicated to educating the UK drinkers and firmly elevating the status of beer in our country.

10- What is your favorite non-BrewDog craft beer?