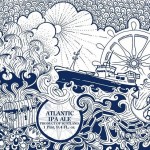 James Watt, BrewDog’s Head of Stuff, said “Today the term IPA has lost its meaning and UK brewers mainly use it to describe beers which are neither particularly hoppy or high in alcohol, Duecher’s IPA at 3.8% being a prime example of the complete butchering of the style. It’s sad to see the great IPA heritage in this country come to stand for nothing more than a sparingly hopped low ABV blonde session ale. “We wanted to take the style back to its roots and we have created the first genuine, commercially available IPA for 2 centuries. Going beyond the realms of what would normally be deemed possible in order to deliver is what we’re all about at Brew Dog. We’re constantly pushing ourselves to come up with audacious, unusual and cool concepts and Atlantic IPA is definitely the most ambitious brew project we’ve accomplished to date.”

Aroma: A strong whiff of earthy Euro hops and an equal sized amount of sweet and spicy malts.

Taste: Starts with a subtle bitterness, followed by a moderate amount of caramel malts and a layer of roasty chocolate notes.

Overall: To date, the best BrewDog beer I have had. I enjoyed the character the beer had in its appearance and taste.  I’d love a bomber or 6 pack of this stuff, hopefully BrewDog can ramp up production on this.