“I’m a beer drinker,” said Smith, who together with a team of Oskar Blues brewers created a light-bodied, heavily-hopped West Coast-style White IPA featuring Centennial, Simcoe, and Galaxy hops. “I mostly drink IPAs, that’s why I wanted to create something light but hoppy. As a beer drinker, that’s what I’m drawn to.” 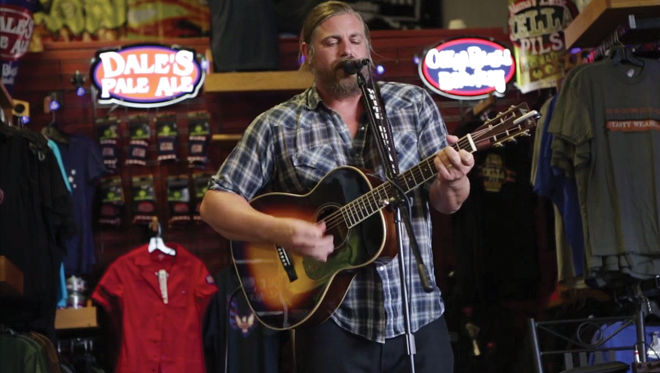 Fans of both The White Buffalo and Oskar Blues can stop by the brewery’s website for a FREE exclusive download of “Don’t You Want It” from the Buffalo’s latest album. Fans can also check out behind-the-scenes footage from Smith’s brew day in August, which ended with a surprise performance at the Tasty Weasel tap room.  Check out the behind the scenes video via the Oskar Blues YouTube channel and visit http://www.oskarblues.com/dont-you-want-it-the-white-buffalo to for the exclusive FREE download.

Fresh off of his latest album release on September 10, Smith will get the chance to drink a pint of his collaborative brewing efforts when he lands in Colorado to headline Oskar Blues’ two-day beer and music-centric festival happening in downtown Denver. FBAG – Fuh-CAN Beer and Guitars (www.fbagblowout.com) will take over Sculpture Park all day Friday (Oct. 11) and all day Saturday(Oct. 12) of the Great American Beer Festival where “The White Buffalo West Coast IPA” will be served with a slew of Oskar Blues beers as well a variety of craft brews from a handful of other local breweries.

FBAG – a joint party hosted by Oskar Blues Brewery and Denver-based non-profit – Love, Hope, Strength will feature full-day line-ups of a mix of local and national bands currently rockin’ the live music circuit. Smith, with full band in tow, will headline festivities on Friday night, following performances by local bands—Interstate Stash Express, Bonnie and the Clyde’s, Musketeer Gripweed and Jeff Brinkman. Kyle Hollingsworth of The String Cheese Incident will close the party down on Saturday night after Denver favorites, The Congress, and other local bands hit the outdoor stage.

Craft beer lovers in town for the Great American Beer Festival can listen to some tunes while they drink ColoRADo-made craft beers and munch on a range of menu items from three of Oskar Blues’ restaurant locations—the original Lyons-based Grill & Brew, and Longmont’s CHUBurger and soon-to-be-opened CyclHops – a bike cantina and home of REEB Cycles retail location set to open at the end of the year.

And if drinking beers and catching some killer live music isn’t enough—a portion of the ticket sales from the event will be split between the Love, Hope, Strength Foundation (www.lovehopestrength.org)and the Oskar Blues CAN’d Aid Foundation’s Colorado Flood Relief Fund. (http://foundation.oskarblues.com.)

“The White Buffalo West Coast IPA” will be flowing both days at FBAG – Fuh-CAN Beer and Guitars, but craft beer lovers roaming the streets of downtown Denver next week can also grab a pint at the following locations:

About Oskar Blues Brewery
Founded by Dale Katechis in 1997 as a brewpub and grill, Oskar Blues Brewery launched its craft-brewed beer canning operations in 2002 in Lyons, CO. It was the first American craft brewery to brew and hand-can its beer. Today there are more than 200 craft breweries canning beer. The original crew used a hand-canning line on a tabletop machine that sealed one can at a time. Oskar Blues Brewery in Longmont packaged 59,000 in 2011 and grew to 85,750 in 2012 while opening an additional brewery in Brevard, NC, in late 2012. www.oskarblues.com – @OskarBlues – facebook

What is Crooked Stave Sending to The Great American Beer Festival? 2013 Austin Beer Week Kicks Off At Craft Pride Oct. 25