Two Roads Ok2berfest Will Be Their Biggest Yet

(Stratford, CT) – Two Roads Brewing Company will be celebrating their third annual Ok2berfest on the grounds of their 100+ year old brewery and it promises to be their biggest festival to date with music, beer, games, food and more! 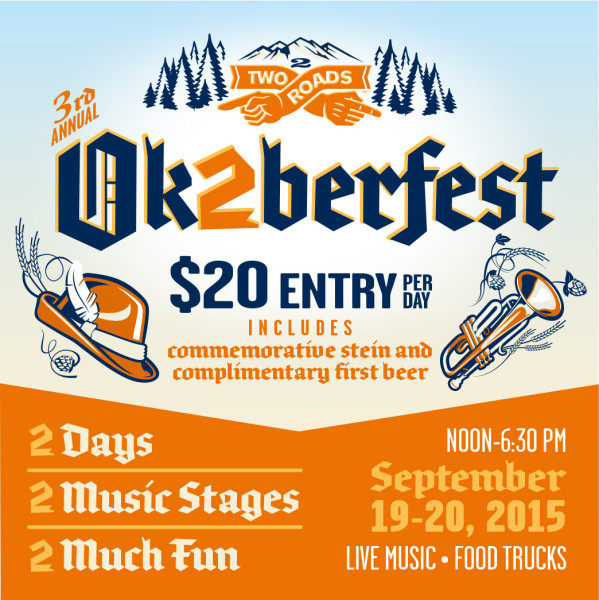 Building on the success of 2014’s event, Two Roads will be doubling the size of the 2015 Ok2berfest with two stages playing traditional German festival music and rock music. Three large beer garden tents will be set up around the campus and many local food trucks will be selling all manner of cuisines from cupcakes to BBQ.

As for the beer, Two Roads will have two special beers brewed just for the two-day festival: Last year’s Zwei Festbier will be served and they will debut a German Altbier named “Drei” created by Assistant Brewmaster and Stratford native John Rehm. Two Roads classic Ok2berfest marzen will be available as well as No Limits Hef and Ol’Factory Pils.

“To steal a quote from the Wrigley chewing gum ads, we’re doubling the pleasure and doubling the fun this year,” said Two Roads CEO Brad Hittle. “Two stages, two days and we’re cheating a little with not two but three different Ok2berfest beers, but who’s counting.”

Lastly, to the tunes.Two Roads will be rocking out with traditional German bands such as New York City’s Street Beat Brass Band. They’ll also have rock bands like local band Atlas Grey and Western MA’s Bela’s Bartok. And be on the look-out for Papa Bavarian the accordion player. He’ll be walking around both days bringing joy tableside to revelers under the tents.

The $20 entry fee gets you a beautiful, sturdy German-made traditional glass stein, your first pint and access to all the food, fun and beer.

Tickets are on sale through Two Roads website: www.tworoadsbrewing.com where you will also find more information about the day including band schedule, parking information, food truck line up and other pertinent information.

ABOUT TWO ROADS BREWING COMPANY
Two Roads opened its doors in December 2012 having earlier acquired and renovated a 100-year-old vacant, brick factory building in Stratford, CT. Its name and philosophy are inspired by the Robert Frost Poem “The Road Not Taken”—a philosophy brought to life in the beers they create using the highest quality brewing and packaging equipment.