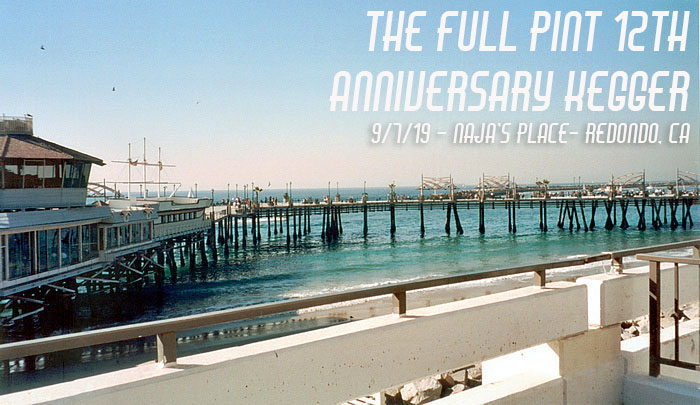 We are returning to our annual tradition and will be throwing an amazing, intimate party to celebrate our 12th anniversary of bringing you daily beer news, reviews, articles and weekly podcast. On September 7, 2019 we will be returning to Naja’s Place on Redondo Pier where we will be drinking some of the best beer in the world with you, or most loyal and loving followers. Read on for details of the VIP Session and General Admission Session that is sure to be the most fun beer event of the summer. Consider this a live document that will be updated many times between now and the event.

What: The Full Pint 12th Anniversary Kegger, an intimate beer event featuring 50 of our favorite breweries on tap. There will be a ticketed VIP Session followed by a General Admission session with a cover charge.

VIP Session: LINK TO BROWN PAPER TICKET SALE April 5th, 2019 at 12 PM PDT  $85 plus service fees and tax – From 7PM to 9PM, VIP ticketed guests will receive 1 commemorative glass, 10 taster tickets and 1 bonus pour upon entry 1 ticket to redeem food. Additional beer can be purchased once tickets are used. Tickets are valid after the VIP session is over until closing at 1:30am.

General Admission Session: Beginning 9PM, Naja’s Place will be charging a cover of $10 for entry into The Full Pint 12th Anniversary Kegger. Your cover charge will supply you with a commemorative glass while supplies last. Upon entry, you can pay as you go when ordering beer and food.

Entertainment and Food: There will be a live band playing during the VIP and General Admission sessions. We will announce who is playing at a later date. During the VIP Session, we will have a special plate. Please drop us a note if you require a vegetarian option so we can get an idea of how to accommodate.

Parking: The Redondo Pier has paid covered and uncovered parking. We strongly advise against driving to this event unless you are being driven by a friend who is not drinking.

Staying safe: In addition to using your favorite Ride Share Service, please also consider booking some lodging. Follow this link for hotels near by. https://bit.ly/2K0ZFgU

FAQ
Q: How big will the pours be?

A: We carefully determine pour size based on a few factors including rarity and strength. One of our more rare beers will be hovering around the 5 oz. size to ensure that all of our VIP guests can enjoy it. A beer like a single IPA or Pilsner will be a bigger pour, around 10 oz. or so. After the VIP session, many beers will be sold as full pours.

Q: Will there be designated driver tickets for this event?

Q: I’m a brewery rep or a distro rep, can I get in for free for VIP?

Q: But our brewery sent the beer, what do you mean I can’t get a comped ticket?

Q: But I know Big Jay, I know Jonny Fullpint, are you sure I can’t get a comped VIP ticket?