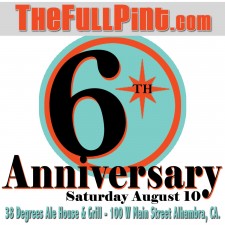 The VIP Session has sold out! Not a problem, we have our General Admission session starting at 7PM. Read below for tap lineup and details. See you soon!

The Full Pint 6th Anniversary Celebration Sponsored by West Coaster SoCal – Celebrating bringing the craft beer news, reviews and event coverage for six years. This year, we are holding a VIP Session from 5-7pm, in which you will gain entrance and have early access to the amazing list of rare and tasty beers we’ve gathered for this special day. During the VIP Session, we will be providing an appetizer spread and 6 pours before the rest of the crowd shows up. After 7PM, we will be opening the party up to the public, and will be selling commemorative glassware at the door. Purchasing the glassware will grant you access to the extra special beers to the event. Pricing on additional pours and General Admission will vary, but are sure to be of great value, to you our loyal fans.

The VIP Session will be like no other beer fest you’ve been to. You will have guaranteed seating, and you will not be waiting in a line to get your beer. We have a world class wait staff that will take your order and keep you comfortable.

We will have plenty of folks in the house from the beer industry including our Grand Marshall Greg Koch, Co-Founder and CEO of Stone Brewing Co.

Our Co-Host Clay Harding will be popping very special bottles throughout the evening, so keep your eye out for that.

There will be give-a-ways raffled off during the evening including, but not limited to hats, tshirts, brewery schwag and more.

Where: 38 Degrees Ale House & Grill at 100 W Main Street Alhambra, CA. 38 Degrees is in the heart of the revitalized Downtown Alhambra, a few miles off of the Atlantic and Garfield Exits. Public parking is located on 1st Street near the restaurant. If you have not been to 38, it is home to 38 craft taps, hundreds of craft bottles, and plenty of room to spread out and be comfortable.

Feel free to ‘RSVP’ on The Facebook Event Page.

Please email us if you may be interested in taking a beer bus from the west side or San Diego to the party. [email protected]

We hope we covered all of our bases with this, but we anticipate having good questions that will need answering. Stay tuned at TheFullPint.com and we will address Frequently Asked Questions.

About 38 Degrees Ale House & Grill
Founded by Clay Harding, Brian Sugita, Mike Fata  and Chuck Fata in 2009, 38 Degrees Ale House & Grill has proudly served the Los Angeles area with one of the most diverse selections of ales and lagers accompanied by some of the most creative and well executed food menus of New American cuisine in the area. In addition to our clean, well maintained 38 draught craft taps, we offer a wide selection of wines and cocktails, ensuring we have something to please everyone. Follow 38 Degrees on Facebook, Twitter and Instagram. For reservations and menus, please visit http://38degreesalhambra.com.