Sun King And Gen Con Reunite For Another Epic Adventure 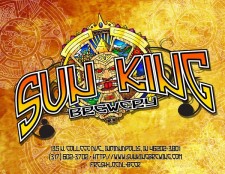 Indianapolis, IN – The Best Four Days in Gaming just got a lot tastier! 106 days and counting down until the return of Gen Con Indy for its 11th year in Indianapolis on August 15-18, 2013. Sun King Brewing is excited to announce that for the second year in a row, we will brew the Official Beer of Gen Con.

For more than 45 years, Gen Con has set the trend in gaming and has broken attendance records while attracting the biggest names in game design and manufacturing. Last year Gen Con drew more than 41,000 attendees to downtown Indianapolis. This summer’s exhibition will mark some new and exciting things for the Gen Con and Sun King Brewery partnership. Sun King will once again brew the Official Beer of Gen Con and will host the first ever Beer Garden during the festival on Georgia Street.

“Gen Con is an incredible experience and we’re excited to work with them and Indianapolis Downtown Inc. to expand the scope of the festivities,” said Sun King brewer/owner Dave Colt. “Utilizing Georgia Street is a great way to enhance the experience for attendees, but it also allows everyone the opportunity to enjoy and discover the wonders of Gen Con!”

Again this year, Gen Con will host a naming contest announced on its Facebook page (www.facebook.com/#!/genconindy) for this year’s beer that will be tapped on Georgia Street on Wednesday, August 14, 2013 at 6:00PM EST to kick-off “The Best Four Days In Gaming! ™” Live music, entertainment, and some of Indy’s best food trucks will be onsite to celebrate. The beer will also be available at many bars and restaurants throughout central Indiana during the convention.

“Sun King Brewing is an excited and energetic partner. Sun King’s craft beers are truly world-class. Having a local Indianapolis company so committed to growing Gen Con Indy with us is amazing,” said Gen Con Vice President of Sales & Marketing Scott Elliott. “Following the tremendous popularity of food trucks at last year’s show and Sun King’s successful creation of the first-ever official Gen Con beer, we have planned an experience that will be fun for Indy natives and worldwide Gen Con fans alike. This will be a can’t-miss event.”

About Sun King Brewing Company
Sun King Brewing Company is the brainchild of Dave Colt and Clay Robinson. With the help of family and friends – Omar Robinson, Andy Fagg and Steve Koers – the first keg of Sun King beer rolled out the door for delivery in July 2009. Now available on tap and in cans at hundreds of locations around central Indiana, Sun King has grown into the second-largest beer brewer in the state of Indiana. The company’s commitment to handcrafted seasonal and specialty beers has been rewarded with multiple medals at the Indiana Brewers Cup, Great American Beer Festival and World Beer Cup competitions. www.sunkingbrewing.com – @SunKingBrewing – facebook